A Russian ‘Lady Cop’: Part One 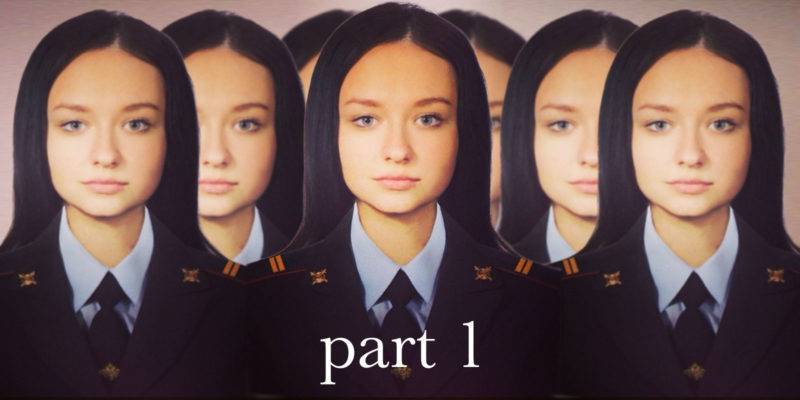 Three years ago, Olga Borisova decided to join the St. Petersburg police force. Eighteen years old and, by her own description, a petite, fashionable young woman, she wasn’t your average cadet. After a little more than a year, she quit, and has since become an active member of the Russian democratic opposition. Earlier this month, Borisova wrote for the website Batenka.ru about her experiences as a police officer. RuNet Echo is publishing her text, translated into English, in three parts. This is the first installment. Read the second here and the third here. You can find her full story here in Russian.

“It only gets worse from here.” I heard this phrase often from my colleague, Lieutenant Antonov, and at that moment I had no reason not to believe him. I came to work for the police’s patrol-guard service when I was 18 years old. Before that, I worked in retail, and I’d become bored with it. In the summer of 2013, my mom suggested that I go to a friend who worked for a security firm that responded to alarms. The work would have been pretty boring. The firm was basically a private security company, but the officers had official status. I told her that I didn’t want to sit in an office. “But if not an office, then where?” flashed through my head. So I went down to the local police department and I said, “Hi, I want to work for you.”

They brought me to the personnel department, to an office where a woman was sitting. She was a police major, and the deputy head of the station. I sat down in the chair opposite her. The police major said they were only hiring for their police squad. “What’s a squad?” I asked her. So she explained, clearly expecting me to refuse. The patrol-guard service. Patrol work. “Sounds good,” I said.

I’ve heard all kinds of things about cops. Friends used to tell me, “Cops are faggots,” but remarks like that didn’t interest me. What interested me was having my own opinion.

After Captain Tatiana Alexandrovna accepted my job application, I started to gather my documents. In order to become a police officer, it’s not required to have a higher education; they’ll take you at the sergeant level, too, with a high-school diploma. I spent two months gathering all the papers I needed. In addition to a copy of my passport and records from past schools and employers, I needed a certificate from the superintendant of my apartment building, showing that I was a responsible tenant who didn’t throw loud parties. And I needed certificates showing that I didn’t have tuberculosis, that I didn’t take drugs, and that I wasn’t nuts. And there were certificates required to show that I wasn’t pregnant, and that I didn’t have AIDS, syphilis, or hepatitis. There were just five clinics I could go to for these documents.

The next step was to see a psychologist. My psychologist turned out to be a blonde in a dress and high heels. She asked, “But you’re such a small, fragile thing. And you’re going into the patrol-guard service?”

She gave me a long written exam. I only remember that I had to invent my own animal. I had to draw a picture of it and name it. I came up with a guy who had the body of a fish and the head of a tiger. I named him “Tigerfish.” This would actually make for a cool art exhibit: animals imagined by beginner Russian cops.

“Wait for a call,” she told me, and I waited a month. Then I called her myself. “Listen, Olya…” the voice on the other line started telling me. “There’s been a bit of a force majeure with the woman who received your documents.” It turned out that all my personal files had been lost. A little later, I found out that the psychologist had actually “taken sick leave” (read: she’d gone on a bender). They basically had to hunt her down, when the lie came out. And I had to gather my documents all over again.

The last step before I was sent for training was the military-medical commission. This meeting took place in a separate building on the outskirts of St. Petersburg. I don’t know why, but when you give your passport to the registry staff, they draw a little cross on the last page. A little tag.

There were dozens of doctors. The lines were crazy. While I was standing in one of them, I found out that a cop is supposed to be at least 165 centimeters [5 feet, 5 inches]  tall. But I am only 162 centimeters [5 feet, 4 inches]. What was I supposed to do? In these situations, the local police department can submit a written request to accept a particular officer, saying they need them. The department wrote one for me.

A psychiatrist is the one who sends you to training, which can last three months, or it can last six months. I was sent for three months; they decided that I was alright in the head.

While you’re in training, you wear your “civvies,” meaning that you wear your own clothes, because you haven’t yet formally joined the police force. Working at your precinct alongside official police staff, you earn about 13,000 rubles [$200] [per month].

How did the veteran cops see me? The ones who’d been on the force for as long as I’d been alive? “Here comes some chick with fake eyelashes and a firm ass.” How did I see myself? I was inspired by the TV show “Dexter.” I imagined that I was Debra Morgan, a slender but brutal girl. “That’s what it means to be a detective.”

When the cops asked me why I’d decided to “ruin my life in order to fight drug addicts and alcoholics, instead of taking part in the fun myself,” I told them about justice and the protection of the citizenry. I talked about security, and helping people. The veteran cops thought, “Well, what can this chick do?” and they’d give me a fatherly pat on the shoulder. “Naive kid,” they’d say.

Naturally, when I showed up to train with the team, which was 80 percent men, I immediately became the testing grounds for all their pickup lines. Back then, during the mornings, police sergeant Valera picked me up (right outside my home!) in a police van—during his work hours. He’d have hot coffee with him, straight from McDonald’s. In the evenings, I’d often get a ride from staff sergeant Anton in his personal car. About six months later, Anton went on a bender, and he was dismissed dishonorably.

This text was translated from Russian by RuNet Echo's Kevin Rothrock. This is the first installment. Read the second here and the third here. You can find her full story here in Russian.