Viral Photos of Fukushima Win Media Attention Abroad, Criticism From Some in Japan 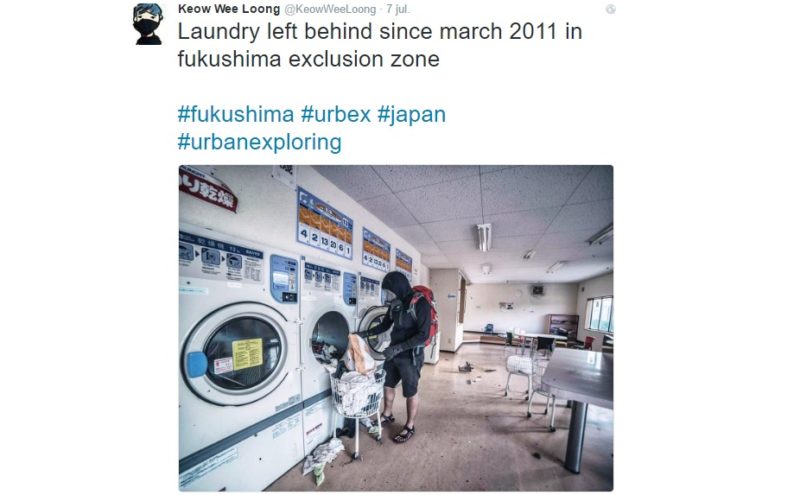 “Laundry left behind since march 2011 in fukushima exclusion zone.” Screenshot of a tweet by Keow Wee Loong.

After an aspiring professional photographer from Malaysia claimed to have snuck into the Fukushima exclusion zone, his images went viral. Then the social media backlash began.

The story is an example of the general fascination that surrounds the name “Fukushima” following the March 2011 nuclear disaster, the sense of entitlement some non-Japanese visitors feel when spending time in the country, and the burning resentment felt by Japan's foreign-born population when they feel their adopted home is being disrespected or misrepresented in the media.

In early June 2016, Keow Wee Loong, 27, a photographer from Malaysia, posted photos to his Twitter account about a trip he said he took to an abandoned town in Fukushima. Five years earlier, following a large earthquake and tsunami, a series of explosions at the Fukushima Daiichi nuclear complex forced tens of thousands of residents to evacuate from the Futaba region of Fukushima Prefecture.

Loong chose to enter this “exclusion zone” to do a bit of urban exploration and snap some photos:

By the middle of July, Loong's photos of the deserted homes, shops and streets of Namie in Fukushima had gone viral, and were picked up by Western media outlets such as the Daily Express, the Guardian and Lonely Planet.

CNN reported that Loong essentially defied authorities (and Japanese laws) by “sneaking in,” and Time Magazine even ran an interview with Loong:

See chilling photos from the ghost towns of Fukushima https://t.co/3q4IioaJAi

For Loong, getting published in TIME seemed to indicate the realization of his dream to be recognized as a photographer. He wrote on Facebook:

Back in 2013, ever since i watch the movie about LIFE ,i always wanted to be publish on TIME MAGAZINE , i try so hard shooting alot of things but yet my photo was never publish and being appreciated by anyone.. when i stop trying so hard and do what i wanted to do , my dream came true……. 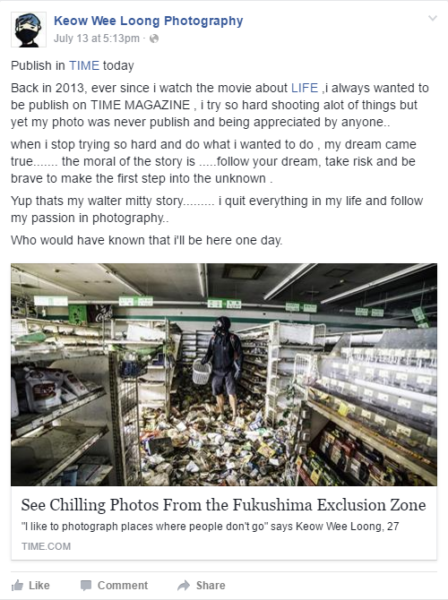 Loong previously received some fame and attention for climbing skyscrapers in Dubai and Malaysia, and also for snowboarding down a volcano:

‘Beyond disrespectful to victims’

Some netizens with connections to Japan, however, were outraged by Loong's behavior in the off-limits areas of Fukushima. There were questions about why Loong's successful attempt to break the law was tolerated or even encouraged, and also worries about what his photos would do to Fukushima's reputation.

In a Facebook group run by and for foreign assistant English-conversation teachers living and working in Fukushima, one post about Loong's adventures resulted in plenty of discussion and condemnation:

PSA: there's a photoset circulating of a man who broke into the Fukushima exclusion zone and entered people's businesses and homes to take photos.

If you see it, please don't repost it or spread it. Not only is what he did illegal, but beyond disrespectful to victims of the disaster who had no choice but to leave their homes. Additionally, his post is full of misinformation about the disaster, radiation, and much more.

Please help promote this beautiful prefecture, not damage its image further for posterity and internet fame.

In a post titled An Open Letter to the “Fukushima Exclusion Zone” Photographer, Keow Wee Loong, an anonymous blogger writing in English said:

Are you sure this wasn’t just some publicity stunt, a last-ditch effort to get your 10 seconds of Internet fame? Because from where I’m standing, that’s exactly what it was: A cheap, disrespectful publicity stunt that oozes desperation in both its vision and execution.

The open letter itself went viral among English-speaking Twitter users with an interest in or connection to Japan.

In a thread about the Malaysian photographer in the English-language r/Japan subreddit, the consensus was that, besides being an attention seeker, Loong was guilty of trespassing. One Redditor noted:

The area surrounding the buildings are open to all, but the buildings in these areas are owned by people and CANNOT BE LEGALLY ENTERED WITHOUT OWNER PERMISSION […] Kaow took photos of himself inside businesses that are privately owned and thus cannot be entered without permission, which he has admitted he did not get. In other words, he DID admit to trespassing.

Another photographer, Arkadiusz Podniesiński, who had actually covered the Fukushima nuclear disaster in 2011 and recently published photos from the area affected by the accident, pointed out that Loong may never have actually entered most highly-contaminated areas of Namie that are still off-limits to the general public.

Alfie Goodrich, himself a Japan-based photographer well-known for his editorial and advertising photography, tweeted a link to Podniesiński's blog post:

Here's a map showing roughly where @KeowWeeLoong actually took his ‘Fukushima red zone’ photos. i.e. he is a liar. pic.twitter.com/eRfvcKVLb6

In the blog post, Podniesiński carefully plots out the location of Loong's photographs and concludes:

I have visited Fukushima many times to document the destruction caused by the disaster at the nuclear power plant, and so I did not have any major problems identifying the sites where Keow Wee Loong took his photographs. It quickly turned out that all of the photos he took were not taken in the red no-go zones as he claimed, but only in the open green zone (sometimes orange) as well as on Road No. 6, which runs through the Fukushima prefecture. All of these places are open and accessible to all.

‘A lot of sensational language about Fukushima in his story’

For most of July, the story of Loong's surprising trip into the disaster-affected areas, and then the subsequent Internet outrage has been confined to English-language social media. After Huffington Post Japan reported on the controversy on July 19 and included Podniesiński's map that supposedly debunked the location of Loong's photos, the Malaysian photographer was forced to respond.

i still remember it was 4am here in asia and i received message from arkadiusz asking me on the location as he cant identify all of them so i exchange info with him, well i saw some of his work before from fukushima and i like it alot to be honest, but i really didnt expect that a fellow photographer will write such a thing to another fellow photographer and only highlight the town of namie but not others town that i've been…

Loong notes that there are some discrepancies between Arkadiusz, Huffington Post, and Greenpeace as to what is a red “off-limits” zone, but that his own GPS coordinates prove his location: 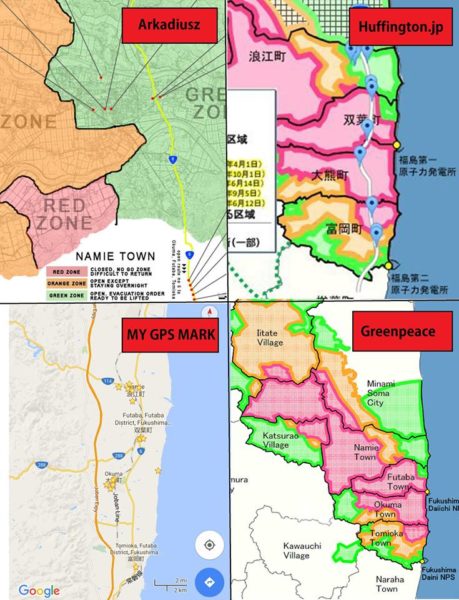 In his Facebook rebuttal, Loong also addressed many other questions raised by the Huffington Post Japan article, such as why he's wearing shorts, sandals and a gas mask in the selfies he took in Fukushima.

He explained that he had lost most of his money when he arrived in Japan, and could not afford to buy extra clothes or any sort of protective before entering what he reported to be highly contaminated areas in Namie.

He also stated that he only entered homes and businesses where the doors were obviously open; he didn't break down doors or otherwise force himself into a building. In terms of his motivations for publishing the photos, Loong said:

The Huffington Post Japan article also notes that, to date, Loong has received the most criticism from foreign or non-Japanese residents of Japan, rather from Japanese people themselves. The story is only just starting to get traction in Japanese social media, and the main narrative seems to be centered around whether or not Loong's photos are fakes.

Huffington Post quoted Fukushima University administrator William McMichael, a Canadian from Vancouver, as saying that Loong's portrayal of the areas he photographed is just not correct:

“Red zone,” “ghost town,” “restricted entry,” “left untouched for 5 years,” etc…. Loong used a lot of sensational language about Fukushima in his story. Although the whole story made it look as though Fukushima is totally unlivable, in fact reconstruction is ongoing in the areas where Loong took his photos. There are people working there.

While Loong may be the target of a social media backlash, photographer Alfie Goodrich argues that the Malaysian urban explorer may not be entirely to blame:

Very worth remembering that @KeowWeeLoong is not 100% responsible for the fact his story got so widely disseminated. @CNN @TIME @guardian