Two Argentineans Travel Throughout Latin America Looking for ‘The Other Education’ 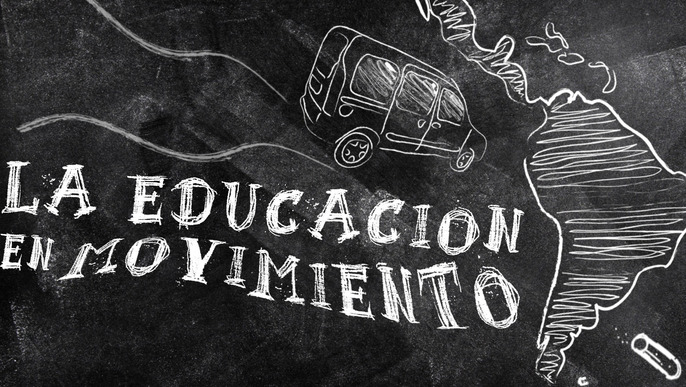 When we talk about education and educational quality, few of us stop to analyze how traditional education, despite evident improvements and constant evolution, continues perpetuating the stereotypes of a predominant culture that maintains little relation to the reality of Latin American communities. In recent decades, social movements sought alternatives to promote the integration of education into the life of the communities, which gave rise to a pedagogical discipline known as popular education, “a concept grounded in notions of class, political struggle, and social transformation.”

Along these lines of thinking, it’s been almost one year since two young Argentineans interested in studying and strengthening these movements set out on “a trip for education that fights for and creates that other world possible” throughout Latin America, in an ambitious project called La educación en movimiento (“Education in Motion”).

The leading characters of this real-life story are Malena and Martin, two young people dedicated to inspiring popular education in the neighborhoods of their city, and “Guagua Transhumante,” a Renault Kangoo 1.9 diesel truck transformed into a motor home, equipped with the basic facilities, in order to serve as simple, but comfortable lodging. As they explain on their website's homepage:

In some countries of Our America, “guagua” means “bus,” but in others it means “kid.” “Transhumante,” for nomad.

On their website, converted into a wonderful and extensive audiovisual blog, the travelers upload all the information, interviews, and clips that they have been compiling and producing along the way, in order to capture their experiences, which will be a part of their future documentary. They also have a Facebook page where they share stories, photos, and the day-to-day of their adventure with more than 2,000 followers.

The search for an educational change came about as a response to a common problem involving traditional schools’ relationship with the communities. In one of the interviews conducted during the trip, Mario Rodriguez, a Bolivian popular educator and co-founder of Red de la Diversidad Wayna Tambo (The Network of Wayna Tambo Diversity), talked about his experience in a completed investigation and how the schools “didn’t look.” On that subject he said: 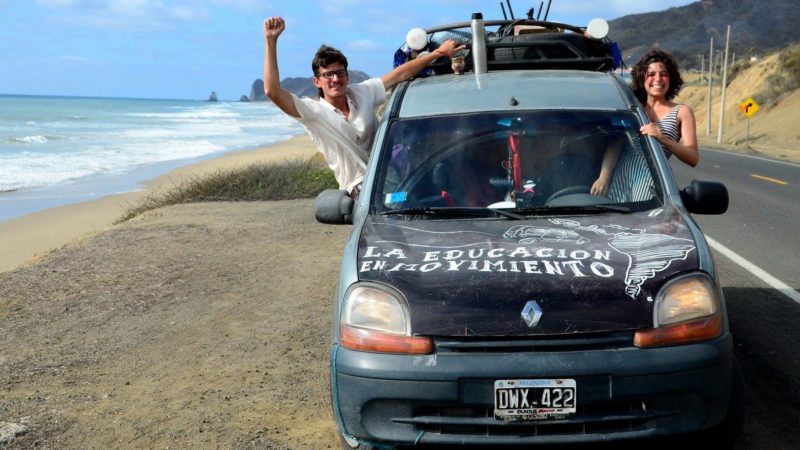 Martín, Malena and the Guagua Transhumante on the Pacific Coast heading to Quito, Ecuador. Photo shared publicly on Facebook.

One of the things that left a big impression on me regarding the girls specifically […] was that the school, at a particular point, became detrimental to their lives because if the girls went to high school, they would be included in the commercial exchange circles at the markets of the local fairs much later and a large part of their possibility to live, expand their experience, and generate wealth, occurred because of their early incorporation in these markets and systems that the school wasn’t capable of looking at, right? And so, by not looking, it wasn’t capable of educating the girls, the youth, for this scenario that was a part of their daily lives.

Numerous social movements in each corner of “Our America,” as Malena and Martin call it, have worked and continue to work with communities, non-profit organizations, trade unions, government entities, and other groups interested in the creation and dissemination of educational projects that (1) are free of Western educational, social, and gender stereotypes; (2) coincide with the local reality; (3) are financially, economically, and geographically practical according to local means of living; (4) empower the communities helping them to grow; (5) protect the environment; and (6) preserve their culture. These are the projects that La educación en movimiento (Education in Motion) looks for, studies, and proliferates through their documentary journey, some of which are described in detail in the first assignment.

In Santiago del Estero, a northern province of Argentina, members of the indigenous movements and of the poorest neighborhoods of the region communally construct the first rural university in the country. The construction itself is already a rich learning experience for all the participants because they take turns performing group tasks, from the construction of the rooms, classrooms, and bathrooms, to the preparation of food for the workers and broadcasting the radio show.

The province has provoked an enormous amount of clips and interviews due to the quantity of projects currently underway, and is also where the Mocase VC, The Rural Movement of Santiago de Estero Vía Campesina, an organization that fights for the right to the land, health, and education of the Santiagueño citizens, actively works.

The New Education Law in Bolivia: For An Alternative Education

Is a mutual effort among education, the state, and the social movements possible? The proclamation of the new “Avelino Siñani – Elizaldo Pérez” Law of Education Number 070 in 2010, kick-started the decolonization of the educational system while respecting and reaffirming the social and cultural expressions of the nations and original indigenous populations and including the original languages as a first language of education, in addition to Spanish and a foreign language.

In Peru, Popular Education Is “Alive and Kicking”

Continuing on the journey, Malena and Martin arrived to Lima where, among other things, they had an interview with Nelida Cespedes, Executive Secretary of the CEAAL, Consejo de Educación Popular del Caribe y América Latina (Popular Education Council of the Caribbean and Latin America). CEAAL is “a popular education movement that, acts as a network aiding in educational, social, political, cultural, and economical transformation processes in Latin America and the Caribbean, on local, national, and regional levels, in dialogue with the world. It is in favor of the sovereignty and integration of nations, social justice, and democracy, from the perspectives of human rights, gender equality, intercultural awareness, and an ethical, pedagogical, and politically emancipatory option.” The following video shows part of the interview where Nelida talks about the validity of popular education and the alternative perspectives they propose.

We have only shared three experiences that Malena and Martin have compiled during their first months of travel. The journey continues and they’ve passed through Ecuador, Colombia, Brazil, and Mexico and—at the time of this writing—they’re headed to Venezuela. The main purpose of their documentary trip is to interconnect the movements, strengthen them, and facilitate the collaboration and exchange of ideas in hopes that their clips will add to the debate and trigger new ideas and movements throughout the educational integration of each town in the region.

In our next update, we will present more details about the trip, the interviews, and the clips that define the rich experience of this project and show what diverse communities in Latin America have created in matters of education.

Education in Movement is a self-managed project that functions thanks to the support of partners, collaborators, and friends. By following this link, you will find the ways in which you can contribute to the project’s success. You can also check out the project's Facebook page for a journal of photos and stories.