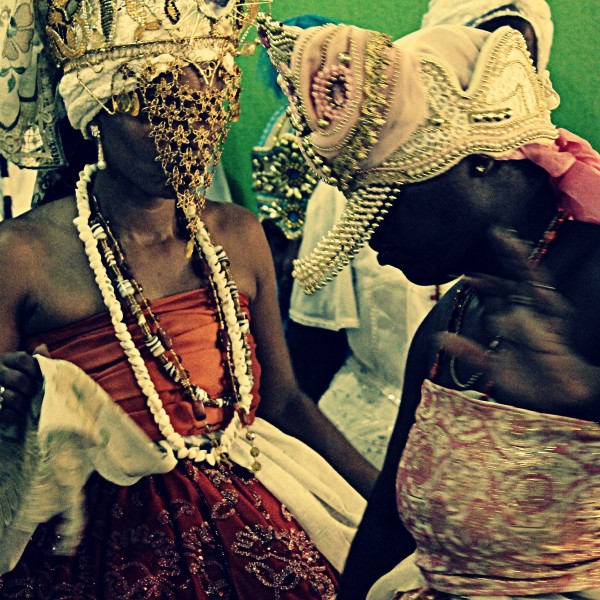 When the slave trade came to Brazil in the 16th century, African religious beliefs and rituals survived the long and treacherous journey along with it. Over the centuries, such beliefs would come to unify many of the descendants of the estimated four million slaves brought to the country, through the modern-day Afro-Brazilian religions of Candomblé and Umbanda.

During the same period of colonization, 700,000 Portuguese immigrants settled in Brazil, bringing their own particular kind of Catholicism with them. Some of those settlers would attempt to carve out a home in the unforgiving desert of the Sertão.

The two ethnic groups would come to share not only much of the same region — the Northeast — but also an important aspect between their religions — a ritual known as the fechamento de corpo, or closing of the body.

The fechamento de corpo is based on a protection prayer that results in a corpo fechado, or closed body. The ritual is meant to ward off evil — either spiritual, physical or both. If the insurance sought was physical in nature, the receiver would believe themself safe from attacks no matter the weapon, including knives, guns or even snake venom.

So how did the fechamento de corpo become a common thread running through such different religious traditions in Brazil? The history begins more than five hundred years ago.

Catholicism as a cloak

In the 15th century, the Portuguese went to Africa in search of a route to India, started producing sugarcane then moved onto the more lucrative business of slavery. During the same period, in Sub-Saharan Africa, missionaries from Portugal arrived with the aim of converting the locals.

The later manifestation of African belief systems in Brazil suggests their mission wasn’t fully successful. Rather than Africans changing their beliefs fundamentally, they ended up supplementing and/or disguising them with elements of the religion of the Portuguese slavers, Catholicism. One of the African beliefs to come under this Catholic cloak was the closed body ritual.

The Brazilian magazine Mundo Estranho wrote about this concealment in a January 2014 article:

At the time, the first Africans, of Yoruba descent, arrived in Brazil, a people that occupied the region where one finds Nigeria, Benin and Togo today. The Yoruba religion was Candomblé, but they arrived in Brazil as slaves and couldn’t worship their gods freely […] Due to this ban, the slaves started to associate their gods with Catholic saints to practice their faith in secret. As the Catholic saints are numerous, there are divinities that are identified as more than one saint. For example: Oxóssi, the king of hunting, is associated with Saint George and Saint Sebastian.

Candomblé as a religion was formalized in the 19th century. Then came Umbanda in the 20th century, which is mainly a mixture of Candomblé and Spiritism, which itself is a religious movement that believes in the existence of spirits and reincarnation.

The two African-based religions are “comparable to Christianity and Islam” since “they have completely different foundations, rites, visions and interpretations”, according to the blog Tenda de Umbanda Filhos da Vovó Rita, which is run by an Umbanda terreiro (a temple) in Santa Catarina. However, the blog explains that Candomblé and Umbanda do share some commonalities such as devotion to gods known as Orixás and the use of beads and hand drums.

And they both practice the closed body ritual. Interestingly, the ritual — also called ‘kura’, or cure — is usually practiced every year on Good Friday, before the Christian holiday Easter, throughout temple houses across Brazil.

To this end, incisions are made (what we call “openings”) and in these incisions a powder is placed, for the protection of that initiate. The powder consists of various plants and substances, but the kind used for Cures also contains the herbs specific to the deity of the initiate receiving the application.

Umbanda, on the other hand, generally employs less invasive methods to “close” the body. Instead of incisions, the chief of the temple house will use a mix of herbs and other ingredients and gently do the symbol of the cross over different parts of the body of the person undergoing the ritual.

The ingredients vary. According to the blog Sete Porteiras, elements such as keys, white chalk, herbs, olive oil, chains, amulets, prayers, candles, water, shells, steel chains and garlic are commonly used. Each temple chief will have their own particular way of manipulating the physical elements meant for astral protection.

A bandit's prayers for protection

Afro-Brazilians weren't the only ones practicing the closing of the body. Resident peasants of Portuguese origin, who would go on to be called sertanejos — akin to the American cowboy — also took up the ritual.

Located in the northeastern hinterlands, the Sertão is the Brazilian desert. Low annual rainfall in the region has historically led to droughts as well as to soil that doesn’t lend itself to crop growth. There, life is cyclical, full of sacrifice and daily battles, but despite this, its population survives and continues on. Euclides da Cunha, a Brazilian author and reporter who covered the War of Canudos, a peasant rebellion that happened in the late 19th century in the Sertão, spoke of the rural peasant’s longevity and strength, when he said “the sertanejo is, above all, a fortress”. 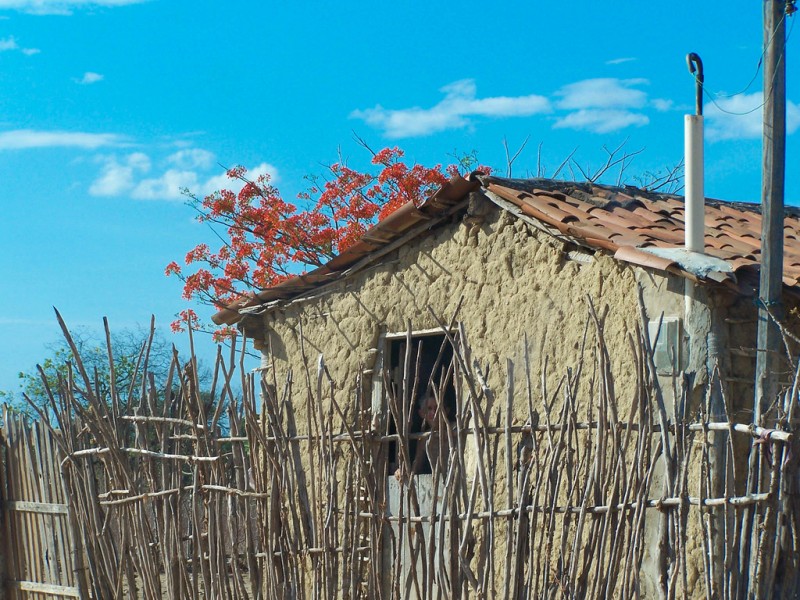 The region is home to a distinct culture. Over the centuries, oral traditions have blended and given rise to rich literature known as cordel; musical styles such as forró, frevo, xaxado, samba de roda and samba de coco; and winter festivals (during the rainy season) centering around Saint John the Baptist.

Religion in the Sertão also has a unique twist. Peasants created their own kind of rural Catholicism in Brazil, combining “magic, superstition, the presence of amulets, prayers of strength and protection, women of prayer, and the pious”, according to social scientist Max Silva D'Oliveira. This included the closed body ritual.

In the dissertation titled “O Mandonismo do Sertão” (The Despotism of the Sertão), author Luis Carlos Mendes Santiago describes various methods and ceremonies for closing one's body in the Sertão. They sometimes go beyond simple prayers. In one instance, described by famed Brazilian anthropologist Câmara Cascudo, the recipient remains standing, with the right foot over the left, in a bucket of water, while receiving hand gestures made with a key. Another manner includes having a nun sew sacramental bread — considered to be the body of Christ — under one's skin while prayers and ritual movements are undertaken.

One of the most high-profile sertanejos to practice the closed body ritual was Virgulino Ferreira da Silva, better known as Lampião. He was Brazil’s most famous bandit leader, operating in the Brazilian Northeast during the 1920s and 30s. American author Billy Jaynes Chandler, who wrote the book “Bandit King”, likens him to United States’ Jesse James, and while Lampião ardently and continuously broke the law, he never broke with his religious beliefs, which extended into the mystical.

The blog Lampião Aceso describes Lampião's beliefs in the era of nomadic banditry:

…it was common to believe that those who knew some closed body prayer and took precautions would be protected against disease and the mortal bullets of one's enemies. Lampião and his gang recited such prayers daily. The bandit leader believed that the power of faith was enough to protect them from the natural dangers of the Sertão […]. Another warrior, centuries before, became a symbol of divine protection: Saint George, who corresponds, in mythology, to the Orixá of armies and warriors. […] Lampião included in his closed body prayer not just some elements of Saint George's prayer, but also the huge religious nature of the hinterland population.

In addition to merely reciting protection prayers, Lampião was well known among both his fellow bandits and enemies for his ability to see “beyond”. Not only that, but his enemies in the Forças Volantes – solders who were contracted to fight the bandits — also took the meaning of their own dreams to heart. In the book “Lampião: Senhor do Sertão” (Lampião: Master of the Sertão), author Elise Grunspan-Jasmin explains further:

Lampião didn't just have the gift of interpreting signs announcing good fortune, danger or bad luck. It is said that he was gifted with the intuition of a fortune teller and, according to some of his companions, a ‘sixth sense': he ‘saw’ what his enemies tried to hide and also what no one was able to ‘see’.

Despite his daily prayers for protection, Lampião, who must have felt invincible during his 16-year reign as Brazil's top outlaw, was eventually betrayed, leading to his death by police troops. His “closed” body was literally opened and part of it put on public display as a deterrent to others who might take up his cause. It could be said his death is proof that the closed body ritual doesn't work, but perhaps his nearly two decades as an outlaw proves the opposite.

A recourse for those who had it roughest

Most interesting of all is not that the closed body ritual lives or dies with certain people, but that it survives culturally, even after centuries, even when practiced by descendants of two completely different social groups.

Even though rituals such as the closing of the body didn't come from Brazil, the fact that they took root there, among those who had it the roughest — descendants of slaves and settlers of the Sertão – seems to be no coincidence. Perhaps the reason it survives can be found in the landscape, both geographical and religious, where it has the most relevance — a point of convergence which just happens to be Brazil.