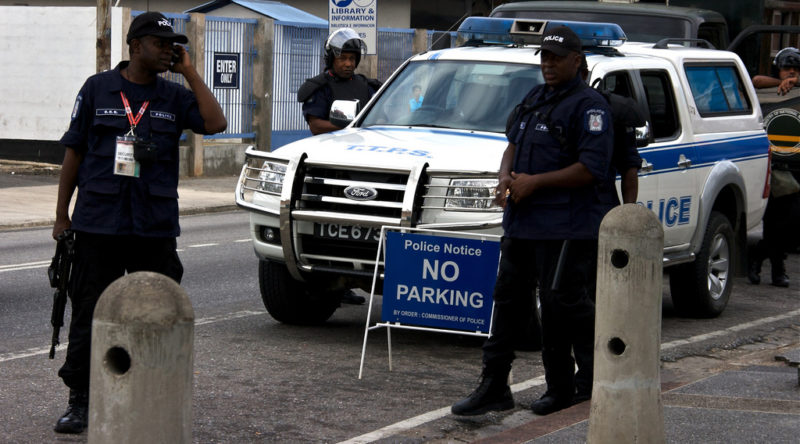 Riot police in Trinidad and Tobago. Photo by Georgia Popplewell, used under a CC BY-NC-ND 2.0 license.

Say the word “Robocop” in Trinidad and Tobago and the first thing that comes to mind is not the 1987 American action film, but Selwyn “Robocop” Alexis, a businessman and allegedly a major crime lord. Police had, in the past, arrested Alexis on various charges, including kidnapping, armed robbery, extortion, and perverting the course of justice. None of the charges ever stuck, but trouble found “Robocop” on July 17, 2016, when he died in a shootout at a car-wash compound he owned in central Trinidad.

According to reports, two others were killed in the violence. Alexis apparently killed one of the assailants before succumbing to his own injuries, and a random customer also died in the gunfire. A five-year-old boy was shot as well, and is currently receiving care at a local hospital. Police have expressed concerns that the murder could spark a turf war between rival gangs operating in the area.

The news broke quickly on social media. On Facebook, Internet users shared videos from the scene of the shootout. Many people have felt compelled to comment on the murders. Kathryn Stollmeyer-Wight shared her thoughts:

[…] This man, Selwyn ‘Robocop’ Alexis […] How many times has he been arrested & let go for lack of evidence… […]
Today Robocop was shot dead.
Two other men were also killed.
Sadly, there will be reprisal deaths because thats the way it is.
We may not live in Paris, in Nice or in Baton Rouge, but ‘doh fool yuh fat’. We are living in T&T.

You live by the sword you die by the sword. That's the only way out from living such a life style. […] An innocent man is dead and an innocent little boy is now fighting for his life! STOP THE KILLING!

So here endeth the loooooong story of #Robocop. What all yuh think, #AboutTime or #SorryForTheLoss?#Trinidad#CrimeInTrinbago

Calypsonian David Rudder, who always has a finger on the pulse of the country's politics and society (and who has a talent for highlighting their outrageous contradictions), tweeted:

Trinidad's most ” popular” criminal Selwyn ROBOCOP Alexis goes down in a hail of bullets.

In Trinidad and Tobago, euphemisms abound when it comes to describing gang leaders (and there is no court-upheld evidence to suggest that “Robocop” was one) who are often called “businessmen”, “community leaders”, or “entrepreneurs”. But because such figures may assist people in downtrodden communities, they are often revered by residents who have come to depend on them economically.

Alexis’ widow has since suggested that he was killed by “ungrateful” people whom he would continually help. When her husband realised they did not want to work in order to help themselves, she said, he stopped the handouts and this “angered” them. Making the point that “Robocop” played the role of mediator in the community, she implied that the killers wanted him out of the picture so that they could have free reign with crime sprees in the area.

One Twitter user, accustomed to the insensitivity of some local media when it comes to sensationalising violent crime, asked:

Even as Alexis’ son was giving interviews to the media, saying that his father was “a changed man” and only wanted peace, some Twitter users remained unconvinced: