A Golden Age for Cow Urine in India 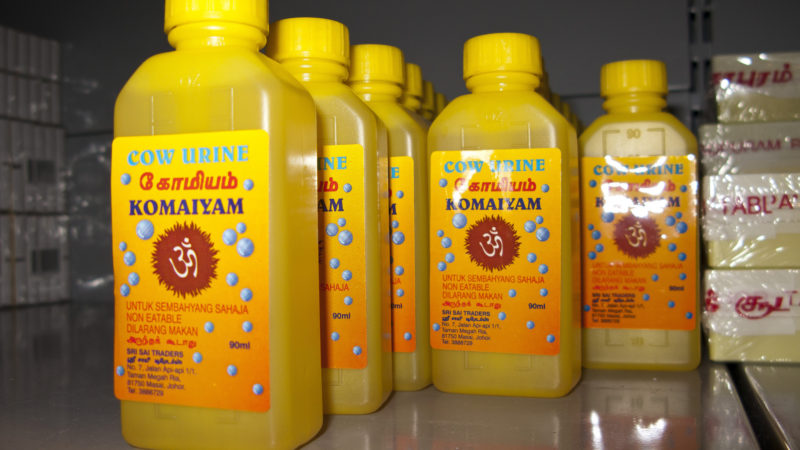 Bottled Cow Urine for religious ceremonies…seen in a super market at Mustafa's Centre Singapore. Image from Flickr by Silke Baron. CC BY 2.0

The practice of drinking cow urine is seemingly on the rise in India, given a boost by the current pro-Hindu government.

The distilled yellow liquid can sell for as much as milk, and demand is so high that Bloomberg news agency called it “liquid gold” in a story published on July 17.

Perhaps the “gold” isn't so exaggerated, if research by scientists at the Junagadh Agricultural University in the Indian state of Gujarat is to be believed. They startled the world when they claimed in June to have found gold in the urine of cow, though their results have come under scrutiny.

There's a National Institute of Ayurveda that says cow urine has gold. Shut them down already! https://t.co/wvvTs5wPcz

We boycott the cow slaughter industry for a year. The saved $ purchases cows. We separate the gold from the cow urine. Hapi economics.

They jerk off to Alchemy fantasies and claim they found from ancient literature that cow urine can yield gold.

The flurry of media attention had people talking on social media, but the truth is that cow urine, or Gomutra, as a product is nothing new in India. Indian culture reveres cows, and the animal's urine has special significance as a drink in Hinduism. Proponents of traditional Indian medicine called Ayurveda believe it has medicinal properties; drinking of cow urine is considered a cure-all, said to be helpful in treating diseases like leprosy and cancer.

Cow urine is also used in products like shampoo and floor-cleaners and plays a role in organic farming. There's even carbonated drinks made from it.

The ruling Bharatiya Janata Party certainly seems to consider cow urine important. The party holds more than a dozen patents related to cow urine and has invested $87 million in shelters for cows. Many Indian states have banned cow slaughter and cracked down on illegal cattle sales to neighbouring Bangladesh.

In 2014, Jayan Divakaran at Cluster of Thoughts blog explained the history of the use of cow urine in India:

Our Ancient Civilization always gave prime importance to Cow. The cow was not only used as domestic animal by which they had milk and various by-products, but the Cow was Respected, Worshiped and Treated like Mother during ancient times which was why our nation was known as a land of milk and honey.

Our Agriculture was solely dependent on Cow Dung and Urine which worked both as fertilizers and Pesticide for cultivation of various crops and vegetables in India. For many Millenniums our farmers use cow dung and urine and hence lands in India were much fertile and productive as compared to west. […] Many legends have been dedicated to this humble creature, Kings, Noble Rishis, Maharishis, Brahmin's, Philosophers and great Ayurveda Acharyas have given great emphasis to Cow, which is why our nation is known as the Land of the Holy Cow.

Cow urine is not only sold in India, but also in a number of countries, and is used in Myanmar and Nigeria as a folk medicine. It's also available on e-commerce sites like Amazon.

Below is one of the many videos available online spouting the benefits of cow urine and how to drink it. The man in the video even explains how to distill your own cow urine using a pressure cooker.

However, the available science doesn't seem to back up the health claims. Cow urine is a possible source of harmful bacteria and infectious diseases. One study found that cow urine administered to mice caused excitement in low doses and convulsion and/or death in higher doses.

Will self-proclaimed experts put their claims of medicinal properties of cow urine to independent testing? Or will this remain traditional knowledge, something that people continue to drink on faith? So far, the Ministry of Ayush, which was established in 2014 to promote traditional Indian medicine and therapy after the Bharatiya Janata Party government took over, has not shared anything much about cow urine neither on their official portal or on their Twitter handle.