The Lives of Migrant Workers in Thailand's ‘Little Burma’ 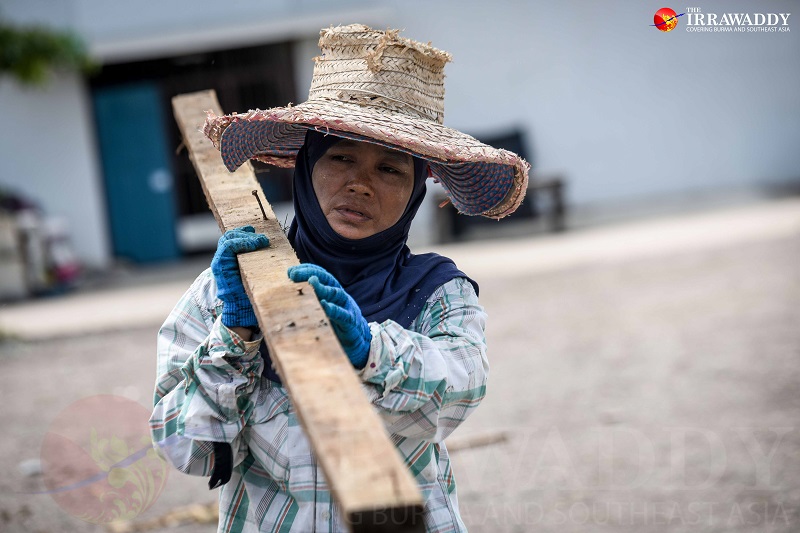 A migrant worker is pictured laboring in a construction site in Mahachai, Samut Sakhon, Thailand. (Photo: JPaing / The Irrawaddy)

This article by Nyein Nyein is from The Irrawaddy, an independent news website in Myanmar, and is republished on Global Voices as part of a content-sharing agreement.

Wandering through Samut Sakhon, just southwest of Bangkok, the image of people wearing the traditional wrap-around sarongs called longyi or tamein while speaking Burmese could make a stranger feel as though they are in Myanmar's largest city Yangon, rather than a Thai city.

For many Burmese migrants in Thailand, Sunday is the only day off each week—a time for relaxation and a brief respite from hard labor; but for thousands of other daily-wage workers, there is no such day of rest.

Those who migrate to the region are often motivated by the hope of earning better salaries. Samut Sakhon is perceived from afar as a safe haven, as the pay here is known to be higher than Bangkok, yet the fishing industry situated in the province remains infamous for its low wages and exploitative conditions.

Known locally as Mahachai, but widely referred to among foreigners as “Little Burma” (Myanmar is formerly known as Burma), the port town of Samut Sakhon hosts between 300,000 and 400,000 Burmese migrants working in some 6,000 factories and fisheries.

Ma Thein Win is originally from Myanmar’s Tenasserim Division, and has been in Thailand for five years. She had previously worked in Bangkok, but in April she moved to Samut Sakhon hoping to increase her income as a construction worker.

The 45-year-old mother of four longs to return to her home village in Dawei District.

“But we have no money and no home; how could we go back and survive?” Thein Win asked softly, all the while tidying a pile of wood next to the construction site, where men worked atop the unfinished buildings.

If there was gainful employment to be had in their homeland, many in Thailand’s migrant community spoke to The Irrawaddy of going back to Myanmar, instead of seeking work in a foreign country in order to survive. 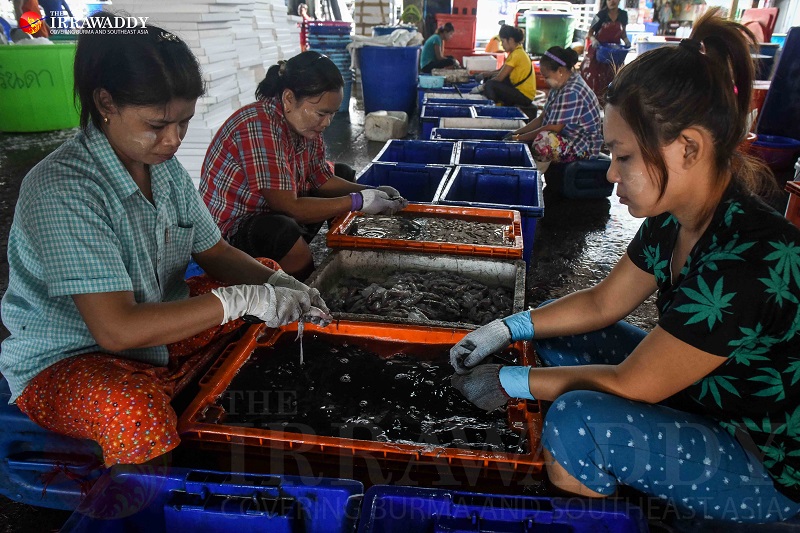 ‘We keep our patience’

In 2012, Myanmar's then-opposition leader Aung San Suu Kyi visited Thailand—and Mahachai—for the first time. She visited a second time in June of this year, this time as state counselor after her party won elections in November 2015 by a landslide. During that most recent trip, Suu Kyi met with only a small number of Mahachai’s migrants, after Thai authorities blocked access to Myanmar’s de-facto leader for labor rights groups and a large crowd of waiting Burmese nationals.

Thein Win was one of many migrants unable to be present at Suu Kyi’s talks with Burmese workers in Thailand. Reflecting on The Lady’s visit brought her to tears, which she attributed to “mixed feelings.” Suu Kyi, Thein Win still hoped, would work to “bring good” into their lives.

Burmese workers at Talaat Kung, or the shrimp market, also became emotional when discussing the state counselor’s visit and their hopes for better job opportunities, which Suu Kyi recognized during her Thai visit. Their wages are often inconsistent, ranging from 200 Thai baht (US$5.72) to 300 baht ($8.58), the latter of which is the official minimum daily wage in Thailand, but is often not afforded to foreign migrant workers.

Sorting through shrimp on a table, Aye Myat Mon told The Irrawaddy that she earns the Thai minimum daily wage for her eight hours of labor, but that working times vary depending on the availability of shrimp or other seafood. Claiming to be 18, but appearing much younger, Aye Myat Mon arrived in Thailand four years ago from Moulmein, Mon State, and lives with her sister—she said only her parents remain at the family home in southeastern Myanmar.

Securing sources to speak on the record about working conditions in Mahachai was particularly challenging; many of the individuals laboring in the seafood industry dared not make complaints to the press.

Thai employers are reluctant to attract media coverage focusing on the region’s docks, markets or construction sites; workers told The Irrawaddy that if they were discovered as having contributed to a story on Little Burma, they feared they would be later fired.

“As we are working in another country, we keep our patience, as Amay [Mother] Suu has said,” Ye Min, a worker in Talaat Kung told The Irrawaddy, before being interrupted by a superior, ending his interview. 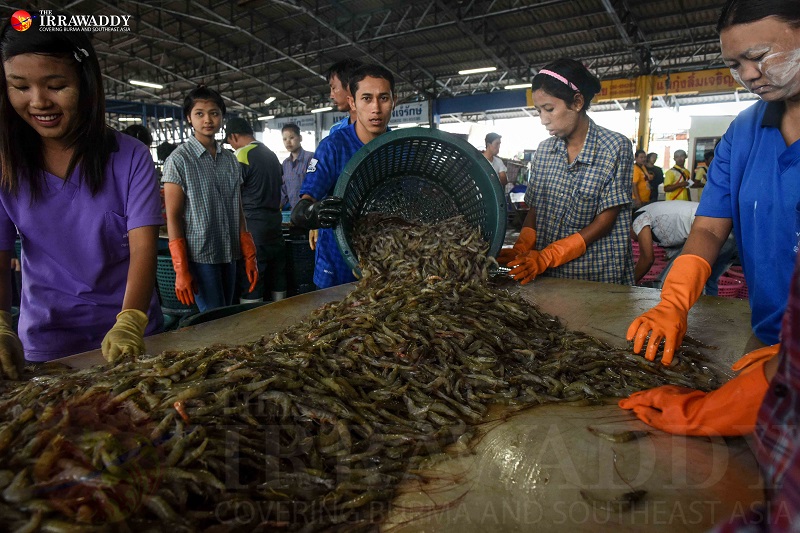 Workers also shared stories of their fear of Thai police scrutinizing their identity documents and employment papers, looking into whether they have permission to legally work in the country.

“The police ask for money to make extra income when they suspect our documents [are incomplete],” said one man working in the shrimp market, in both a hushed voice and on the condition of anonymity.

The number of migrant workers in Thailand is estimated at between 3 and 4 million, but less than half are officially registered. Different policies have been implemented to assist workers from Myanmar in obtaining legal documents, particularly when their current papers expire. This includes registration for a “pink card,” or employment permit, which can be pursued after the expiry of a four-year visa.

“Even if they are documented migrant workers, they are often being preyed upon,” said Sai Sai, a staff member at the Migrant Workers Rights Network, an organization assisting migrants from Myanmar in Thailand.

Sai Sai explained that authorities’ suspicions can be raised by a worker’s lack of Thai language skills, and can lead to an arrest for suspected drug use, or for traveling between provinces within Thailand—the “pink card” does not facilitate freedom of movement and only allows migrant workers to remain in the part of the country in which their documents are registered.

According to a Bangkok Post report, the registration deadline for a migrant work permit has been extended until July 29, after which, authorities say there will be no leniency. But a further crackdown is expected—on those both in Samut Sakhon and throughout Thailand—for whom meeting registration requirements remains difficult. 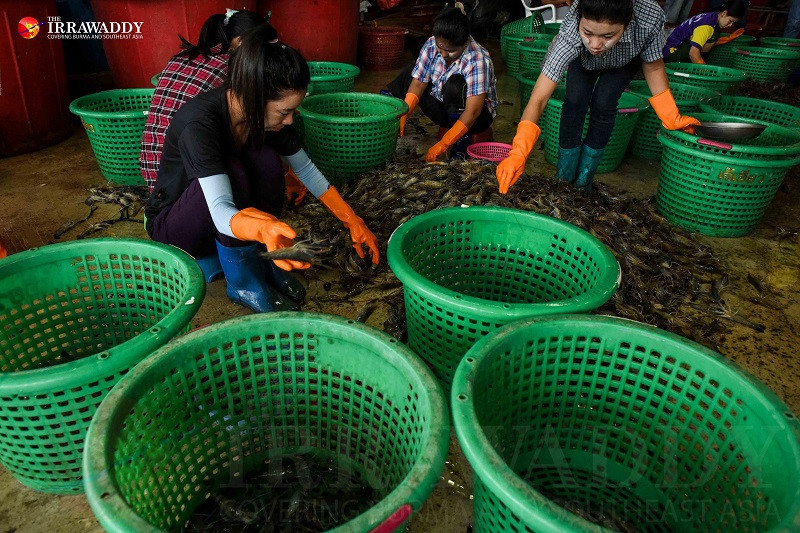