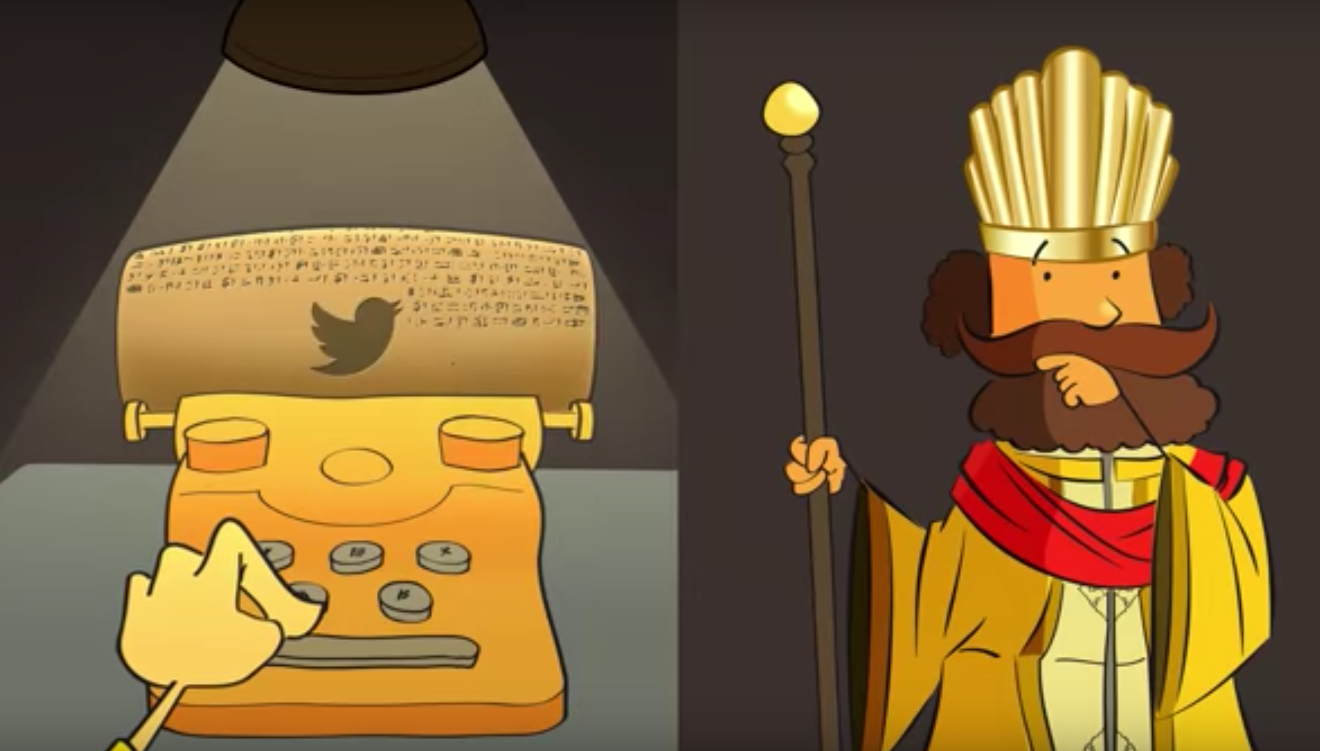 A screenshot of Twitter being written into the ancient Persian Cyrus Cylinder in an animation film for Farsi Twitter, highlighting the platforms importance for communications in Iran. Watch the video here.

A group of Iranian government hardliners, who typically stand at the forefront of policies curtailing freedom of expression, are demanding that Iran stop blocking Twitter.

This sudden change of tune has very little to do with the rights of Iranian users. Rather, they are making this move in an effort to ensure Iranian dominance in a so-called Twitter war with Saudi Arabia.

The group first took this new position in an article on Tabnak News, a conservative news website founded by former Revolutionary Guards’ commander (and current member) Mohsen Rezaee, in a piece entitled: “Has the time come to remove the filter on Twitter in order to enter into a  “online battle”? The unnamed author reasoned that Twitter's international appeal justified the move:

Twitter is an efficient media and a extremely strong microphone on the international level and before Saudi takes it over it must become controlled by Iranians. The necessary conditions should be provided for Iranian users during this period since the online war is official started whether we like or not.

The Tabnak article argues for the removal of censorship to obstruct a so-called “psychological operation” perpetrated against Iran by Saudi Arabia.

Saudi Arabia, has commenced a psychological operation against Iran on Twitter with the hashtag #Iran_Supports_Terrorism_France, trying to blame the Nice attacks on Iran with ridiculous arguments.

These concerns are nothing new, as Saudi Arabia and Iran have a long history of tensions in the region. While Saudi Arabia is often the leader in the Sunni sectarian side of regional tensions, the majority-Shiite Iran leads the other side. This past January, Saudi cut diplomatic ties with Iran when its missions in the country were ransacked following the execution of Sheik Nimr, a Shiite leader who advocated for Shiite rights in Saudi Arabia. Conflicts between the two nations also have escalated with the proxy combatants that both countries maintain in the Yemeni civil war. And last year, Global Voices documented the ongoing social media campaigns of Saudi-led Twitter accounts that fueled Kurdish tensions in Mahabad.

The Tabnak article does mark a departure from the ongoing contrast between the relatively moderate administration of Iranian president Hassan Rouhani and more conservative factions of the Iranian government. However, it should be noted that Tabnak and Rezaee form into a hardline faction that are often critical of other hardliners, such as those close to the former conservative President Mahmoud Ahmadinejad.

Before Rouhani came into office, the government's position on Internet content was often articulated by Supreme Leader Ali Khamenei. In one speech, he said:

Today, there is Internet, satellite, and many other communication platforms for easy communications. Various thoughts compete to dominate the minds of Muslims. Today however, we are at a battlefield and face a real campaign to influence our minds. This war and campaign is not a disadvantage. In fact, it is to our advantage. I am certain that we will win the war if we enter the battlefield and do what we have to do, taking out and using our ammunitions, which are our Islamic thoughts stored in our barracks of divine studies. We have to do this.

Rouhani came into power in 2013 with promises of increasing freedoms online. While a conservative majority in other parts of the Iranian government has made this promise difficult to keep, they have had some victories.

In January of 2015 they prevented the filtering of popular messaging applications such as Whats App and Viber by blocking the decisions of the hardline judiciary in implementing their filtering rulings. In January of 2016 they also brought the CCDOC (Committee Charged with Determining Offensive Content) towards a decision not to filter Telegram. This was no small feat, given that the CCDOC is managed by the judiciary (not to be confused with Iran’s Ministry of Justice), which is typically a conservative body.

Iranian Internet users have often wondered why these decisions have not been extended to unblock Twitter and Facebook, platforms that were censored following the 2009 Green Movement.

What is the the difference between Instagram or Telegram and Twitter where only the latter is blocked in Iran?!

The Tabnak article continues, specifically highlighting Twitter “Trends” as a reason for Saudi Arabia's success in dominating Iran on Twitter:

It seems that considering the current situation and the active presence of Saudi Arabia on Twitter for the psychological warfare against Iran through “trending” anti-Iran issues, we must at this time gather the deciding organizations to considering the unblocking of Twitter.

The feature of Twitter “Trends” that amplifies certain social media campaigns does not in work in Iran, since the Iranian government blocks the platform, which prevents Twitter from tracking the geolocation of trends inside the country.

It is unclear how far Tabnak's call to re-open Twitter will go. Tabnak founder Mohsen Rezaee himself has been a member of Facebook since his 2013 bid to run for President and on Twitter since 2015.

In a Facebook post from earlier this year, Rezaee stoked Israeli and Saudi tensions with Iran with this statement to his followers:

The day that #Israel, today's friend of the Al Saud's are defeated by Iran, the people of our region will celebrate with cries of “long live Iran”

A follower responded to Rezaee's post, mocking the fact that he had circumvented Iranian laws and censorship for religious reaons:

The day you use a circumvention tool for religious justifications?

The irony of Iranian officials belonging to social networks that are blocked in the country has long been acknowledged by Iranians.

In its conclusion, the Tabnak piece argues that the only dangers Twitter poses to Iran are through Saudi-led efforts:

The truth is Twitter does not have a negative moral dimension just a security dimension that was magnified through a anti-Iranian movement led by Arabs.

Previous official reasons given in 2009 linked Twitter to foreign efforts to promote “sedition” with the Green Movement protests.

This is part of a new tide of political figures previously inclined to condemn and censor media such as Turkey's Recep Tayyip Erdogan who took to social media to counter the recent coup,.