In China, a University Degree Isn't Always a Golden Ticket to Employment 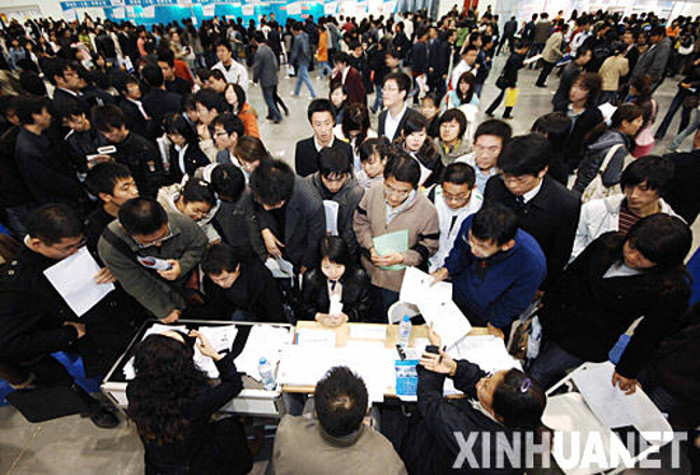 Chinese graduates at a job exhibition in 2007. Photo from state news agency Xinhua.

Once again, more than 7 million students in China graduated from university in May. If you add in the 300,000 overseas graduates and previous years’ graduates who are still looking for jobs, that means more than 15 million young people were reportedly seeking their fortunes at the same time this year.

As a newly rising economy power, China is considered to have a huge job market. Indeed, when you google “find a job in China”, millions of results pop up. But the reality is many graduates struggle to find work after finishing their studies. In fact, a popular saying that has arisen in recent years holds that “graduation equals unemployment.”

In 2013, the unemployment rate of graduates from colleges and universities two months after graduating was 17.6 percent, according to Times Higher Education; for those in rural areas, it was 30.5 percent. That's higher than the general unemployment rate (or at least what's thought to be the unemployment rate, since data out of China is unreliable). As China's economy has slowed down in the past two years, the graduate unemployment problem only has worsened.

The frustration of China's younger generations is reflected in a number of widely circulated social media and mobile text messages, such as the following:

When we were born, the infant formula was toxic; when our bodies were in development, we could only consume junk food; when we attended kindergarten, the school fee was out of control; when we graduated from university, we were unemployed; when we tried to earn our living via the stock market, it collapsed; when we tried hard to fall in love, we found out all handsome guys were gay; when we started chasing after the mainstream [culture and values], they were no longer mainstream.

What university means: management is like prison, the quality is for hooligans. [Students] learn how to kiss in public, consume like a white-collar worker, daydream in class. Skipping classes is common, dormitories are like internet cafes. Taking exams becomes a profession, only the aristocracy can afford school fees. Thesis looks like Baidu search results. Everyone gets short-sighted. The food in school canteens is for feeding animals. Having a job is like a dream. Graduation equals unemployment. Jobs [available] on the market are for rural-to-urban migrants.

Many believe that part of the problem of unemployment for recent university graduates is related to the policy of higher education expansion since 1999. Back then, only about 35 percent of high school graduates entered post-high school education including colleges, technical schools and universities. But in 2015, the percent was more than 80 percent, and about 40 percent became undergraduates at universities. For big cities like Beijing, the number of students entering university was more than 70 percent.

Some argue there aren't enough jobs for so many university-educated people. On popular social media site Weibo, Lydia commented on the over-supply of graduates:

Graduates are everywhere, and college students are not worth anything now. How could you tell the difference?

Another Weibo user, “Nomadic hero”, wrote that a side effect of expansion is a drop in the quality of graduates in general:

The fight for educational justice to make sure the majority of people have the chance to go to school is good. But it is true that the quality of students is getting worse. It is the university, rather than students, that lose value.

Graduated for two years already, but I am still working on how to find a job!! Why is my life so miserable?

Though it is difficult to find job, many still consider entering university as the best path to obtain specialized skills and climb the social ladder — hence they do not feel regret for the choice. “HaiDe XiaTian” even chose to carry on his studies in postgraduate school:

I feel regret [about pursuing higher education], but there is no other way and I have to carry on down this path. Going to postgraduate school will be my last chance to enter an ideal university.

The graduation ceremony is called commencement, which should stand for a new beginning for graduates, but many see it like an individual struggle, such as Weibo user UsedToBe5:

Finding a job is a tough thing because you have to fall down and get up again and again. Of course, I have no one to blame since I choose it myself.

Not everyone is gloomy about the situation. A hashtag on Weibo called #graduation doesn’t mean unemployment# gives the topic a positive twist, and messages try to offer support, tips and personal experiences.

The latest status with the above hashtag was published on July 12 by Weibo user “WanAn Xin XinYu,” who was one of the 7 million newly graduated young people in 2016:

I am going to have another interview today, and I wish I could start working tomorrow. #graduation doesn’t mean unemployment# Add oil [a phrase of encouragement]! Although I have been unemployed for a month.