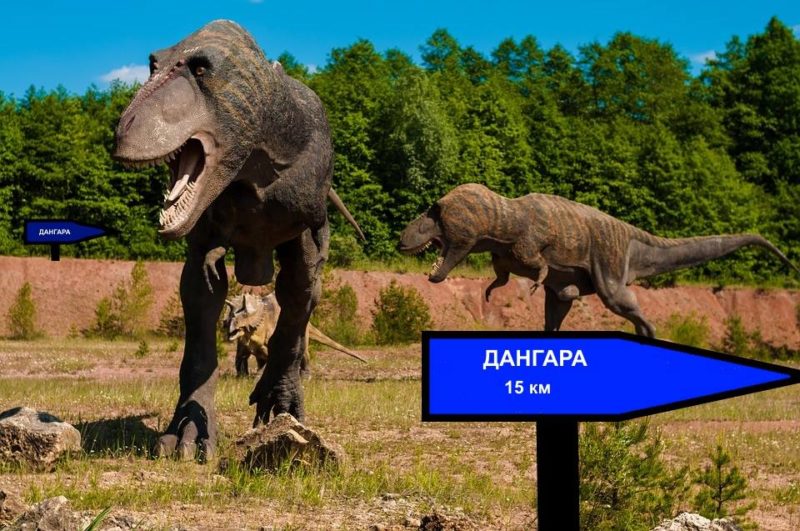 One of the humorous reactions to scholars claiming that a town in Tajikistan is 4,000 years old. The image depicts dinosaurs roaming the earth with two road signs pointing the way to Danghara. Posted on Asia-Plus Media Group's Facebook page, July 16, 2016.

Looking for the ever-more-ancient roots of modern places is an important business in Tajikistan.

The government uses newly discovered historical anniversaries to justify lavish construction projects and massive festivities all over the country.

Historians acquire different perks for extending national history as far back in time as possible.

As for ordinary people, many of them are happy to learn that their towns and villages are older and more significant than they thought.

Yet often the announcements of new historical discoveries in the country draw ridicule.

On July 14, the president of Tajikistan's Academy of Sciences claimed that Danghara (also spelled as Dangara), a small town in the country's south, is more than 4,000 years old.

For many people in the country, this rural location is a synonym for “backwater town”.

However, Danghara is important as a birthplace of the country's president as well as a number of other top government officials and MPs.

The news instantly became a subject of ridicule.

Many people poked fun at scholars by proposing sarcastically that the town is even more ancient than they claim.

Why think so small? The scholars have made a minor mistake; if they dig deeper, they will establish that this is the oldest civilization on earth.

Danghara is more ancient than Rome!

Danghara is the ancient Atlantis

Adam and Eve were also from Danghara )

They had a high civilization there already in the dinosaur age

Yes, [the town] is older than mammoth feces )))

And Mubin proposed going even further back in time:

Life as we know it emerged in Danghara.

Some internet users have questioned the sanity and motivation of scholars responsible for the discovery.

Dear academicians, don't you have anything better to do? It seems like yours is an academy of stupidity rather than sciences.

With an appropriate monetary incentive, scholars would do anything and everything

It was not clear from the news report whether local scholars had reliable evidence to support their claim.

One Internet user reacted to the report by posting a funny image.

The image depicts the president of the Academy of Sciences as saying that Danghara is 4,000 years old. When asked whether he has evidence to back up the announcement, the scholar responds, “I swear on my mother [that is is so]”. 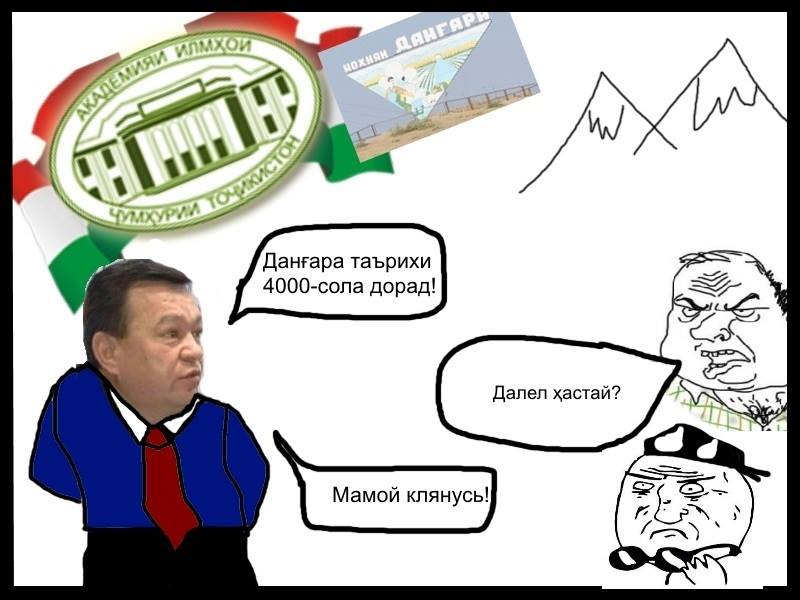 Farhat sarcastically explains why the ancient Danghara did not survive.

In doing so, he draws an analogy with present-day Tajikistan where the natives of the town fill a disproportionate number of middle-level and senior government posts:

It is clear why the ancient population left [Danghara]. History is cyclical; one of the natives of Danghara became a ruler of the Sarazm civilization 4,000 years ago. The remaining inhabitants of the town moved to the cities in order to get [government] posts.

The abundance of such jokes does not mean that everyone in the country distrusts the official historical narrative.

Many people in the country, perhaps the majority, believe it.

It is also important to note that the Facebook page of Asia-Plus, the news agency that first shared the news of the discovery, is a place that is particularly prone to humorous reflections.

Over the last several months, the agency accompanied many of its news reports shared on the page with caustic comments that drew public attention and set the tone for subsequent discussion.