These African and Scandinavian Musicians Create Sweet Sounds in Copenhagen 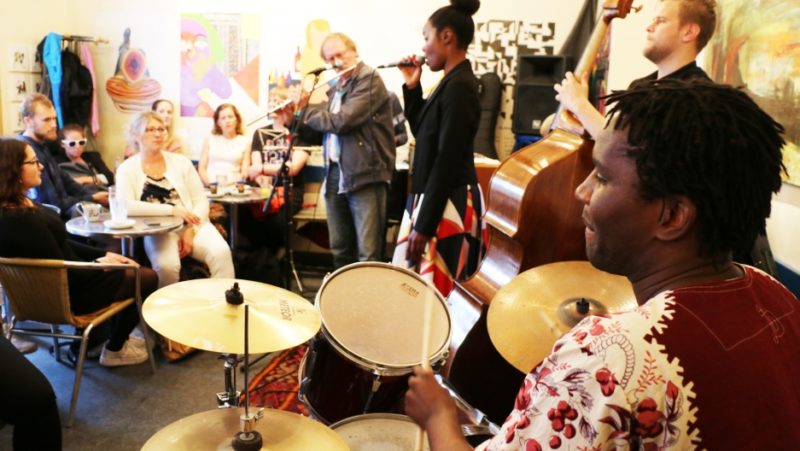 Musicians from Scandinavia and southern Africa play a jam session at a Danish café during the Copenhagen Jazz Festival this month. Credit: Sonia Narang

This article by Sonia Narang originally appeared on PRI.org on July 12, 2016, and is republished here as part of a content-sharing agreement.

During the annual Copenhagen Jazz Festival in July, people can hear music coming from street corners, open-air plazas, and iconic jazz clubs across Denmark’s capital. On one Sunday afternoon during the recent festival, I saw a little Danish café turn into a meeting place for global cultures.

Inside Café Blå Time, which means “Blue Hour café” (or “Blue Time café”) in Danish, a crowd gathered to watch a line-up of international musicians: a drummer/singer from Mozambique, Swedish brothers who play the saxophone and piano, a singer adopted from Swaziland who now lives in Denmark, a Finnish bass player, and a guitarist from Namibia.

I caught up with Mozambique-born musician Deodato Siquir before the jam session at the café. I’d seen him perform in front of a packed house at another venue in Copenhagen the previous night, and wanted to find out more about his music. 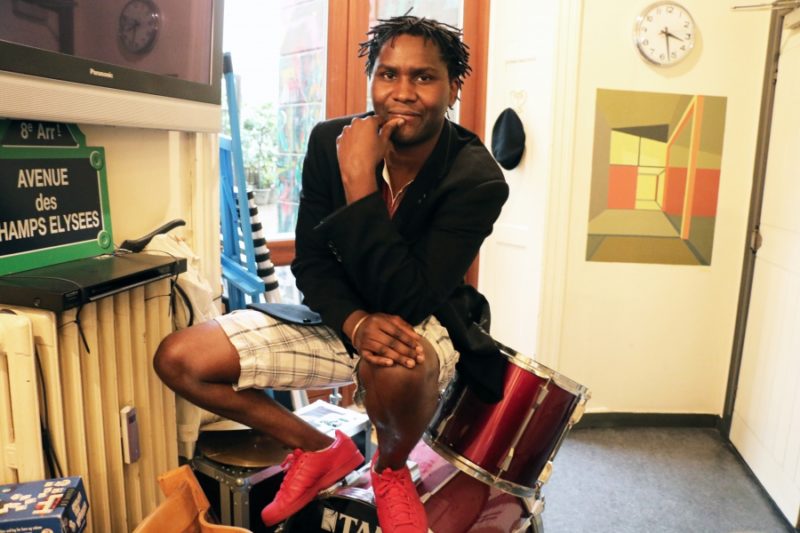 Deodato Siquir is a singer and drummer from Mozambique. He moved to Scandinavia in his mid-20’s and plays with musicians from around the world at the annual Copenhagen Jazz Festival. Credit: Sonia Narang

In the 15 years he’s lived in Scandinavia — including seven in Copenhagen — he has built up a large network of friends and supporters.

“I had to learn the language, I had to learn the codes, and all the habits [of Scandinavians],” he says, and at the same time “not break the connection with my roots.” He sings in his first language, Ronga, and writes songs about Mozambican life. One of his most poignant songs, “Para Mutema,” is about his late mother.

In his shows, he brings together what he calls “an all-star” band of musicians who gel on stage despite disparate backgrounds.

“A Swedish guy, and a Mozambican guy, and a Danish guy, they’re speaking one language, which is the music language,” Siquir says. “That’s what we want to reflect to the society, that it’s possible.”

He’s joined on stage by two brothers — a pianist and a saxophone player — from Gothenburg, Sweden. The piano player, David Bäck, is Siquir's good friend and part of his trio.

“When we play the music, people in the audience feel like this is like my kitchen at home with the family, and we talk in a sweet way together,” Bäck says.

He enjoys playing with people of different musical styles, and says, “African music is so rhythmical and ecstatic, so it’s good for me when it takes some breaks and relaxes, and then you go with the energy again.”

While I’m waiting for the jam session to begin, I strike up a conversation with Maria Thandie Stensgaard, who I spotted in the crowd at Siquir’s concert the previous night. I find out she’s a singer who performed 16 gigs at last year’s jazz festival.

“My dad is a Zulu and my mom is from Swaziland,” she says. She was adopted by Danish parents who lived in South Africa during apartheid, and now live in Denmark.

“They’ve been quite a beautiful guidance for me, because they were the Caucasian people in the black world during apartheid and now it’s me, a little black girl in a white world,” Stensgaard says. 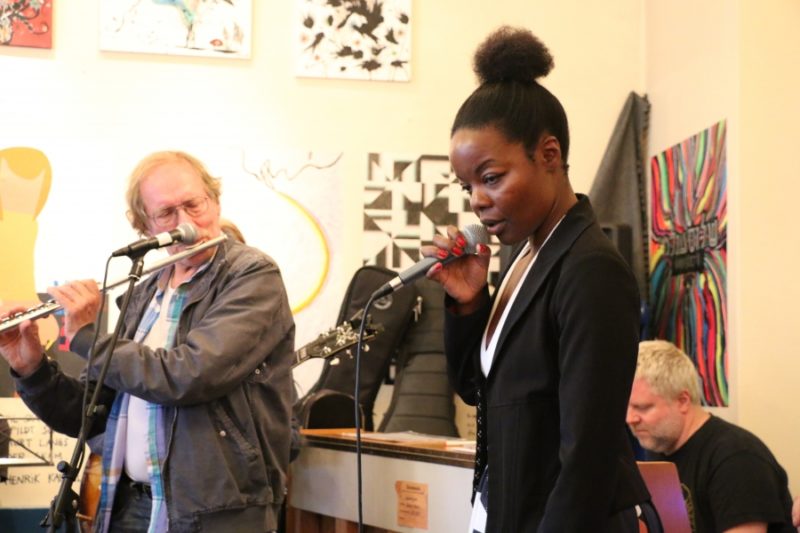 Stensgaard grew up with gospel and blues, and says she mixed her African inspirations into that music. “I’m really a storyteller,” she says, adding, “I’m a live person. I never wanted to record. That’s my thing. I need the crowd. Whatever they bring, I’ll have that conversation by singing, that’s what I love.”

Today, she takes the stage to sing the jazz classic, “Summertime,” a lovely melody that captures the entire café’s attention.

“We do what we do best on stage, and it’s like we’re having this conversation with our instruments and getting to know each other by what we love the most,” Stensgaard says. “And, for me, that’s magic, yeah. I love it.”

A little later, singer and guitarist Jackson Wahengo adds some more lively flavor to the jam session with his rhythmic blend of African folk and pop. He grew up in the refugee camps of Angola singing freedom songs for his country Namibia, which became an independent nation in 1990.

Today, as Wahengo sings a song in his mother tongue of Oshiwambo with a Swedish band in his new hometown of Copenhagen, it truly feels like a place where cultures mix.