Painkiller Jokes, ‘Who Cares?’ and Other Chinese Reactions to the South China Sea Ruling 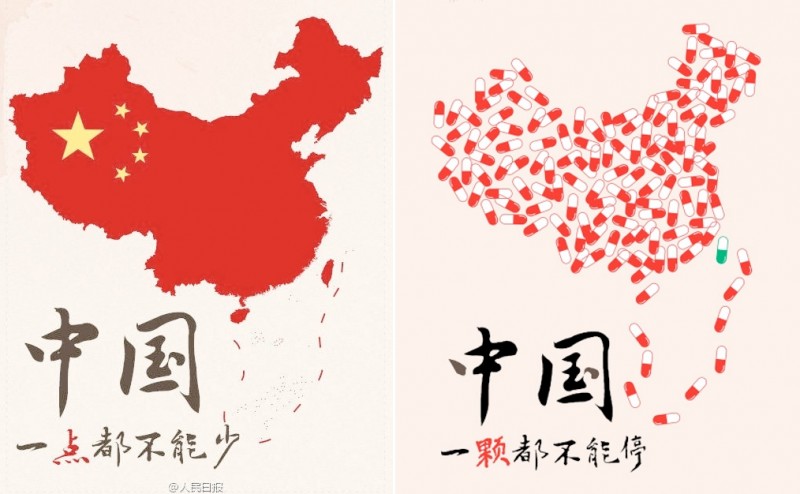 The Permanent Court of Arbitration in The Hague recently dealt a diplomatic blow to China when it rejected its use of a “nine-dash line” to claim sovereignty over large parts of the South China Sea.

As anticipated, China's state-controlled media outlets immediately spoke out against the tribunal's judgment, saying Beijing would neither acknowledge nor accept the ruling. And on Chinese social media, patriotic netizens posted a nine-dash map to echo the government stance with the caption: “Not a single dash less.”

While others simply asked: South China arbitration, who cares? The video below was one of several that circulated among overseas mainland Chinese:

The tribunal ruled that the disputed land are either rocks or low-tide elevations such as reefs that cannot sustain human life; as they do not qualify as islands, they don't give their owner extensive rights over the surrounding waters.

It also said China's interference with Philippine fishing and petroleum exploration, as well as its construction of artificial islands within 200 nautical miles off the coasts of the Philippine mainland islands, have violated the Philippines’ sovereign rights.

The judgment was viewed as a huge diplomatic setback for Beijing. The implication is that other countries, including Vietnam, Malaysia and Brunei, which all have a stake in the South China Sea, now have a legal basis to complain about China's economic and military activities in the disputed sea.

The history of Beijing's maritime sovereignty claims go back 70 years to before the Chinese Civil War and the creation of today's People's Republic of China. In 1947, the Republic of China (ROC) used an eleven-dash line to justify its claim to some of the islands in the South Sea, which had been occupied by Japan during the Second World War and handed over to the ROC after fighting stopped.

Two years later, the communists defeated the nationalist Kuomintang forces, and founded the People's Republic of China. They stuck by their predecessor's claims and later changed the eleven-dash into nine dashes in the early 1950s to bypass the Gulf of Tonkin as a gift to their North Vietnam communist neighbor.

‘The whole world is watching China fall into the trap’

Online, there weren't many comments calling for extreme nationalistic protests or military actions. In fact, most posts were attempts in some way to salvage China's reputation amidst its diplomatic disaster:

The Philippine people were demonstrating outside China's embassy, but the Philippine embassy in China was under protection from Chinese police. This is the difference between a strong state and small state. China does not owe the world anything, but this world has never been gentle [to China].

Negotiation is a peaceful means to resolve conflict. Only the hideous US and Japan want to see war. Hence, it is right for us to be patriotic. But some fellows who keep calling for military conquest are not calm enough. This year, we have flooding and Typhoon in the South, the U.S put up a trap for China. We have to stay calm. China shall not lose a single dash!

The attempt to save face is more conspicuous in a number of videos called, South China Arbitration, Who Cares?, which is circulated among overseas mainland Chinese’ social circle like the one on top.

Among Chinese communities outside of mainland China, much of the commentary pointed the finger at Chinese President Xi Jinping's lack of diplomatic skill. On Twitter, @tom2009cn said:

[China should not] face such embarrassment concerning the South China Sea. The facilities on the few islands have already agitated the US, but Xi Jinping insisted on waving his sword and bringing the country to the verge of war. Now the arbitration has put an illegal stamp on China's exercise of its rights in the South China Sea. This is a serious defeat. It is another version of the Cuba missile crisis. The whole world is watching China fall into the trap. So stupid.

In February 2012, China's diplomatic stance regarding the South China Sea was that “no country including China has claimed sovereignty over the entire South China Sea.” Yet as clashes over fishing vessels escalated, China, Vietnam and the Philippines all stated that they held the rights to the disputed sea.

In April 2014, China started building Mischief Reef, which is located in the Spratly Islands, into an artificial island, and in August of that years, a Chinese fighter jet intercepted a US Navy surveillance aircraft.

In February 2016, satellite images showed China was manufacturing land on Tree Island and North Island in the Paracels, and again Chinese jets intercepted a US surveillance aircraft in May.

China's economic and military activities have already disrupted the unity among Association of Southeast Asian Nations member countries. Now that Beijing has lost its legal ground, the whole world is watching how it will react to the crisis. Simply saving face cannot ease the pain; political cartoonist Badiucao suggests taking painkillers instead — nine, to be exact, and “not a single pill less”: