In China, Protests Against the South China Sea Ruling Skip the Streets for Cyberspace

U.S. Navy and Republic of Singapore ships steam through the South China Sea in 2008. PHOTO: Public Domain from the US Navy via Wikimedia Commons.

“The Hong Kong editors would like you to go to the Philippines Embassy today and see if there are protests,“ my colleague had written. “Are you free?”

As my iPhone buzzed, on my laptop Xinwen Lianbo, arguably the most-watched news show in China, was displaying a meticulously drafted government statement. Read out word-by-word live to the nation by a Chinese state TV anchor, it denounced a long-awaited international ruling that had just slapped Beijing in the face.

Less than an hour before, my iPad screen had flashed with news alerts that quickly became China’s PR nightmare: an international tribunal had dismissed Beijing’s expansive claims over the South China Sea, where China has been locked in a bitter territorial fight with a number of South East Asian countries. The ruling on the case, which had been brought by the Philippines in 2013, quickly put China on the defensive.

“I’m heading out now,” I replied. As if responding to a disaster reporting assignment, I hastily threw my notebook, phone and wallet into my bag and ran out to catch the taxi I’d booked online a few minutes before.

There was less traffic than I anticipated. Before my taxi driver could finish his rant about how China must act tougher in the South China Sea, we’d arrived at the road leading to the Philippines Embassy in Beijing. What I saw was a familiar scene: the police had already cordoned off the area, in anticipation of potential protests. 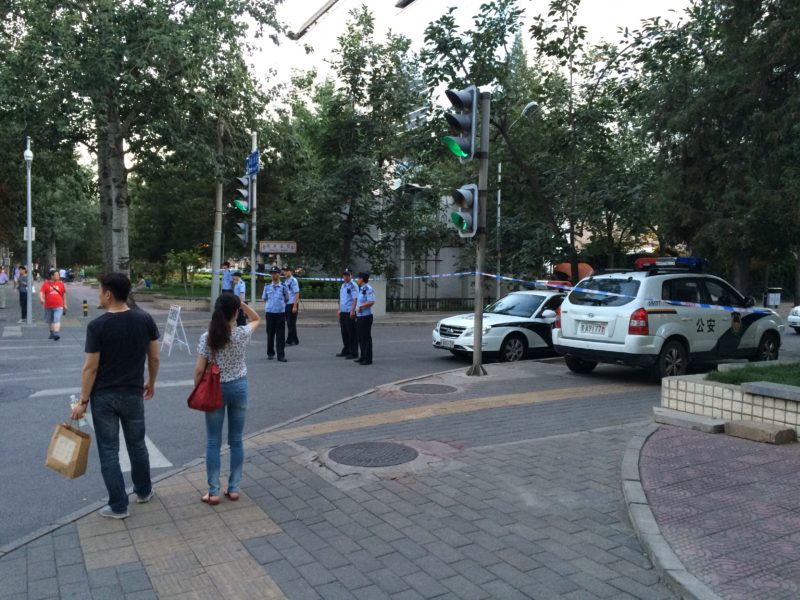 All quiet near the Philippine embassy the evening of the announcement of an international tribunal's ruling disputing China's claims over the South China Sea. “. . . this time people were flooding China’s social media.” Photo by the author.

But no sign of a rally. Pedestrians, cars, electric scooters passed by without appearing to notice the presence of the police, who numbered about a dozen. The only other journalist there was the China correspondent for NOS, the Dutch national broadcaster, whom I’ve worked with in the past.

I breathed a sigh of relief. Not a single protester ever showed up, maybe because people were either just leaving work or arriving home for dinner. After notifying my colleagues that no protests were taking place, I flagged down a taxi. On my way home, I tweeted: “Police have cordoned off the Philippines embassy in Beijing in anticipation of protests. No sign of protests yet.”

As I scrolled through my WeChat moments in the taxi, I was inundated by a cascade of online commentary, some of it with ultra-nationalistic overtones. Unlike the 2012 anti-Japanese protests that erupted in a number of Chinese cities in reaction to the Diaoyu Islands dispute, and had at times turned violent, this time people were flooding China’s social media, their protests loud and explicit.

The online comments were overwhelmingly dismissive of the court ruling. They ranged from vocal support for the Chinese government, which has labeled the arbitration a farce, to calls for a tougher stance from the government and mockery of the Philippines.

“The South China Sea belongs to China!” many declared. A tongue-in-cheek comment widely shared on social media: “I’m willing to donate all my ex-boyfriends to fight in the South China Sea if a war were to break out.”

Some people’s animosity towards the Philippines took the form of racial slurs. A cartoon circulating online depicts China as the “papa” and the Philippines a “banana” nation. The cartoon shows the “papa” slapping a smaller sobbing banana-eating man, with the caption:” You’re just a guy selling bananas, how dare you fight with me over the South China Sea!”

Some Chinese have called for a boycott of imports from the Philippines. Official data shows bilateral trade between China and the Philippines amounted to 45 billion USD last year, a 2.7 percent increase over the previous year.

Nine dashes, and a historic claim

Surrounded by China to the north, and a number of South East Asian countries, the South China Sea covers an area of around 4 million square meters. An estimated 4 trillion USD worth of goods passes through its waterways annually. The area is also rich in oil and gas deposits.

Beijing has been building artificial islands and airstrips in contested areas, claiming it has the right to do so because it’s Chinese territory. China says its sovereign right to the sea derives from ancient maps. Other nations, including the Philippines, accuse Beijing of using its economic and military clout to seek dominance in the region. 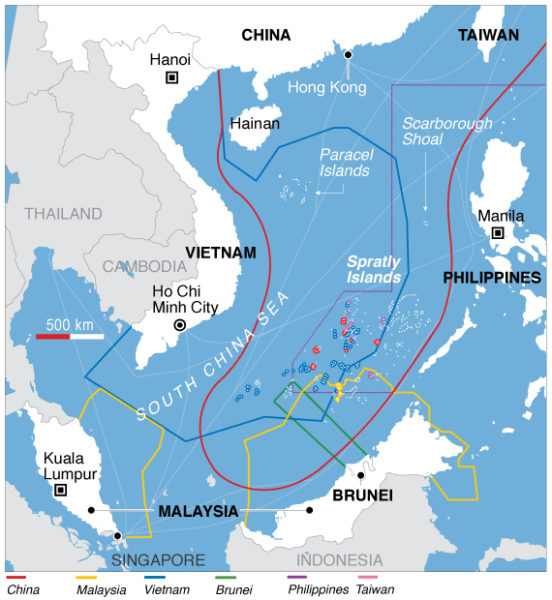 Meanwhile, nationalism in China has grown under President Xi Jinping, as he routinely promotes his “Chinese dream”, which envisions a stronger China both economically and diplomatically. Ask ten Chinese, and nine will tell you unequivocally that the South China Sea belongs to China.

By July 14, the hashtag ##China can’t lose even one dot## was the top trending topic on Sina Weibo, generating six million comments that were viewed by 390 million users. The “dot” reference is related to the nine-dash line China uses to demarcate its claim to most of the South China Sea.

“The biggest troublemaker in the South China Sea”

A few hours before the July 12 ruling, a Singapore-educated Chinese friend, a critic of his own government, had sent me a message on WeChat: “Is there going to be a war in the South China Sea? Why I find myself hating the US more and more? ”, referring to American intervention in the South China Sea dispute. “Enough with these clown countries,” he added. “If necessary, China should beat them, we need to be tougher.”

The US, which has navy bases in the Asia-Pacific region and is an ally of the Philippines, doesn’t officially take sides, though it has vital interests in the region as it pursues its “Asia pivot” foreign policy.

Prior to the ruling, US destroyers had been patrolling the contested waters as part of what one US official described as the US Navy’s “routine presence” in the region.

To many Chinese, naturally, the US presence in the region is not welcomed. Earlier this year, I approached a homebuyer through a real estate agent in Beijing for an interview for a housing story. After the buyer learnt I worked with a US newspaper he refused to talk. “Americans are the biggest troublemaker in the South China Sea!!” he shouted in anger.

Back in the street near the Philippines Embassy in Beijing, I noticed a middle-aged woman stop to chat with policeman. In a low voice, she asked him: “Does the US have a role in this too?”

Noticing me standing close by, the policeman turned to me. “What are you doing here?” he asked.

“Please leave,” he said. “There’s nothing much to see here.”

Owen Guo works for a US newspaper in Beijing.