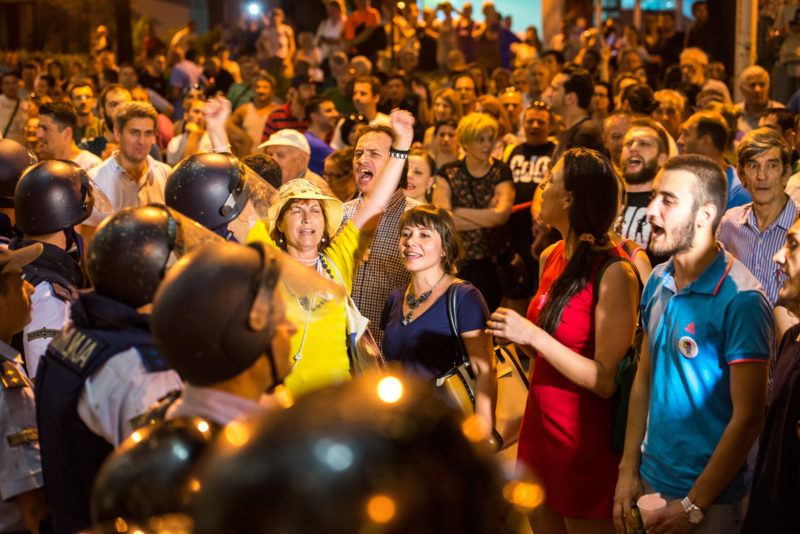 ‘Colorful revolutionaries’ singing the Macedonian national anthem to the police cordon in front of Ministry of Finance during a protest against the new Eurobond on July 11, 2016. Photo by Vančo Džambaski, CC BY-NC-SA.

Two days after Macedonians staged a massive protest in Skopje against new foreign loans, the process of issuing a controversial Eurobond has been stalled.

The Macedonian government has been trying to acquire fresh capital by issuing a Eurobond, a type of credit sold on the European banking market. According to the prime minister, the loan in the amount of 650 million euros ($724 million) is needed to ensure payment of salaries to the bloated state administration and pensions for retirees — key voting blocs that would enable the ruling parties to stay in power in the next elections.

The interest-included total cost of Macedonia's new 10-year Eurobond was estimated to be 1.1 billion euros ($1.22 billion). The government is also frequently borrowing millions of euros from domestic lenders.

On July 14, Reuters produced two news items about the Macedonia Eurobond. In the first, the agency reported that the repayment period had been lowered from 10 to seven years. This caused additional outrage, as a shortened repayment period would give the economy less time to recover enough to be able to shoulder the burden.

Compounding the problem is the fact that the deadline for repayment of other loans incurred by the current right-wing government during its 10-year rule is also approaching fast. Twitter user Parg0 noted just a portion of those debts:

The second Eurobond news broke that evening, with Reuters reporting that the issuing of the Eurobond had been “delayed” because its legality came into question. The banks in charge of selling the bond, called lead managers (Citi Bank, Deutsche Bank, Erste Bank and Societe Generale CIB), had received a letter by the opposition party SDSM, written by former Deputy Minister of Finance Kire Naumov, citing legal arguments implying future problems regarding the repayment of the loan.

Overnight, some media outlets that are critical of the government published opinion pieces and quotes by economics analysts asserting that the whole Eurobond deal was off and arguing that it is a sign that the government has lost international support.

In November 2015 during his time in office as deputy minister of finance, Kire Naumov managed to lower the amount of debt incurred by a previous Eurobond from over 500 to 270 million euros (without the int. Naumov, a member of the opposition, was placed in the post because of the Przino Agreement, a deal that was overseen by the European Union and the United States in 2015 to end political crisis in Macedonia and ensure fair elections.

According to that agreement, an opposition deputy minister had veto power in cases of new debt, forcing the government to negotiate with the opposition. But Naumov was replaced in May with a ruling party member.

The Ministry of Finance issued a statement in response to Naumov's letter claiming the Eurobond deal is “crystal clear” and that the opposition is harming the country.

At the moment of writing, it is unclear whether this is just a delay or another victory for the political opposition, the ‘Colorful Revolution’ movement against government corruption and mismanagement and the other related stakeholders. All of them claim they are trying to prevent Macedonia from sinking further into a debt spiral, similar to what happened to neighboring Greece several years ago. 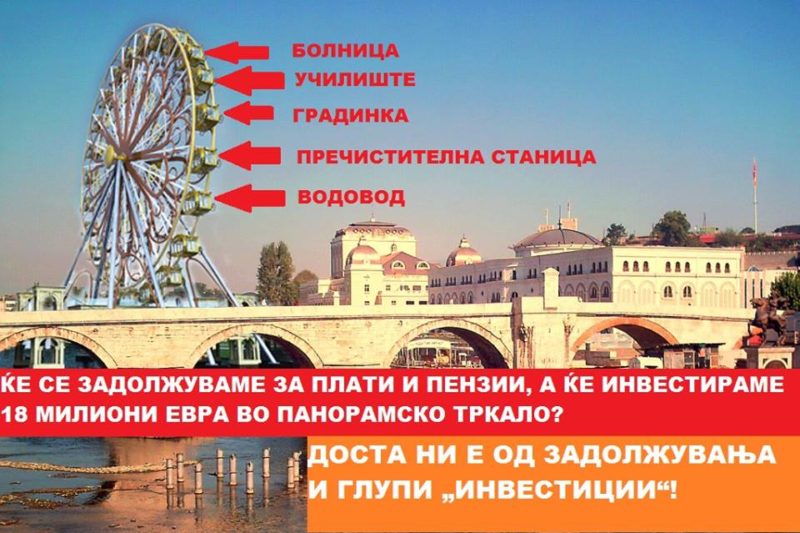