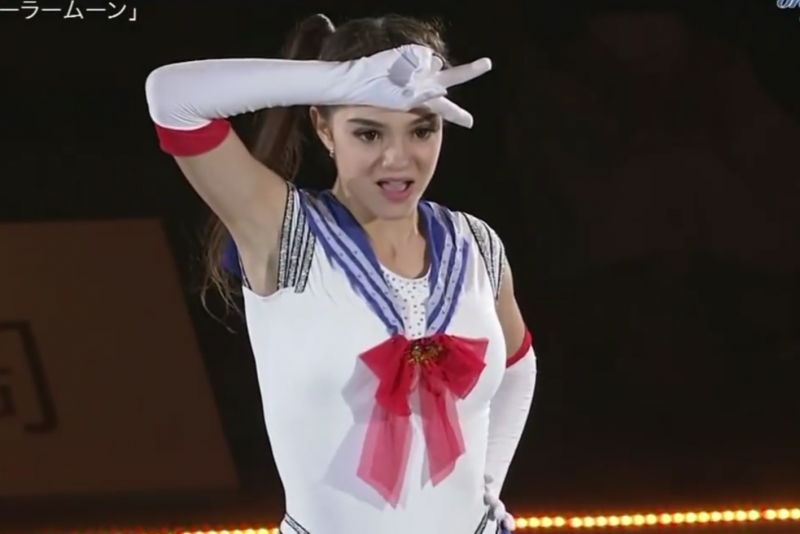 A Russian figure skating star has captured the hearts of Japanese skating fans and “otaku“ (anime and manga aficionados) alike with her performance dressed as the popular cartoon character Sailor Moon.

As reported by news site Meduza, Evgenia Medvedeva's televised performance at the 2016 “Dreams on Ice” show in Japan on July 10 quickly went viral on Twitter and other social networks.

“Chan” is a diminutive ending in Japanese used when someone or something is endearing.

Dreams on Ice is an annual figure skating exhibition held in Japan, where the sport is popular even in summer. The exhibition attracts top figure skating talent from Japan and from all over the world, and this year Medvedeva was invited to perform.

For some Japanese fans, it was like a dream come true:

Medvedeva-chan (as Sailor Moon) is just like the real thing!

(The title of the newspaper article reads, in part, “She's the queen of the ‘miracle jump.'”)

Even prior to performing as Sailor Moon in Japan, Medvedeva posted frequently on Twitter about anime. Here she tweets about the character Sebastian Michealis, from the animated series Black Butler.

Here, Medvedeva poses at an anime convention with a cosplayer (a contraction of “costume roleplay,” referring to someone who wears a costume to represent a fictional character) dressed up as the character Howl, from the 2004 animated movie Howl's Moving Castle.

Medvedeva also appeals to her Japanese fans to help bridge the cultural divide. In this tweet, she asks for help translating some fan art.

It turns out the fan art above depicts Medvedeva, on the right, quoting from Sailor Moon to nonplussed Japanese figure skating superstar Asada Mao (Medvedeva became famous in Japan after quoting the anime earlier this year to Japanese media). The fan wonders if Asada, who is unfamiliar with popular Japanese anime series Lupin the Third, would even be familiar with the more arcane details of Sailor Moon.

The subtext of the fan art is that Medvedeva loves anime, and her new Japanese fans love her for that as much as they enjoy her skating.