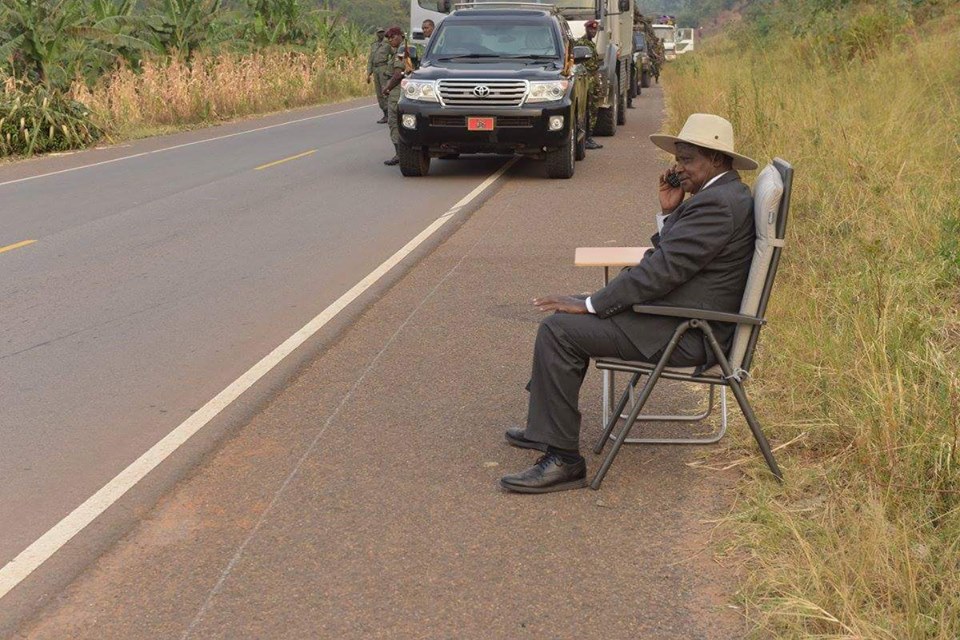 A photo posted on Facebook by Presidential Press Secretary Don Wanyama showing Ugandan President Yoweri Museveni speaking on the phone by the roadside.

Twitter has exploded with funny memes after a photo appeared online showing Uganda's President Yoweri Museveni sitting on a chair by the roadside to make a call. His motorcade, which was on the way to a public event, stopped for about 30 minutes for him to make the call.

Presidential Press Secretary Don Wanyama posted the photo on his Facebook page with the following message:

On the way from Isingiro District yesterday where he'd presided over the World Population Day celebrations, President Museveni stopped at Kyeirumba Village to make a phone call. Curious residents gathered to look at the President, who after 30 minutes on phone, briefly interacted with them. They thanked the government for tarmacking the road linking Uganda to Tanzania through Isingiro.

Some people wondered whether the photo was part of a plan to divert attention from the news of the release of main opposition politician Kizza Besigye, who was in jail for two months facing treason charges.

The hashtag #M7Challenge has been used to show images of Ugandans and other people around the world taking calls by the roadside. President Museveni is nicknamed M7 because of the sound of his name. Other Twitter users have been posting edited photos mocking the president.

It is not yet known who Museveni was speaking to or the subject of the conversation.

One Twitter user suggested that Museveni was speaking to leaders in South Sudan, where troubling violence has erupted:

#M7Challenge : It is possible M7 was having a “Let my people go” discussion with the leaders of #SouthSudan.

Museveni has ordered the Ugandan army to evacuate Ugandans living in South Sudan following recent clashes in the capital, Juba.

Rosebell Kagumire warned #M7Challenge participants not to try this stunt:

Fredrick Tumusiime shared an alleged advert for a local television station in Uganda:

Other Twitter users carried their office chairs outside to make a call:

Mathias Wandera showed Museveni taking a call on the moon:

The challenge, observed AutoblogKE, is a good tip for drivers:

haha guys who can pull the best #M7Challenge ?? i think it would be a good way to say STOP TEXTING/CALLING WHILE DRIVING

Omara Ronnie took his #M7Challenge photo at a footpath to show respect to all road users:

All are roads… showing respect to all road users. My #M7Challenge @UNRA_UG @roadsafety @KagutaMuseveni pic.twitter.com/3gd16lnFjv

iAfrikan showed the Portuguese national team celebrating their Euro2016 while Museveni is busy on the phone:

“Haters are going to say it's photoshop”

Kids were not left out:

Meanwhile, Michael Kwambo is waiting for his turn at the challenge:

Guys…please let me know when its my turn for the #M7Challenge ..let me patiently wait… pic.twitter.com/NbeoXDCH1E