Foreign Intervention in South Sudan Unlikely, Despite Calls for Action 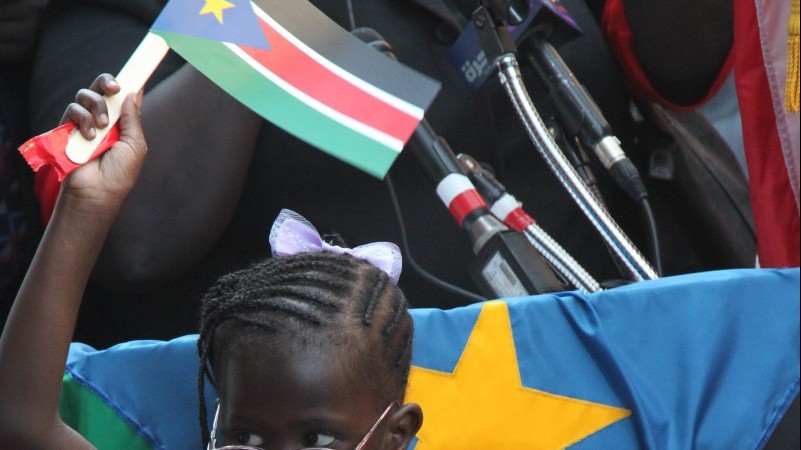 Hopes for peace and stability exhibited during an independence celebration were short lived. Public domain image / original by Jonathan Morgenstein / USAID on Flickr

With the signing of an agreement last August, the people of South Sudan were promised a resolution that would ensure peace and stability. But the dream of a unified and stable country appears to be more and more a mere dream, as clashes between the Sudanese People Liberation Army and the Sudan People's Liberation Army-In Opposition grow increasingly common and instability escalates.

In 2013, Africa's newest nation was plunged into civil war when President Kiir removed First Vice President Riek Machar on December 15, after accusing him of planning a coup. The conflict has been marred by ethnic undertones, as both leaders enjoyed the support of their respective tribes. President Salva Kiir is a Dinka, while Riek Machar is an ethnic Nuer. (Dinka is the largest ethnic group in South Sudan, and the Nuer tribe is the second.)

In February 2016, Kiir re-appointed Machar as his first vice president. By July 7, however, fighting erupted in the capital city, Juba, where forces loyal to Kiir fought with troops pledged to Machar. The clashes marked the first violence since the signing of last year's peace deal, and reportedly left hundreds of people dead.

Many now fear that this violence is the harbinger of another devastating civil war.

As South Sudan's government fails to end the fighting, many in the country are looking to the international community for intervention. Reports from the United Nations, non-governmental organizations, and various human rights groups detail numerous war crimes committed by both troops on both sides of the conflict. Troops on both sides also stand accused of carrying out acts of mass rape, forced cannibalism, and the use of child soldiers.

Since the violence started in 2013, more than 2 million civilians have been displaced and a reported 4.6 million are on the brink of starvation. The economy, which relies heavily on the export of oil, has suffered enormously, as a result of oil prices falling worldwide. Just last week, the latest violence is believed to have displaced thousands more people.

With the country on the brink of a new disaster, many people have taken to Twitter, asking the International Criminal Court (ICC) to intervene on behalf of the South Sudanese people.

#Juba we cant have this madness all the time about #SouthSudan.They need to fix their leadership. Where is @ICC ?

It's an ignominy that Africa's youngest nation is back to war. Maybe the Big Brother and ICC needs to swing in to bring peace.#SouthSudan

Some leaders, including Uganda's Yoweri Museveni and Kenya's Uhuru Kenyatta, have been calling on African countries to withdraw from the ICC. Twitter user Meshack Omega, on the other hand, argued that now is not the time to disengage, saying South Sudan is evidence that Africa countries must remain members of the ICC:

In February, members of the African Union (AU) backed a Kenyan proposal to withdraw from the ICC, complaining that it unfairly targets African leaders.

During his inauguration ceremony in May, Ugandan President Yoweri Museveni said he no longer supports the ICC, calling it “a bunch of useless people.” US, Canadian, and European delegates walked out of the ceremony, following these remarks. Sudanese President Omar al-Bashir, who has been indicted for genocide and crimes against humanity, also attended the ceremony in Uganda.

The Ugandan journalist Joseph Burite hopes there will be a new indictment by August:

The warlords of SS have extended their deliberate killings to foreigners. I see ICC indictments by end of August. #SouthSudan

South Sudan has put a very strong case on why Africa needs the ICC. AU was mandated to establish a hybrid court but has been complacent

Sad but true: #AfricanUnion working on recommendations to threaten “withdraw” from #ICC but *utterly & *completely silent on #SouthSudan.

Both South Sudan's president and its vice president should face the law, tweeted African Women:

South Sudan leadership of Kiir and Machar are Africa's most wanted war criminals. Over to you ICC pic.twitter.com/em4xn2SKuY

Josh Kariuki, however, thought of a hybrid court solution:

@WafulaCharles @CyrusKublai my silver lining is Hassan Habre's trial.
Also looking forward to Hybrid Court of #SouthSudan
I gave up on #ICC

Kariuki's observation refers to the trial at the Extraordinary African Chambers, a special hybrid criminal court in Senegal that was set up to try former Chadian President Hissène Habré. The court found him guilty of war crimes and crimes against humanity and sentenced him to life imprisonment. It was the first time one country prosecuted another country’s former leader for war crimes.

The ICC's ability to intervene in South Sudan is limited, however, due to South Sudan's refusal to sign to the Rome Statute (a requirement for the court to have any authority over a sovereign nation). Another alternative would be a resolution by the UN Security Council drafted to permit the ICC to hold an inquiry and thus investigate any possible war crimes.

In an opinion piece reportedly penned by both Kiir and Machar for the New York Times, they argued against the need for a trial, advocating instead for a “truth-telling exercise” that focuses on reconciliation, rather than persecution. Machar's aide has since claimed that Machar did not author the text.

Without the cooperation of the South Sudanese government, in any event, it will be difficult for the ICC to play any role in South Sudan, despite what many Twitter users say the country needs.