‘Our Strength as Women Lies in the Differences Among Us': The Central American Feminist Symposium 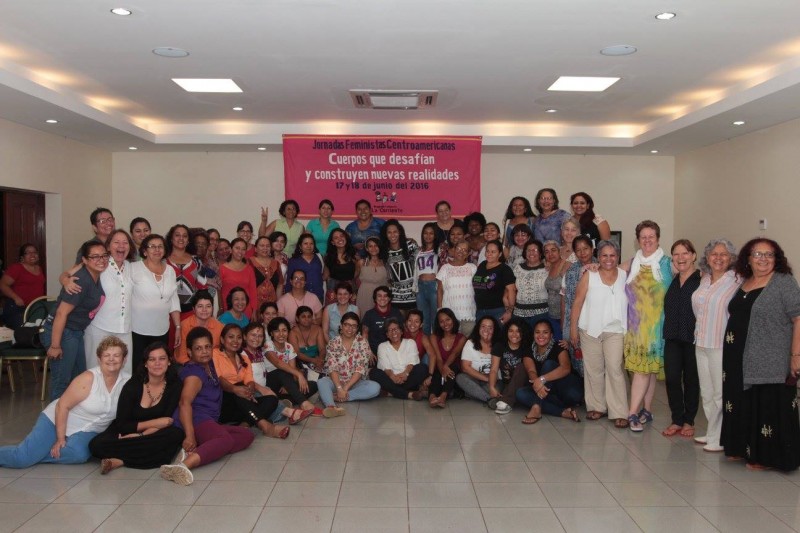 “Bodies that defy and construct new realities.” Participants from the 2016 Central American Feminist Symposium. Photograph by the author, used with permission.

More than 80 activists from Panama, Costa Rica, Nicaragua, El Salvador, Honduras and Guatemala came together under the theme “Bodies that defy and construct new realities” at the Central American Feminist Symposium, which took place in mid-June in Nicaragua's capital city Managua.

The event was an opportunity for conversations about women's rights from a regional perspective and across generations. The Nicaraguan feminist group Programa Feminista La Corriente was the main organizer behind the symposium.

The debates, which were echoed on Facebook and Twitter, centered on how to frame the tough reality facing women in Central America and how to improve the activism trying to change it. With a heavy heart, participants explained that the number of murdered women continues to be alarming and, after many years of activism, it is important to remain united. They also pointed to the revival of religious fundamentalism, which promotes restrictions on women's freedom:

‪#‎JornadasFeministasCA2016‬ “It seems like Central American countries aren't ruled by the constitution, they are ruled by the Bible.”

Activists also spoke about the reversal of some women's rights, including a ban on therapeutic abortion and the rising rates of teen pregnancy caused by a lack of sexual and reproductive education. The situation is made worse by an increase in gender violence on social media and growing male chauvinism among young men who act with impunity:

Violence in Central America is a pandemic and exists as harassment in the street all the way to murder. #JornadasFeministasCA2016

Esperanza White, a feminist activist from the Caribbean coast of Nicaragua, emphasized on Facebook the importance of uniting the many different elements of the feminist movement as well as taking an intersectional approach to feminism in the region:

I'm moved and rejoiced by this thought: “Our strength as women lies in the differences among us…Lesbians, indigenous, disabled, Afro-descendants, trans, heterosexual…different bodies with the same soul and the same problems”…  ‪#‎JornadasFeministasCA2016 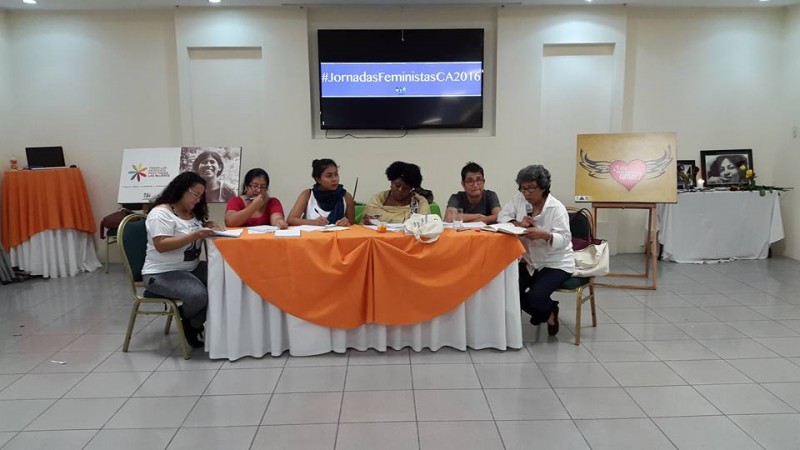 Feminist activists from all over Central America in a plenary meeting. Photograph by the author. Used with permission.

At the symposium, Hondurans described the feeling of hopelessness that they are grappling with. Despite decades of struggle, long-lasting structural change has remained largely out of reach thanks to the lack of government support and a shortage of resources needed to support activism.

For this reason, the group emphasized the importance of developing strategies to deal with the emotional burden and psychological wear caused by this long-term battle. To this end, the activists recommend “self-care” (understood as emotional and social self-care) as an indispensable instrument to keep them afloat:

“Self-care has to be a part of the political sustainability of the movement.”  #JornadasFeministasCA2016

The women from the movement concluded that generational differences must be overcome by creating new spaces for dialogue; the young can learn from the veterans and the older players can be influenced by the energy and fresh ideas of the newcomers. In addition, there is a need to document the movement, which has a rich history of work on the ground:

We need to take stock of the situation over the past 30 years…We're discussing today different tensions, like the ones created by generational differences as we did 30 years ago, but in new contexts…This is the moment when we should try to see what are the possible solutions to the situation that we are facing today, with the new players at hand. We have to work to manage feminist knowledge…to spread, socialize and share history. Patriarchy is huge, violent, predatory because we've done little to dismantle patriarchal myths. #‎JornadasFeministasCA2016

What can I say? Happy with the ‪#‎JornadasFeministasCA2016 my struggle is filled with energy from all of these marvelous and invigorating women, my commitment has new strength, today more than ever I'm grateful to the universe for leading me to feminism #‎AquiSeRespiraLucha [Here We Breathe the Struggle] [On the image: “hanging with feminists is learning to struggle”]

After the gathering, activists from the main organizer, Programa Feminista La Corriente, said they were optimistic, concluding that there is a lot of work to be done but the renewed energy from these days of intense debate made the struggle a lot less burdensome. For them, it's clear: maintaining links inside the movement will be decisive if they are to see changes in the future.