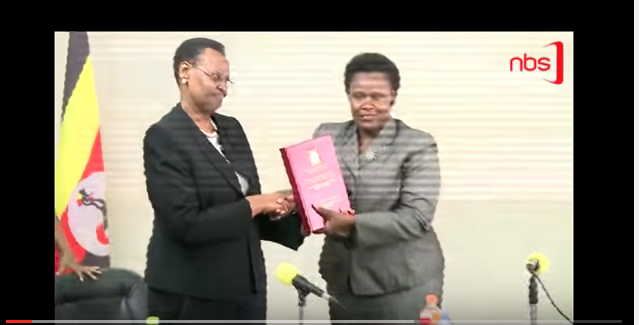 A screenshot of a YouTube video showing Janet Museveni (left) taking over the mantle of Ministry of Education and Sports.

Uganda's longest serving president Yoweri Museveni's fifth term in office got off to a controversial start after he unexpectedly appointed female opposition politicians (and his wife) to ministerial positions under his new government.

The appointed politicians include Beti Kamya, who was one of the most outspoken opposition leaders in the country as the president of Uganda Federal Alliance. She was appointed as minister in charge of Kampala, the capital city.

Radio France International quoted Uganda People's Congress opposition party leader Olara Otunnu stating that the politicians who have been given ministerial positions had been secretly working with the president for a very long time to destabilise the opposition:

What he's trying to do is rent support from compliant members of the opposition, for instance the Uganda People's Congress’ (…) Betty Amongi [has] been working with Museveni for several years to destabilize and undermine the UPC from within, [she's] now been rewarded by being given a cabinet position.

In a video report by NTV Uganda, academic Gerald Karyejja said that President Museveni brought in Betty Kaya and Nakiwala Kiyingi to calm down Kampala, where numerous protests against the president and his party have taken place and where his party has lost political ground.

Bernard Sabiiti a political analyst, meanwhile thinks the moves are intended to break up the opposition at a time when opposition leader Kizza Besigye is facing treason charges.

Another controversial Museveni decision was the one to make his wife Janet Kataha Museveni Minister of Education and Sports, which is considered one of the most important ministries.

Many have questioned the suitability of Janet Kataha — constantly surrounded like other members of the ruling family by masses of security — for the role.

This led Gofrey Mutegeki to joke that the day Janet Museveni took up office in the ministry should have been proclaimed a public holiday:

Janet Museveni things….roads closed… Hmmm, they should have made today a public holiday….

Commenting on the appointment of the First Lady, ‘Kicking Lizard’, a reader of the Daily Monitor website, felt Janet Museveni would be unable to raise the standard of education in the country:

Just watch out for the total collapse of education in Uganda. This woman has no morals and the indicative of it is when she publicly said she was going to use state house recourse for her security. Now you can see how” accessible” she will be. She has been one of the strong voices in perpetuating her husbands dicatorship. Education has one of the highest budgets and just watch out for another Muhwezi-like robbery.

Suggesting that president Museveni appointed opposition politicians to bring them closer to him, Eshban Kwesiga tweeted:

Wilfred Busige pointed out President Museveni appoints ministers to either reward or silence them:

Museveni selects his ministers on 2 accounts; Either to reward or silence/tame individuals. For Betty Kamya, I think it's the former.

Early this year, Museveni appointed his son Muhoozi Kainerugaba to Major General, one of the highest military ranks in the country.