Dozens Killed After Indian Forces Crackdown on Protests in Kashmir 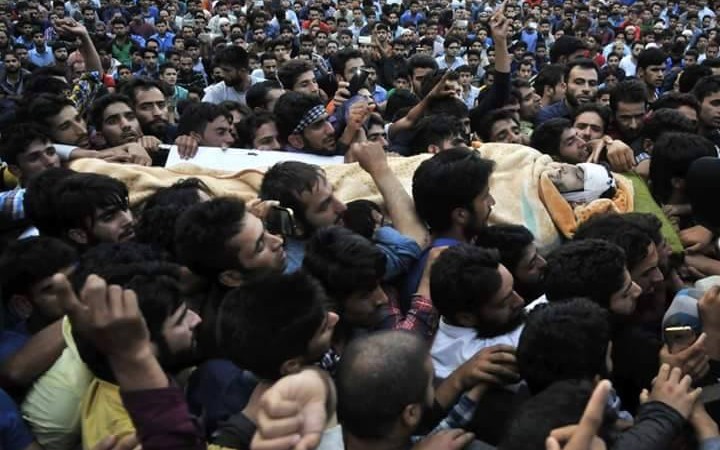 Protests against the killing of Burhan Muzaffar Wani, the commander of Kashmiri separatist group Hizbul Mujahideen, turned violent in Indian-administered Kashmir in the north of the country when Indian forces opened fire on thousands of demonstrators who defied a curfew on Sunday, July 10. A total of 31 have been killed, with about 444 people injured.

This is the disputed region’s worst outbreak of civilian unrest since 2010, when more than 100 people died in anti-India protests, which were triggered after police shot dead a teenager.

Known as “the poster boy” of Kashmir’s new wave of armed struggle, 22-year-old Wani used social media platforms to rally supporters for an ‘Azaad’ (free) Kashmir. Unlike former rebel leaders, he never covered his face in his viral videos. He was killed extrajudicially on Friday by Indian military forces. His killing is viewed by many Kashmir citizens as an attempt by the Indian government to silence the resistance movement. There was a bounty of 1 million Indian rupees on Wani's head.

This led to protests with slogans like ‘Azaadi’ (freedom) and ‘India go back’. Independence supporters in Kashmir defied the curfew and took to the streets, chanting slogans for Wani and demanding that India give up control of the region.

Muslim-majority Kashmir is geographically divided between India and Pakistan and claimed in entirety by both. Twelve million live in the Indian portion of Kashmir. Separatist politicians, rebels, and alliances like the All Parties Hurriyat Conference reject India’s sovereignty over Kashmir and have been fighting for independence or a merger with Pakistan since 1989. More than 68,000 people have been killed in sporadic uprisings and subsequent Indian military crackdown since then.

Security forces fired bullet and pellet guns at the demonstrations, leaving about 40 people with a very high risk of permanently losing their eyesight.

A local hospital in Kashmir received more than 400 injured. There have been reports of security forces teargassing a hospital, even as patients and doctors were inside, leading to deaths.

The Jammu & Kashmir Coalition for Civil Society accused authorities of trying to cover up their violence:

The government of India and Jammu and Kashmir lack the will to institute a crowd control policy, which can ensure no or minimized civilian casualties. On the one hand armed forces are preventing the injured to be ferried to hospitals, at the same time senior police officials without any credible investigations have begun to accuse the dead and the injured for their own bloodshed.

After Wani's killing, a curfew was imposed, bringing life in the valley state to a standstill. Mobile telephone networks have been suspended in the four districts of south Kashmir since Friday evening, when protests first sprang up. Even train services have come to a standstill.

Internet has been banned. Curfew has been imposed. Phones can't be reached. The mighty Indian state might have killed him but they haven't won. A 21 year old in his death has shaken you.

Wani had gained prominence as the face of separatist sentiment in Kashmir valley, the epicenter of an independence movement that has waned since its peak in 1990s. The conflict remains active, however, and state forces and Kashmiris are at odds over the people's right to hold a referendum on independence.

“The hearts & minds of the people in Kashmir are not with India & that is a fact.” https://t.co/FYr31nCTyz

The conflict has lasted nearly six decades, with both India and Pakistan claiming the territory of Kashmir. Reports from the conflict zones of Kashmir point to widespread human rights abuses committed by the Indian state as it has tried to contain the insurgency.

The Indian state forces like the police and paramilitary can act with impunity, killing and raping citizens without fear of punitive measures, thanks partly to a law named the Armed Forces Special Powers Act (AFSPA), operational in India-controlled Kashmir and the country's northeastern states. This has resulted in a vicious cycle of killings and protests in Kashmir over the years.

Human rights activists have been vocal with their demands for AFSPA to be repealed and for an end to the impunity with which India's state forces operate. The discovery of mass graves containing the remains of the disappeared has also received widespread attention. The Supreme Court of India has recently remarked that the impunity for the armed forces should end.

‘And we insist that Kashmir is a part of us. Bull shit’

Meanwhile, some lashed out on social media, accusing protesters and their supporters of sympathizing with the “terrorists”. “How can any Indian have sympathy for such people?” asked India's Union Minister Venkaiah Naidu.

Was #Burhan not a terrorist? Shouldn't he be treated like a terrorist? Why do u hv sympathy for a killer? Qs for white collared terrorists..

For journalists in Delhi shedding tears for terrorist Burhan Wani, being an apologist for Islamist terror, just one thing. You are a coward!

But others like Sudipto Mondal warned that the media wasn't accurately reporting the situation, which favors the government. On Facebook, he sarcastically questioned social media users who said all the protesters — which according to some reports are in the hundreds of thousands — are all sponsored or paid for.

If Indians are so concerned about their armymen dying in #Kashmir, please take them away. Its not like we are especially fond of them.

Some are questioning India's Prime Minister Narendra Modi and the government's silence:

18 civilians lose their life in #Kashmir and PM saheb continues to be in vacation mode. And we insist that Kashmir is a part of us.Bull shit

Are the government's policies regarding Kashmir winning? Hurriyat leader Mirwaiz Farooq opined that Burhan's killing would inspire other Kashmiri youths as he was a symbol of resistance to them. If the Indian state forces do not end the violence, it will have to face “more Burhan Wanis”.