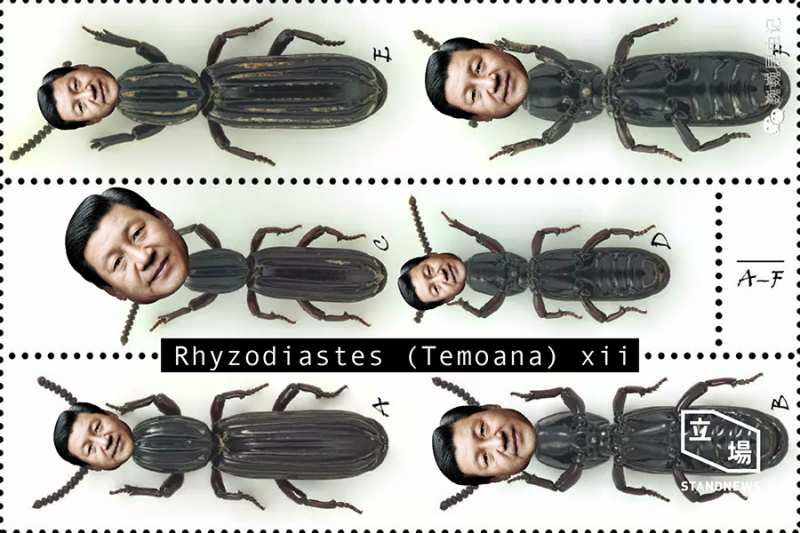 A Chinese scientist recently published an article on Zootaxa, a peer-reviewed scientific journal for animal taxonomists, about the discovery of a new beetle species from Hainan Island called Rhyzodiastes (Temoana) xii. While the “xii” part of the name might just look like Roman numerals, it's actually a reference to Chinese President Xi Jinping.

The scientist, Wang Cheng Bin, who is currently a postdoctoral fellow in the department of ecology at the Czech University of Life Sciences, wrote in his article (via China Digital Times):

The specific epithet is dedicated to Dr. Xi Jin-Ping, the President of the People’s Republic of China, for his leadership making our motherland stronger and stronger

It is not uncommon for scientists to pay homage to state leaders in their naming of new species, such as Aptostichus barackobamai, a species of trapdoor spider named after the 44th president of the United States, and Mandelia mirocornata, a sea slug named after Nelson Mandela, the former president of South Africa.

But the naming of this new bug after Xi has been deemed a “sensitive” issue in China, and the Chinese translation of the name (習氏狼條脊甲) has been banned from search on social media site Weibo. The search notice from Weibo states:

According to related law and policy, the search result of “Rhyzodiastes (Temoana) xii” cannot be shown.

The word “bug” has a negative connotation in Chinese culture. Furthermore, the scientific description of Rhyzodiastes (Temoana) xii says it resides underneath rotten trees and eats rotten things, imagery associated with corruption in Chinese literature.

The ban on the term quickly became a running joke online. A Weibo user sarcastically praised the effectiveness of web censors:

The sensitive nature of the name is perhaps best captured in a poem titled after Franz Kafka's The Metamorphosis and circulated on social media. It was written by Zhang LIfan, a well-known writer and historian: