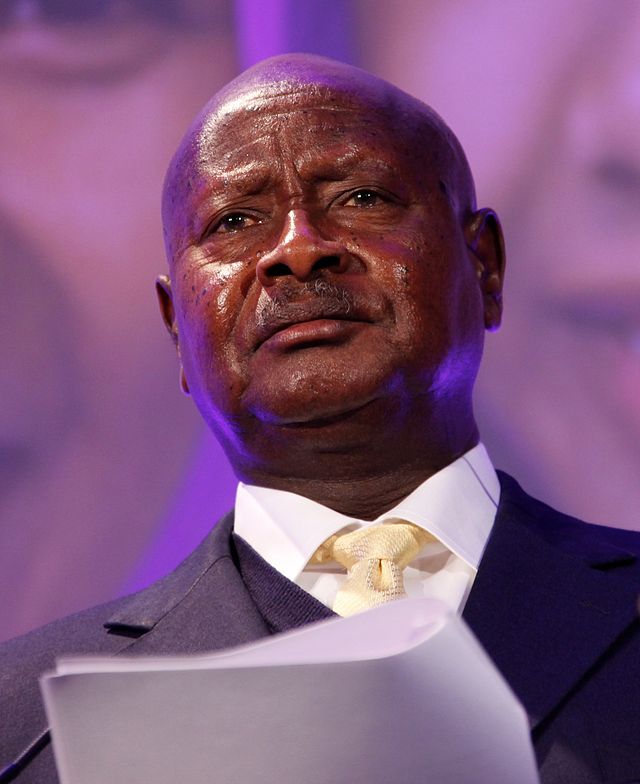 Uganda's president Yoweri Museveni is looking to extend his stay in power since he took over in 1986. Photo released under Creative Commons by Russell Watkins/Department for International Development UK).

Uganda's President Museveni now has a perfect excuse to run for office come 2021 and extend his rule to 40 years, thanks to Anne Maria Nakabirwa, the Kyankwanzi district National Resistance Movement party chairperson.

She was quoted saying that people in her district were asking her to persuade fellow legislators to push for the removal of age limits for presidential candidates in Uganda to allow capable leaders such as president Museveni to continue serving.

She says she would petition top party officials to remove the age limit for Museveni to stand again.

Not many Ugandans are shocked by the news because such bizarre proposals no longer surprise anyone anymore.

The proposal to amend the constitution is seen as an attempt to make Museveni a president-for-life.

Upset by the plan, Jackie Assiimwe Mwesigye, a Ugandan lawyer, asked her Facebook friends to resist the scheme:

MPs, while meeting in Kyankwanzi, have resolved to push for lifting of the age limit for the Presidency in the Constitution.
We must resist this evil scheme. It does not help anyone, not Uganda, and not even the person for whom it is intended. Let's not fall into this trap.

Whose rules are these anyway?

The constitution currently bars anyone above 75-years-old from standing for president.

Museveni, who is now 71, would thus not be able to seek re-election in the next presidential election in 2021 unless the constitution is amended.

Any amendments would face little resistance in parliament where the ruling National Resistance Movement has a solid majority.

Museveni has been in power for 30 years, and is currently serving his fifth term in office since 1996 when he won his first elected term. There were no established presidential term-limits from 1986 to 1996.

Seventy percent of Ugandans are under the age of 29 and have thus only known one president during their lives.

In 2005, Ugandan MPs amended the constitution to remove the presidential term-limit.

Former prime minister and 2016 presidential candidate Amama Mbabazi has since expressed regret over his one-time support for the removal of presidential term-limit.

Reacting to the news about the potential age-limit amendment, Twitter user Bireete Sarah made a subtle reference to allegations that MPs had been paid off in order to vote to remove term limits back in 2005:

I will stand in 2021 – M7! Age limit will be sorted by Pay as You Go Parliament!!! There we we folks #Stuck pic.twitter.com/MVzEn7f2vo

In 2014, a local daily newspaper reported that there were a number of requests from individuals and civil society organisations asking the Uganda Law Reform Commission to amend the constitution to remove the presidential age limit.

During his visit to Germany in June, German newspaper Spiegel asked Museveni, “If you want to run for election again, the constitution will need to be changed to extend the age limit for presidents to 75 years. Will that happen?”

Sarah Bireete, another lawyer from the country, is hoping that the young generation will stop the plan to remove the age limit:

78% of our population are young people 0-30yrs. Can they be that great generation that will stop lifting of agelimit pic.twitter.com/6ARHPqt0Pa

A Twitter user using the name ‘She Wolf’ joked the country should “lift the death limit” instead:

MPs proposing lifting of presidential age limit r enemies of progress. Why not lift death limit so their ruler can live forever?

Alexi Omondi meanwhile bemoaned the fact the country was following a pattern recognised across the continent:

Claire Ahabwe was not surprised:

@RugyendoQuotes its no surprise to me. However they should be reminded that even the best dancer leaves the stage

Kiyingi Elly was less-light-hearted about the development, suggesting a national sadness day if the constitution is ultimately amended: