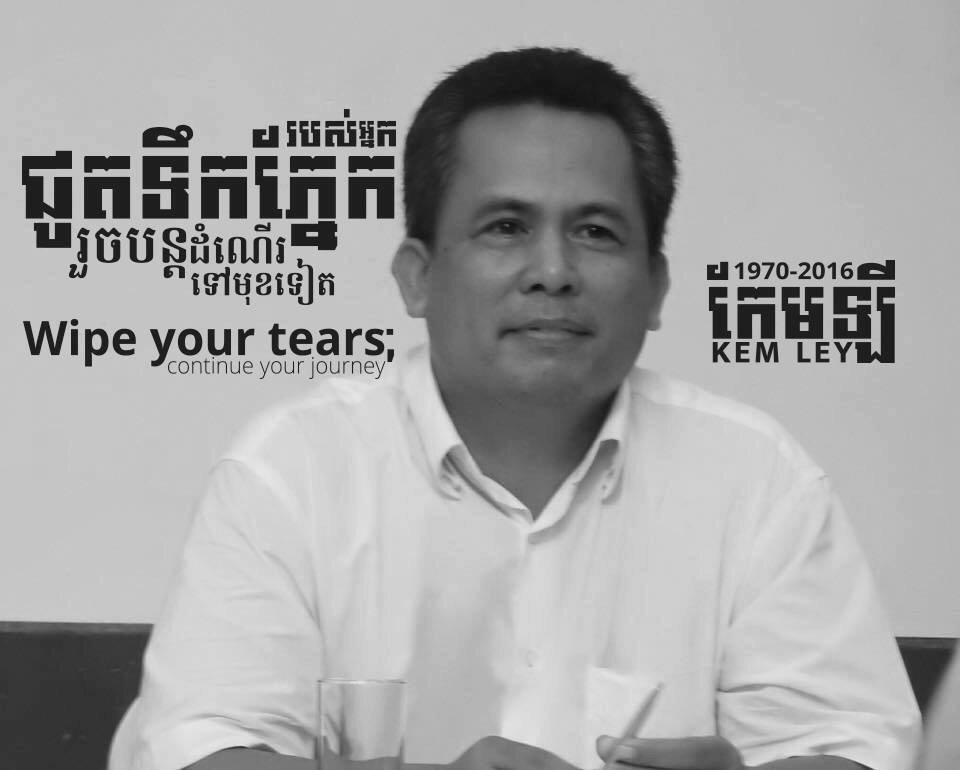 This image of Kem Ley was widely shared by Twitter users. Source: ‏@RPanh

A prominent political analyst and government critic was shot dead inside the store of a gas station in Cambodia on July 10. Hundreds of Cambodians spontaneously gathered near the crime scene and marched in Phnom Penh, the country’s capital, to condemn the killing.

Kem Ley, leader of the Grassroots Democracy Party, is a popular commentator and researcher known for his hard-hitting stance against the government of Prime Minister Hun Sen.

Hun Sen has been in power for more than three decades.

The killing of Kem Ley took place a few days after an independent investigative report was published exposing the questionable business transactions of Hun Sen’s family.

The gunman who shot Kem Ley was quickly arrested by police.

The suspect confessed his crime in a video and claimed that he killed Kem Ley because the latter owed him some money.

Many Cambodians refuse to believe this since they think Kem Ley's murder could be related to the worsening political climate in the country wherein several leading members of the political opposition and scores of activists have been charged, arrested, and intimidated by authorities in recent weeks.

Below are some of the scenes in Phnom Penh a few hours after the killing of Kem Ley:

#Cambodia: a large crowd has gathered at scene where political analyst Kem Ley was shot and killed this morning pic.twitter.com/ciT96nLjhE

Angry mourners are gathering near where Kem Ley was killed this morning, covering his car with flowers and incense. pic.twitter.com/sgunoGKoO1

A growing crowd has gathered outside the convenience store where Kem Ley was shot this morning. #cambodia pic.twitter.com/qZbekqKmpS

One man shaved his hairs bc of an analyst Kem Ley died pic.twitter.com/0Hv9IEhCPT

The march which accompanied the transportation of Kem Ley’s corpse attracted a large crowd in Phnom Penh:

Many hundreds in the streets at Russian Federation and Monivong, protesting killing of #KemLey #Cambodia pic.twitter.com/0ntj7BW9Cs

The parade of body of Kem Ley, political analysis who were shot dead this morning #KemLey pic.twitter.com/bXw0cqQ0qV

Writer Kounila echoes the sentiment of many Internet users:

I don't buy the current joke that #KemLey was murdered due2 debt. Cambodians've seen what he posted on FB, & clearly know what happened. RIP

Kem Ley’s last radio interview could give some clue about his death:

Kem Ley on radio last week: “When regime wanted to kill, labels them [conspirators] not loyal to the regime. Then they kill them.’ #Cambodia

The United States Embassy joined Cambodians in mourning the death of Kem Ley:

Shocking & sad news: the murder of #KemLey, one of #Cambodia‘s most prominent political analysts. Our deepest condolences go to his family.

Even Prime Minister Hun Sen has denounced the killing and has ordered the police to solve the case and impose stricter gun controls.

There are reports that a bigger funeral is being readied in the next few days. The hashtag #KemLey can be used to track news related to the killing.