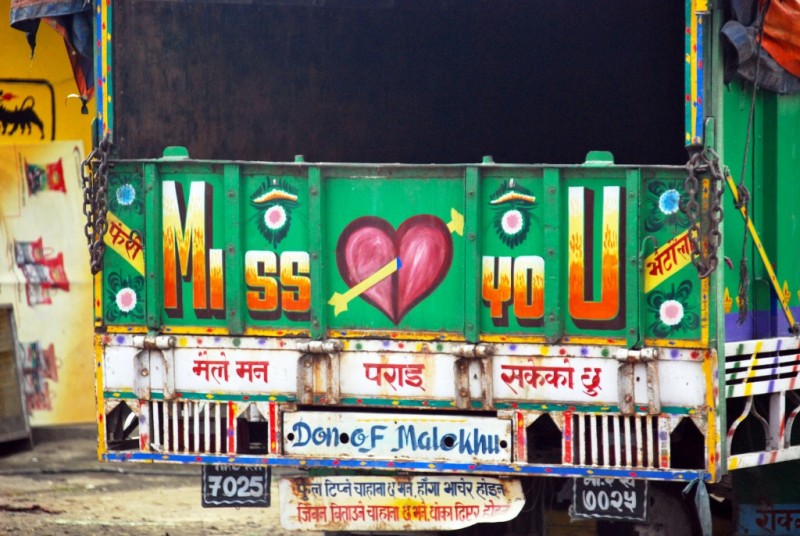 This truck carries the message: If you want to pluck a flower, don’t lop off the branch; if you want to lead a life, don’t deceive [anyone]. Image by Flickr user Jana Reifegerste. CC BY-SA 2.0

Next time you're in Nepal, you might notice something special about the trucks plying the country's roads. Like in Pakistan, Nepalese trucks carry quirky, witty verses and contextual satire.

The messages range from politics and philosophy to love, humour and even expletives. These days, they aren't limited to trucks, but show up on public buses and safa tempos (battery-powered tuk-tuk) too.

There are a few initiatives in Nepal to compile these expressions. According to columnist CP Aryal, a magazine called Bus Sahitya, meaning “bus literature,” was launched several years ago in a move to acknowledge the literary value of the verses splashed on the back of vehicles. And Subid Guragain, a journalist and teacher, published a compilation of 700 such messages titled Truck Sahitya, meaning “truck literature,” in 2011. Aryal writes:

What drives people to scrawl these lines on their vehicles? And why do so many do it? Govinda Lamsal, who drives a truck, says that in a line of work that is so mechanical, these words or images are a way of showing some creative flair and personal philosophy. “People perceive us as hardened folk without emotions,” he says. “Well, we have feelings too, and this is usually our only means of showing them while on the road.”

Social media is full of examples of these verses. This truck carries a message mentioning Facebook and Twitter:

If you can’t have Facebook, go for Twitter;
If you can’t win a girl, make her [your] sister.

Many of the messages are lovelorn and cannot stop talking about sisters-in-law:

And they don’t spare the country’s politics and politicians:

In America, young lead the country;
Old get the pension.
In Nepal, old rule the country;
Young get the tension.

Some messages have philosophical overtones: 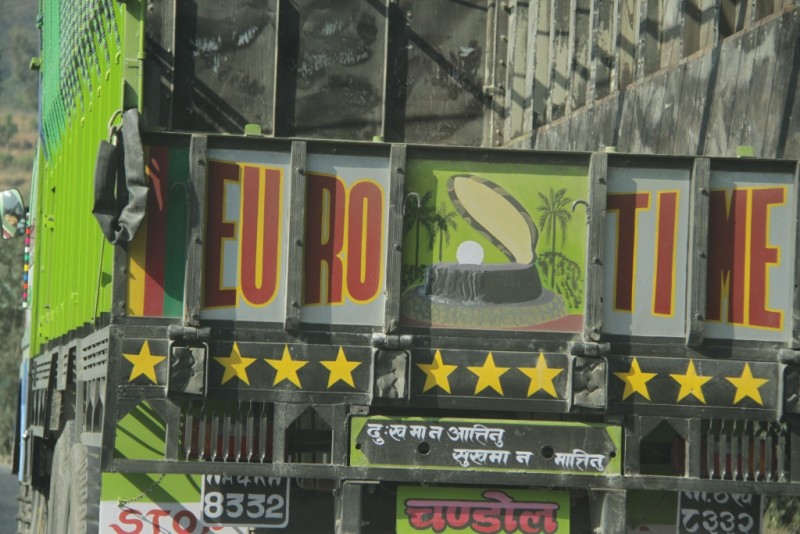 This truck is conveying the message: Don’t lose your cool in sorrow; don’t cross your limit in happiness. Image by Prabin Gurung. Used with permission.

This one is similar:

Other messages talk about a driver’s life and the difficulties they face:

A baby’s food, biscuit and cake;
A driver’s life, steering and brake.

Some messages are satirical, like this one aimed at those who cannot stop talking about Nepal being the birthplace of Buddha:

Surrounding are hills, in the middle is a lake;
There is dearth of wisdom in the country where Buddha was born.

And here's a message for anyone who is impatient:

Please don’t blow the horn,
My country is sleeping.

If you are contemplating a long drive on a Nepalese highway, these short messages are sure to break the monotony of your journey and bring a smile to your lips.

A previous version of this story incorrectly implied that Pakistani trucks do not carry messages painted on them as well.