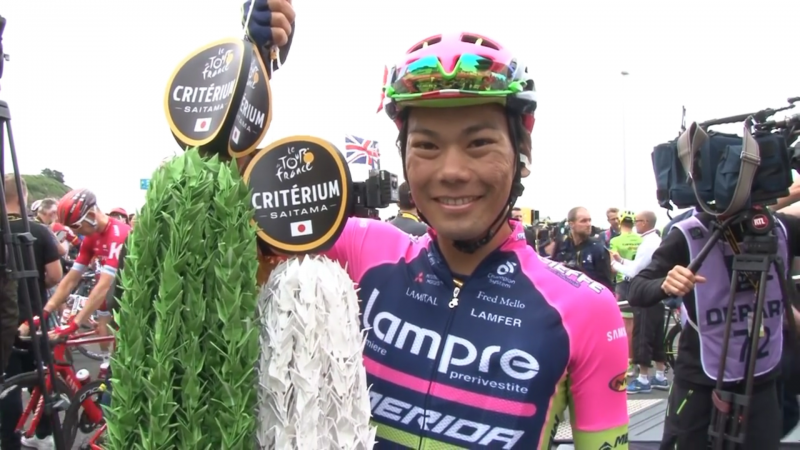 While Mark Cavendish won the stage outright on Thursday, July 7, Japanese cyclist Arashiro Yukiya received a “combativity award”, the prize for most aggressive rider in the sixth stage of the Tour de France.

Arashiro won the award for going on a breakaway and staying ahead of the pack for 137 kilometers of the 190.5-kilometer, mostly flat stage traveling from Arpajon-sur-Cère to Montauban in southern France. Afterward, the hashtag #敢闘賞 (combativity award) trended on Japanese Twitter. Arashiro received lots of support from cycling fans back in Japan:

Everyone's going to be so stoked after Yukiya snags the “combativity award.”

Arashiro prize as the most combative rider of the day means he will have the honor of wearing the special red jersey in Friday's stage, concluding in the high Pyrenees.

Arashiro is racing in his sixth Tour de France. In 2009, he became the first Japanese rider to complete the Tour when he crossed the finish line on the Champs-Elysees ahead of fellow Japanese cycling superstar Beppu Fumiyuki.

In 2012, Arashiro won his first competivity award in the Tour de France on the fourth stage.

Riding for Lampre-Merida, Arashiro recently put in a strong showing at the Tour of Japan in June 2016.

Arashiro has been a long-time crowd favourite, not only because of his sunny disposition and the fact that he lives in France and speaks French, but also because his pet dog travels with him as part of the Lampre-Merida entourage.

The third stage of the Tour de France takes cyclist Arashiro Yukiya to Angers, just an hour by car from where he lives. — French Tourism Authority (in Japanese)

Following Arashiro's red jersey win, there are high hopes that this year will be the year a Japanese-born cyclist wins the Tour de France.

Today Arashiro Yukiya wins the red jersey. Will he win the next stage?