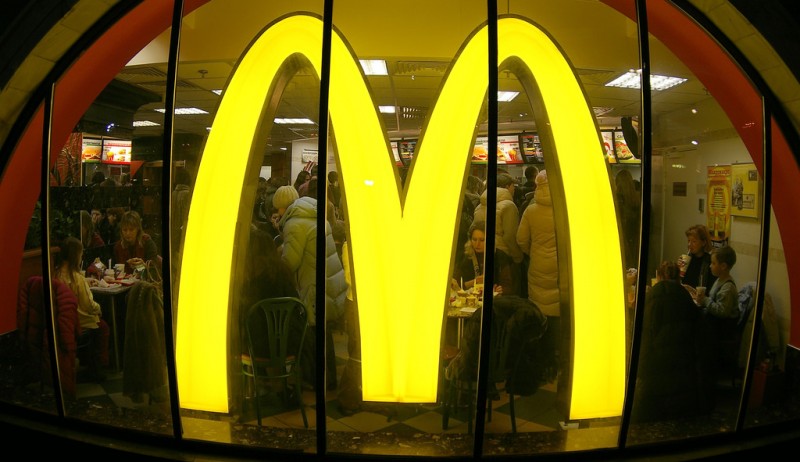 About 25 years ago, the chance to buy a burger and fries wrapped in translucent paper, decorated with a golden “M,” was a luxurious treat in Moscow. On January 1, 1990, roughly 30,000 Muscovites famously lined up outside the Soviet Union's first-ever McDonald's restaurant, located in Moscow's prestigious Pushkin Square.

While the world's biggest fast-food chain might no longer thrill the denizens of modern-day Moscow, McDonald's is still breaking new ground elsewhere in Russia, and causing public frenzies that resemble its memorable arrival in the USSR. Last month, the chain opened its doors for the first time in the city of Barnaul, which is home to 600,000 people in southern Siberia. Large crowds of people—mainly teenagers—waited in line for hours before the restaurant even opened.

On Russian social media, many Internet users wondered—perhaps as a joke, or maybe out of genuine concern—that the craze in Barnaul over McDonald's signaled a “return of the 1990s.”

The 1990s are back. Those who wanted a recap, rejoice #Barnaul #McDonalds

Others joked that the criticisms of McDonald's and the folks waiting in line were just sour grapes from people who arrived too late get a good spot in line.

And then Barnaul divided in two camps: those who joke about McDonald's on social networks, and those who stand in line at the grand opening

Given McDonald's status as an icon of American industry, some Twitter users were happy to get a little political, adapting the “KrymNash” (“Crimea Is Ours”) meme to the American restaurant chain's arrival in southern Siberia:

The fucking Americans have occupied Barnaul and rounded up its people at gunpoint, making them stand in lines outside McDonald's! Barnaul Is Ours!

The news media has struggled to explain Barnaul's apparently massive interest in McDonald's, which Russians in Moscow are accustomed to thinking of as “yesterday's news,” having had their first taste of the food chain back in 1990. The news website the Village [9] even interviewed social science researchers and psychologists, who reasoned that McDonald's today—with its appealing “Western vibe”—is trendy within the country's youth culture. According to these experts, McDonald's in Russia's regions currently enjoys the “coolness” factor that chains like Starbucks have managed to harness in the gentrified areas of many European cities. (Starbucks, incidentally, has yet to arrive in Siberia.)

Young people in Barnaul have undoubtedly been conspicuous about their consumption of McDonald's food and brand, adding banal, life-affirming hashtags to their Instagram photos from the restaurant that are straight out of the company's own viral marketing, writing (in Russian) things like #summer, #city, #imlovinit, #lovelyday, #summermood, #happiness, #selfie, and #smile.

This day will go down in history as I have tried McDonald’s food! #McDonalds #Arina #summer #Barnaul

Many young women dining at the Barnaul McDonald's shared selfies with captions about how the importance of health and beauty shouldn't preclude the occasional guilty pleasure.

We are going to indulge in fast food :) #McDonalds #IAmTiredOfTheDiet #WannaEat #Summer #Love

Not So Different From Teens Around the World

Russian teenagers—particularly those in Barnaul—might be relative latecomers to the table of American fast food, but the rituals surrounding McDonald's that they act on social media are surprisingly similar to what has been observed throughout the world. According to the media scholars Andrew L. Mendelson and Zizi Papacharissi [12], teenagers around the world use social media to document rigorously their road trips, visits to fast-food chains, and attendance at parties.

Susan Albers [13], a psychologist, says posting photos of friends at places like McDonald's is almost never about the food, but rather about an individual's ego, and is meant to convey a person's social significance, or even someone's cry for help (if, for instance, the eating habits featured are dangerously unhealthy).

The conspicuous consumption on display in Barnaul last month fits the patterns described by Mendelson, Albers, and others. Perhaps the same behavior would have been observable in Moscow in 1990, had platforms like Instagram existed for youngsters sharing a meal among friends. Those photos of the Soviet Union's first bona fide burgers and milkshakes would have been a sure viral hit.