For Refugees at Katsikas Camp, Life Remains in Limbo 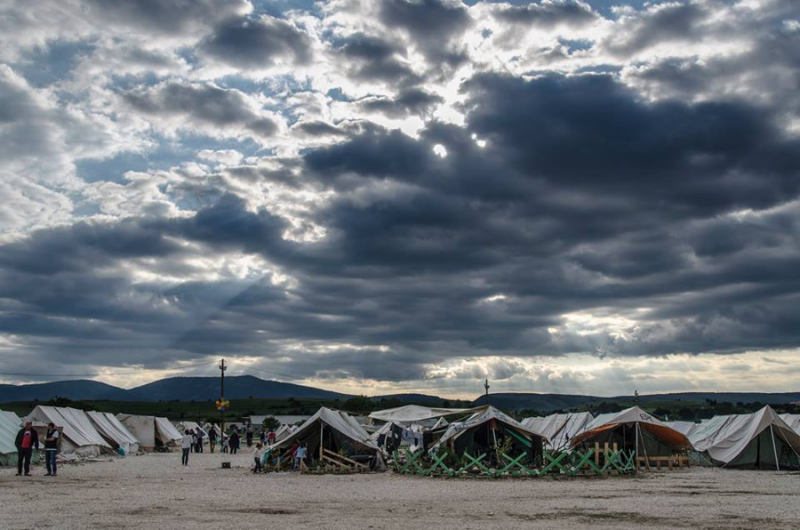 Sitting on the matted floor of his tent with an arm spread across a military-provided cot, Mohanad takes a long, pensive drag off a cigarette. “We didn’t leave because we wanted to. We had homes, we had jobs, we had cars.”

Months of bitterness and frustration are palpable through a caustic smile. “And now I just wait. They might take months, or years, of my life. I don’t know.

“This isn’t living – this is surviving.”

In early March, in the hopes of finding a safe place to start a family, Mohanad left his home near the Syrian city of Homs and, like hundreds of thousands before him, made his way via Turkey, the Mediterranean and the island of Lesvos to mainland Greece. Today, he is one of roughly 800 people living at Katsikas camp, a military-administered refugee camp six kilometres outside the city of Ioannina in northwestern Greece, and one of roughly 40 such camps that have emerged across the country since late winter.

Arriving at Katsikas in mid-April, I was immediately struck by the contrast in settings: picturesque, snow-capped mountains dominate the horizon, with rolling green foothills in the foreground; while the camp is a dusty sea of large jagged rocks and row upon row of identical triangular tents.

Each large tent is given a letter-number combination, and the rows and sections of tents coincide with ethnic and linguistic communities: Palestinian-Syrians, Iraqi Kurds, Yazidis, Afghans, and so on. The weather in the region is volatile and intense, alternating between clear blue skies with punishing sun, and incessant heavy rain, usually for two or more days in a row. 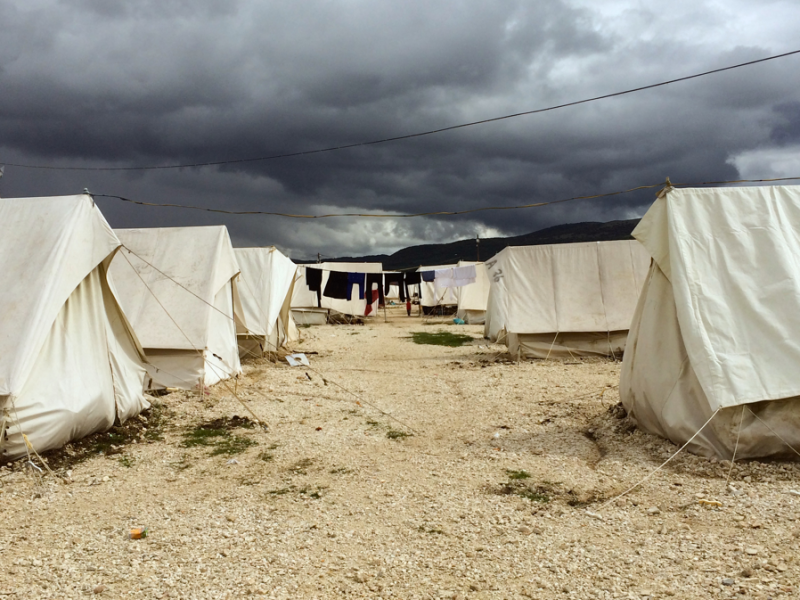 Clothing hangs out to dry between tents in row A. Katsikas, northern Greece. Photo by author.

When she first made her way to Katsikas in March to continue her volunteer work in Greece, María Peñalosa was under the impression that she would primarily be helping distribute milk, diapers and other basic supplies in the newly established camp. “There were seven of us to 1,200 refugees when we arrived,” she recalls. “Everyone was freezing, and there was absolutely nothing in the entire camp besides the tents themselves, without floors. People didn’t have shoes, socks or proper clothes – it was a desperate situation.”

After an especially turbulent first few weeks, a support network began to take shape. A few small NGOs arrived in Katsikas, as did growing numbers of volunteers and increasing donations of food, clothing and other basic supplies from across Europe. With the exception of a small core of long-term mainstays such as María, the roster of volunteers fluctuates regularly, usually numbering around 40.

Through creativity and tenacity, the volunteers at Katsikas have managed to improve the day-to-day conditions for those living at the camp. They have set up equitable distribution systems for clothing and basic supplies, they lead language classes and movie nights, they cook hearty meals to supplement the barely edible and nutritionally inadequate military rations, and they have built communal spaces and private bathing cabins for women, among many other initiatives.

Despite these efforts, however, the living conditions at the camp remain poor. Tents flood when it rains and are stiflingly hot on warm days; toilets, of the portable variety, are extremely unsanitary; drainage systems are inadequate, with puddles of standing water providing a breeding ground for insects. There is a lack of communal spaces for women. Children, who make up about one-third of the camp’s population, are especially vulnerable to diseases—and are perpetually bored. 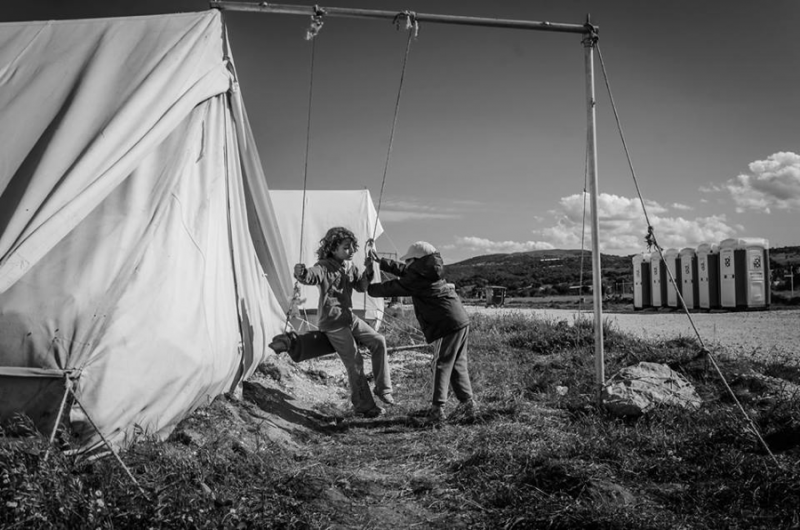 Children play on an improvised swing next to their tent in Katsikas. Photo by Cristina del Campo Martín. Used with permission.

Still, Katsikas is far from the worst of Greece’s military-run camps. Especially since Greek police evacuated the enormous improvised refugee camp at Idomeni in late May and dispersed the thousands of refugees remaining there to new, official sites, reports have surfaced of extremely poor conditions in many of the camps across the mainland.

On another afternoon in Mohanad’s tent, he mentions a brief WhatsApp chat he had with an acquaintance from back home who is currently stuck in a detention centre on the island of Chios.

“I guess I was one of the lucky ones.”

He is referring to his date of arrival in Greece, March 19, one day before the EU-Turkey deal came into effect and the registration “hot-spots” on the Greek islands off the Turkish coast became closed detention centres.

Of course, none of the vague promises or absurdly convoluted proposals in the deal were ever going to be made a reality, not least because many of the suggested measures contravene international human rights law, and because the idea of actually granting visa-free travel to Turkish citizens within three months was never really on the table. The deal was a transparent political maneuver to take pressure off EU leaders seen as doing little to manage—or, more accurately, stop—the continued refugee influx from Turkey into Greece. 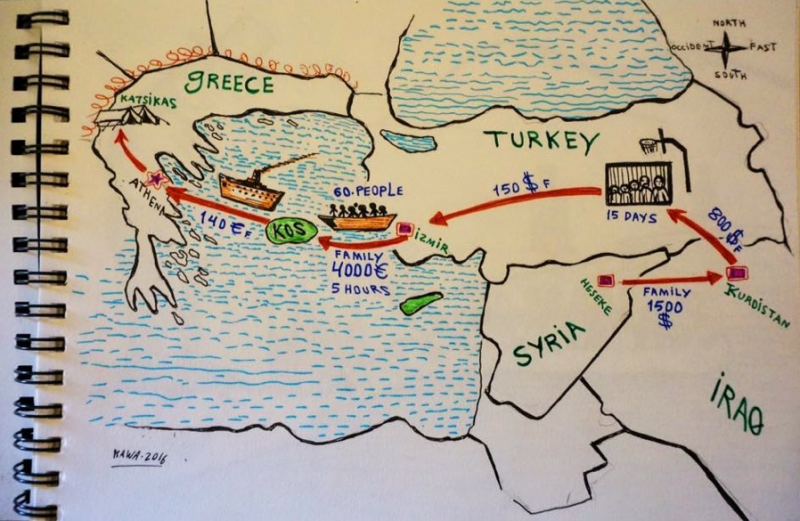 An illustration by a refugee living at Katsikas camp shows the details of his journey to Greece. Photo by Andrew Huang, drawing by Kawa. Used with permission.

This crass political move has serious human consequences. The core concept of the deal is the same notion that continues to inform migration policy in the EU and beyond: deterrence. Make life increasingly miserable for those who arrive, and those yet to come will get the hint and stay home; offer safe and dignified living conditions, and the floodgates will open. It is an approach that shows a complete lack of understanding of the gravity of the situation in conflict areas, and one that abandons any notion of human rights or basic compassion.

Over five weeks I spent volunteering at Katsikas, I was told of lives left behind in cities that have become shorthand for despicable atrocities and brutal violence: Raqqa, Mosul, Sinjar, Palmyra, Aleppo. Yet, the act of fleeing some of the most dangerous places in the world is currently being punished with substandard living conditions and a maddening, perpetual state of limbo and uncertainty; the same principle of deterrence is in effect.

In late May, the UNHCR announced that it would be collaborating with the Greek Asylum Service to begin pre-registration of refugees at camps across the mainland, a necessary part of the protracted process of applying for asylum in Greece or elsewhere in Europe. By late June, no one at Katsikas has been able to pre-register yet; the latest indication is that this will start in mid-July, but official predictions are rarely taken seriously anymore. In a multi-step process that moves at a glacial pace, the refugees at Katsikas are still at Step 0. As many enter their fourth month at the camp and the Greek summer intensifies, they will continue to be pushed to their limits—and beyond. For them, as for some 50,000 other refugees stuck across Greece, there is still no end in sight. 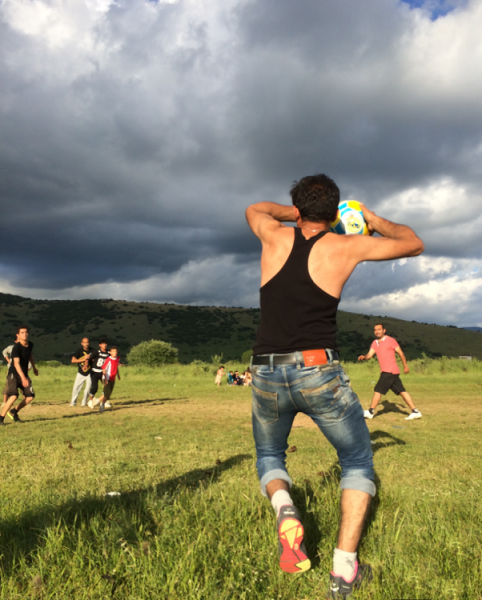 A refugee at Katsikas camp takes a throw-in in a game of football on a nearby field. Photo by author.