European Memes, the Hilarious Antidote to the Shock and Uncertainty of Brexit 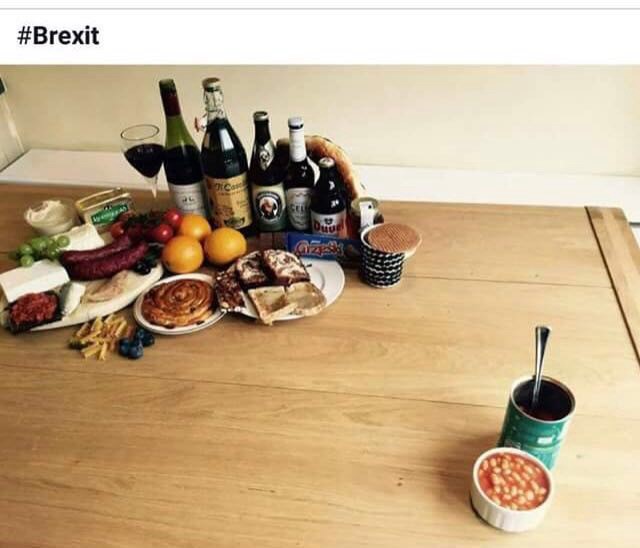 Brexit, in gastronomic terms. A popular meme that made the rounds in the wake of the UK's EU referendum.

Soon after the results of Brexit referendum in the UK came out, the Internet was buzzing with grief-filled tweets, gloomy analytical pieces, and moans and groans of disappointed “Remain” supporters, as well as with cheerful exclamation marks and red-top “Independence Day” covers promoted by “Leave” campaigners. In the 23 June poll, 51.9% of voters in the UK said they wanted to leave the European Union, while 48.1% voted to stay.

The proliferation of memes on the referendum results was a good sign for me. I'm a doctoral researcher at the University of Westminster, and in my research I have found that people use political memes in two sorts of situations: when things have so wrong that the only coping technique is sarcasm and humour; and when things are not great but fixable, and the act of sharing viral pictures assists reconciliation and boosts optimism. I reckoned that the post-Brexit memes were an example of the second case.

Memes are the fast-food media of the digital generation: they condense complex issues into an amusing yet meaningful combination of picture and text. In the meme pictured at the top of this article, for example, the juxtaposition of European delicacies with the stereotypical British baked beans doesn't add analytical depth to the discussion of the referendum results. Yet it boils the argument down to materiality: bon appetit, Brexiters, this is what's left on your tables now.

I was particularly interested in the memes continental Europeans shared on Twitter. Although EU citizens are legally allowed to reside in the UK, those who do live there were not allowed to vote (unless they had a British passport). Of course, neither were EU citizens elsewhere in Europe, though the decision would ultimately affect them as well. European memes featured an intriguing interplay of national stereotypes about Britain, counter-references to the local politics of European member states, fury at the Brits, and offered a snapshot of the pan-European migrant rhetoric—a tremendously hot topic nowadays.

“Adopt a Brit”, a spoof campaign started by a Romanian newspaper, offered “Remainians” the chance to become Romanians and thus stay in the EU, complete with a suggested design for the Remainian ID card. 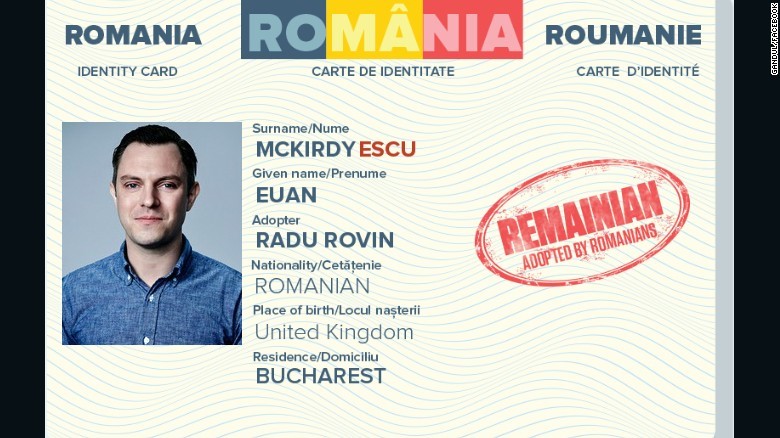 A spoof identity card for “Remainians” who wish to become Romanians and stay in the EU.

Western media outlets including CNN reported the story, while on Twitter a mix of users endorsed the idea, including Brits who shared the suggestion among their multi-national groups of followers.

Importantly, this campaign followed months of negative depictions of Romanian migrants in the UK tabloids. An Internet meme with a viral pun therefore became a small act of digital revenge against that coverage.

If you're a #UK #Remainian you can be adopted by a #Romanian here https://t.co/UevyPurOT3 #Brexit

I’M A ROMANIAN. I WANT TO ADOPT A REMAINIAN. #Brexit https://t.co/SaY39qTacF

Other European users picked up on the narrative of migration. In one photo circulated on Twitter, a poster on the facade of the Palacio Cibeles in Madrid, Spain was digitally manipulated to read “British Refugees Welcome” instead of “Refugees Welcome”, adding a layer of solidarity to the Brexit results.

Instead of blaming the UK voters, these users emphasised—with a touch of soft humour—that Brits were still welcome in their country.

From royalty to migrants

Some Italian and Portuguese meme makers linked Brexit to the British royal family, although neither Queen Elizabeth II nor any other Windsor had revealed their views on the campaign leading up to the vote.

Several Italians blamed Her Majesty for letting the referendum happen in the first place. The meme below presents the UK-EU relationship as a friendship or romance that has come to an end. 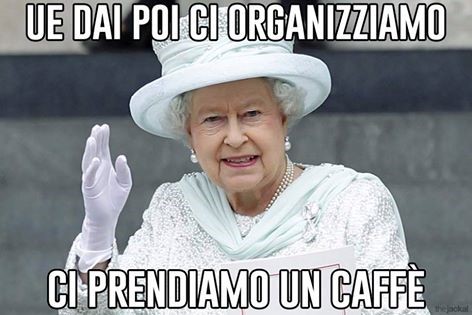 This Italian meme reads: “Come on, EU, let us go for a coffee.”

The image below quotes a well-known tagline from “Gomorra“, an Italian TV series about the Neapolitan mafia: “We will regain what is ours”. 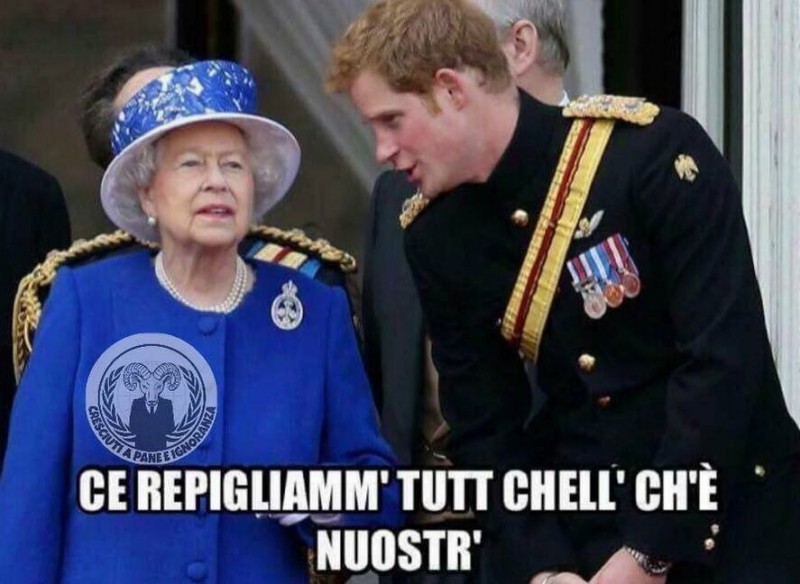 This Italian meme reads: “We will regain what is ours.” The badge on the Queen’s coat reads, “Raised on bread and ignorance.” Via Twitter user @@goddessofnight_

This meme correlates with another popular joke implying that the Queen had personal motivations for supporting the “Leave” campaign. “They say you are too old to go out,” it goes, “but you are Queen Elizabeth, and to show them who is in charge you make the whole country get out”. 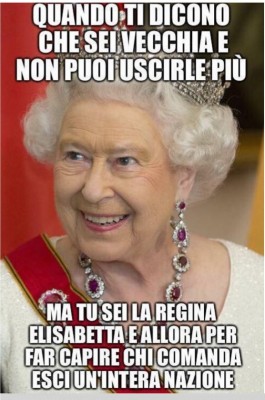 “They say you are too old to go out, but you are Queen Elizabeth, and to show them who is in charge you make the whole country get out”. Via Twitter user @Policrom0.

Globally popular Prince William, Duchess of Cambridge Catherine and their children also made appearances. This meme, for instance, offers the English royals back-handed congratulations on their newly gained “migrant” status in the EU. 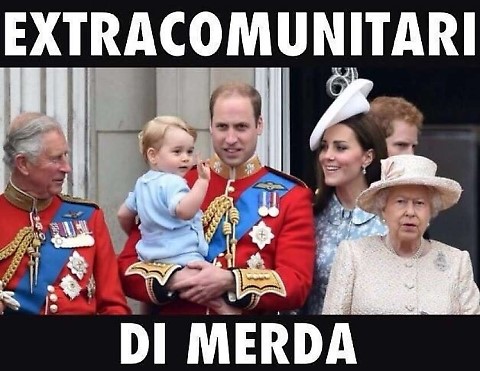 Portuguese Twitter users, accordingly, reminded Her Majesty's great-grandson to reconsider the company he keeps in the sandbox:

George, I don't want to see you playing with Pièrre, Müller and Miguel. Do you hear me? #Brexit

Another meme marries the debates on migration and the EU refugee crisis, highlighting the flexibility of the notion of “unwanted migrants”. 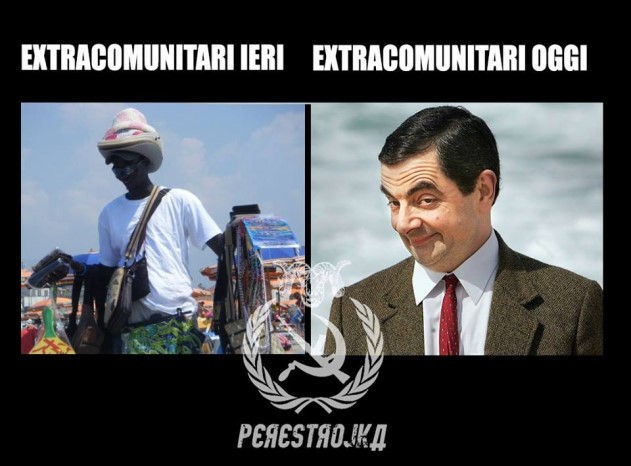 Any collection of European memes would be incomplete without mention of football. Users tied England’s defeat by Iceland in a 2016 European Championship match to Brexit:

Iceland 👏👏👏 #ENG wanted to be out of Europe really so much… #Brexit #ENGISL #EURO2016 pic.twitter.com/jRlhSMHD42

‘The drunks & cops should leave Benidorm as well’

The Spaniards and French also expressed their fury at the Brexit results by reminding Brits that the prices of holidays, wine and groceries from European countries would rise. They also highlighted the less than ideal behavior of British citizens who visit the beaches of France and Spain.

Tweet: In my neighborhood… people are waking up inspired. #HappyFriday #Brexit
Image: “Brits, it seems good to me that you are leaving the EU, but the drunks & cops should leave Benidorm as well, assholes!!!”

“First images of the humanitarian crisis provoked by #Brexit…” 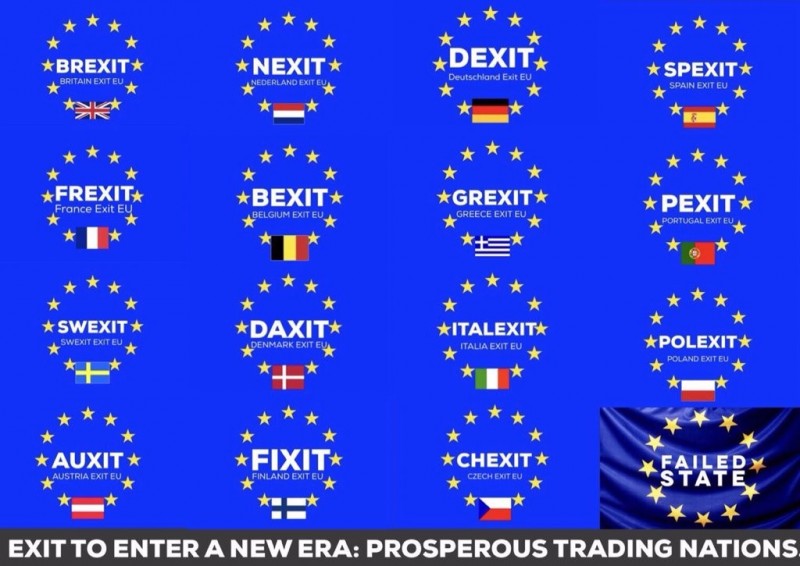 A meme imagining other types of exits from the EU.

A considerable number of memes speculated that other European nations could follow the Brexit lead. For instance, French social media users seized the opportunity to express their discontent with the EU and suggest a “Frexit”. 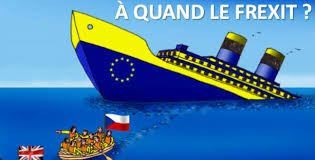 “When will a Frexit happen?”

But then came the Greeks, who warned against making rushed, irreversible decisions, a comment on their own domestic politics. However self-critical the meme below may seem, it nonetheless skillfully sums up the crisis faced by the EU. 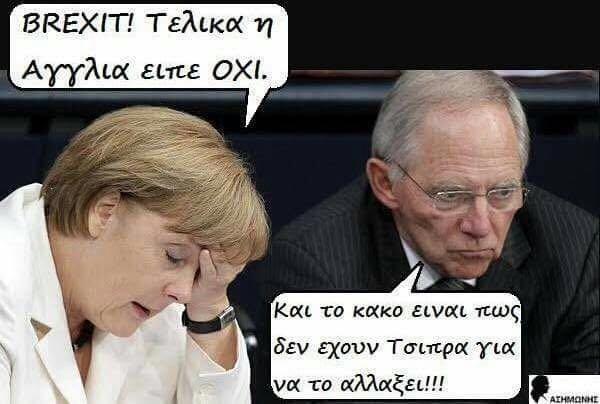 Angela Merkel: “BREXIT! In the end England said NO.”
Wolfgang Schäuble: “And the worst thing is that they don’t have Tsipras to change it.”

Tsipras is, of course, Greek Prime Minister Alexis Tsipras. In July 2015, he urged the Greek population to vote against austerity measures suggested by the EU as a way to deal with the country's troubled economy. Greeks listened, and the referendum resulted in 61% voting “No” to the European plan. Tsipras then changed his mind and signed the unpopular deal with the EU just a week after the referendum. The meme shown above pokes fun at governments’ flexible attitude to the people's will when the latter doesn't accommodate political leaders’ plans.

Last but not least, in a sweet—in fact, buttery and sugary—campaign, several groups of volunteers sought to comfort people in the UK and in France by offering free pastries.

Before the referendum, #operationcroissant activists from France distributed freshly baked croissants to passersby around King's Cross in London. After British authorities banned distribution of the goodies, citing hygienic concerns, activists instead gave out postcards written by French citizens to their neighbours across the English Channel.

After the vote in support of Brexit, the British #operationscone unfolded in response to the French kindness. Enthusiasts rushed to St Pancras in London to offer free scones and cheering postcards to French passengers arriving in London by the Eurostar railway service, which crosses the English Channel by undersea tunnel. The act of sharing a typical English treat with Europeans added warmth and good spirit to the digital interactions.

This is #OperationScone! Londoners are handing out scones to French @Eurostar arrivals to share that they #LoveEU pic.twitter.com/3UMzv344PK

Dear Europeans, you're marvellous. Truly spiffing. I'd be proud to share a scone with you anytime ❤️ #operationscone pic.twitter.com/Fga1tUFhVp

One of the most reassuring outcomes of the Twitter research on European memes related to Brexit was the ambiguity of authorship and sharing. In the flow of Internet memes it was challenging to distinguish migrants from non-migrants and Brits and non-Brits. Proof that whatever happens next regarding Brexit, one still does not need to present a UK passport or proof of EU membership to fully embrace the pleasures and foibles of the digital space in all its multilingual, multinational, multi-allegorical glory.