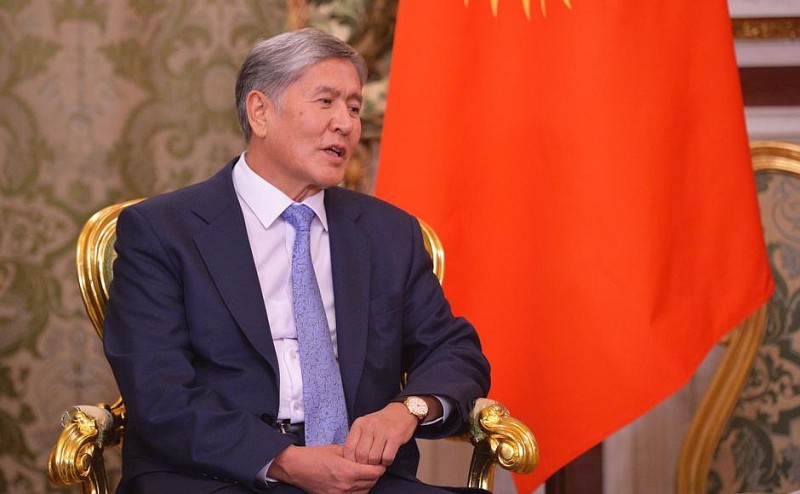 Social media in Kyrgyzstan is abuzz at the sudden appearance online of a soulful singing performance by President Almazbek Atamabayev, who has apparently elected to show off his more sensitive side.

The Russian-language song “In Spite of Fate” appeared on YouTube on July 2 and was accompanied by suitably downbeat snippets from Soviet-era Kyrgyz film “Provincial Romance.”

Atambayev does not himself appear in the clip, which had racked up around 75,000 views by July 4, but his voice is unmistakable.

Representatives from the Ordo production studio, which recorded the song, told local outlet Kloop.kg that the president is also the person playing the acoustic guitar.

“This is one of my first songs,” Atambayev drawls lugubriously in the intro, as if addressing a captive audience at an intimate acoustic set. “It is like a motto for me. This song helped me to beat a path through all the difficulties that befell me in life.”

The two-minute song that follows is a melancholy recollection about a lost lover. Referring to “memories like droplets of rain” and swimming to “the lighthouse of your sad eyes,” the song evokes a protagonist weighed down by tribulations and misfortune, rather than the businessman-turned-opposition politician who came to power on the back of a bloody revolution.

Other presidents in the region have turned out happier fare.

Think of Turkmen leader Gurbanguly Berdymukhamedov’s “Forward Only Forward, My Dear Country Turkmenistan” — a blandly bubbly streak of ethno-disco trash as lacking in self-reflection and humility as Atambayev’s tune is in cheer. And it is hard to see Atambayev embarrassing thousands of his browbeaten citizens, including all his top officials, into participating in a mass rendition of his song.

But while Atambayev, four-and-a-half years into a single, six-year term in office, is unlikely to erect a golden statue of himself anytime soon, this song does appear to have helped him out on the image-building front.

Just as when news broke last year that his youngest daughter, Aliya, had donated almost $3,000 raised from a painting exhibition to a Down Syndrome charity, social media users have been making favourable comparisons to the former ruling Bakiyev family, whose talents barely extended beyond stealing.

“Recently I have been discovering a new Atambayev,” wrote Facebook user Aitpasgul Aitpaeva on the wall of member of parliament Janar Akayev, who posted the music video.

This is a notable softening of image from the thin-skinned, tantrum-throwing politician fond of engaging in unseemly diplomatic spats and haranguing female human rights activists in public.

While Atambayev may portray himself as a grief-stricken lover struggling against a tide of ill-luck, Kyrgyzstan might have been a much happier place now had he struggled a little harder and pushed through much-needed political reform in the graft-prone country.

Still, the leader who first grew rich in the early 1990s by setting up a printing house pumping out Russian translations of popular Western books and claims he wanted to be a writer as a child has now proven himself a man of words, if not of deeds.

And those not fond of his rueful debut hit should be aware that there may be more where it came from. At an end-of-year speech last year, the glum strummer, who turns 60 in September, revealed he plans to take up the piano in retirement.