Refugee Children in California Say Discrimination at School Is Getting Worse 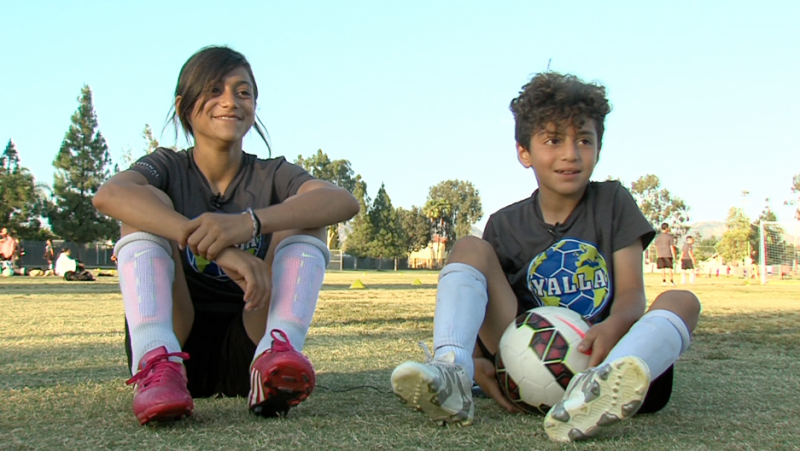 Amira Matti and her brother, both from Guatemala, rest after soccer practice at YALLA, a San Diego-based after-school program that teaches soccer to refugees and immigrants and provides academic mentoring. Credit: Jean Guerrero

This article by Jean Guerrero originally appeared on PRI.org on June 27, 2016, and is republished here as part of a content-sharing agreement.

Amira Matti, 11, remembers the day her little brother was almost kidnapped near their home in Guatemala City. “My little brother comes running to us and he says, ‘Someone tried to get me,’” she said. “It looked like he’d seen a ghost.” A passing driver had rescued him from the kidnappers.

So Amira's family decided it was time to get out of Guatemala, with its rising gang violence, and head for the United States. On the way, Mexican officials stopped the family and put them in a detention center for more than five months. Amira said it was a nightmare.

“You couldn’t sleep because there were these huge bugs that were roaming around the whole place,” she said. “It was like a thousand of them.”

When the family made it to the US, they applied for asylum in San Diego. Amira thought the hard part of their journey was over. She realized it wasn’t as soon as she started second grade — learning English was tough, and she had missed months of school when she was detained in Mexico. “Those past five months I didn’t learn anything,” she said. “I felt dumb because I didn’t know the answers to any questions my teacher would ask me.”

Amira's family is among a rising number of refugees fleeing violence in Central America who are encountering challenges in the form of discrimination and educational difficulties.

She said her classmates bullied her. “Kids would come up to me, and say, ‘Hi, weird girl,’ and I wouldn’t understand anything because I didn’t know any English in the beginning and I would think, this is a country I’m not supposed to be in. I’m not welcome here,” she said.

But then her family learned about YALLA, an after-school program that started six years ago. It teaches soccer to refugees and immigrants, using the sport as a fun hook for serious academic services.

Coached by YALLA’s mentors and its English-language software that helps with reading and writing, Amira quickly caught up with her classmates. “When you didn’t understand something in English, it would explain it to you in Spanish, and it would tell you to repeat it,” she explained.

She also, finally, felt like she belonged somewhere. At YALLA there are students from Iraq, Sudan, Honduras and elsewhere. They bond because they’ve all been uprooted.

Amira’s little brother Matti (his first name is the same as his last), 8, also practices English in the YALLA program. Riyam Mansoor, an Iraqi refugee, helps him. Mansoor says many of the program's mentors are immigrants, and their friendships with the students are key to success.

The soccer part helps build ties too. “With soccer, you don’t usually need a language to speak in. It’s like a universal language,” she said.

Mark Kabban, who started the YALLA program, said soccer helps the staff build friendly relationships with the students. “We’re able to have healthy manipulation,” he said. “We’re able to influence them a lot more in their academics because of the things we have in soccer.”

This year, 20 high schoolers graduated from the YALLA program, receiving a record $2.4 million in college scholarships. But Kabban has noticed a change ahead of the next funding round: Some donors are withholding their support. He thinks it’s because of the current immigration debate in the US electorate.

“Politically, what’s happening I think in the shift of public attitude towards immigrants, especially people coming from the Middle East, has affected our young people,” said Kabban.

“There have been some donors who don’t like that we serve Muslim kids,” Kabban said, who would not name a particular donor. “At the end of the day, I’m like, if they don’t want to invest in the diversity of our kids, then I don’t want their money.”

Kabban also said that YALLA students are complaining of more discrimination at school.

Amira said she feels supported at YALLA, and has learned to believe in herself and her big ambitions — she wants to be a heart surgeon — even though some of her non-immigrant classmates have told her she can't be a surgeon because she’s Guatemalan.

Amira said she is keeping her eye on the goal.