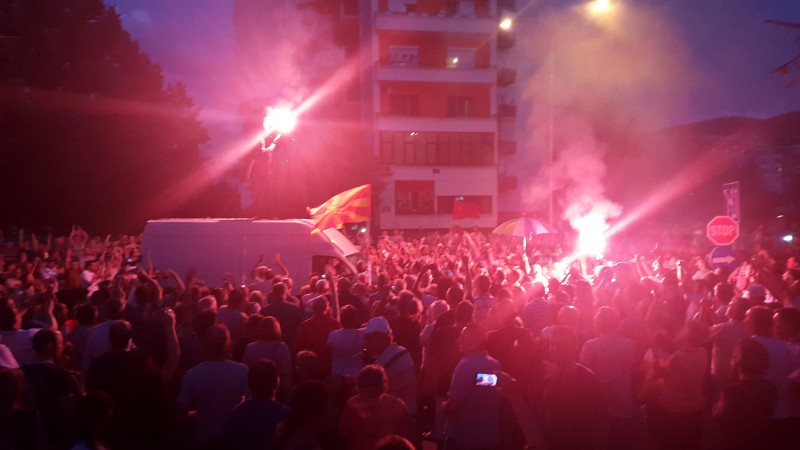 The people celebrate the release of the Colorful Revolution van on June 27, 2016 in Skopje. Photo by F. Stojanovski, CC BY.

One of the key demands of Macedonia's Colorful Revolution is putting an end to the misuse of power by law enforcement bodies in the persecution of protesters, who view this excessive use of police force as a form of harassment. The movement takes its name from protesters — who have been speaking out against state corruption — tossing paint on government buildings and landmarks.

Some prominent protesters have been put under house arrest, or are frequently detained through dramatic arrests involving special police forces. Such detentions do not last, as the police cannot press criminal charges for ‘vandalism,’ which is a mere misdemeanor under Macedonian law. However, they do serve as tool for intimidation, not just for the protesters, but also for supporters of the ruling party who might consider defecting.

In several cases, such police actions have sparked new protests, including spontaneous gatherings in front of police stations whenever news about a new detention spreads via social networks.

During a June 27 protest, police attempted to arrest the drivers of a van that was carrying audio equipment and supplies for use by the protesters. Traffic police and about 30 members of Alpha — a special police unit comprising mobile, armed, plainclothes officers in charge of countering violent urban crime — stopped the van near the parliament building. The people who were standing in front of parliament listening to speeches moved towards the van; once the protesters approached them, the police fled. One of the protesters, Zamir Mehmeti, then climbed the van and, holding a Macedonian flag and a flare, gave an impromptu speech:

This is another proof that if we are united, nobody can harm us, nor [Minister of Interior] Mitko Čavkov. They are cowards, they are used to making problems when nobody is daring to resist them, otherwise they are powerless. 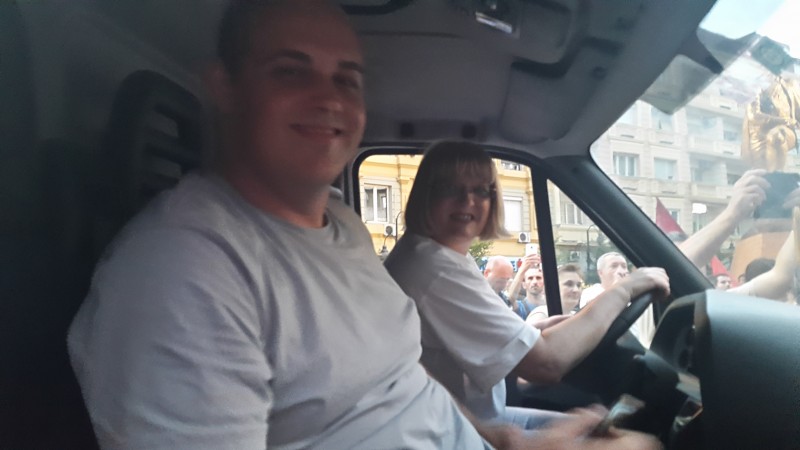 The van was driven by Lidija Dimova, a member of parliament who sits in opposition. The portal Slobodna Makedonija (Free Macedonia) reprinted the Facebook status of activist Alek Gochev, who was riding shotgun:

After departure from the protest more than 30 policemen stopped the van, driven by Lidija Dimova, MP. At the moment when the crowd gathered in front of the Parliament heard about this, they started coming towards us in order to help us. When our police realised that the citizens are approaching, it took them literally 5 seconds to enter their vehicles and escape as some kind of mafia gang. Is this a normal police?! Thank you, good people, you make our fighting and living worthwhile!

Later that evening, after the protest ended and people were walking back towards their homes, the police did manage to arrest two other prominent protesters. Pavle Bogoevski and Simona Spirovska were surrounded by special policemen and detained — allegedly for not producing I.D. cards — at the nearby police station. Both were released shortly afterwards, as protesters began to gather in front of the station, having been alerted via their social networks. 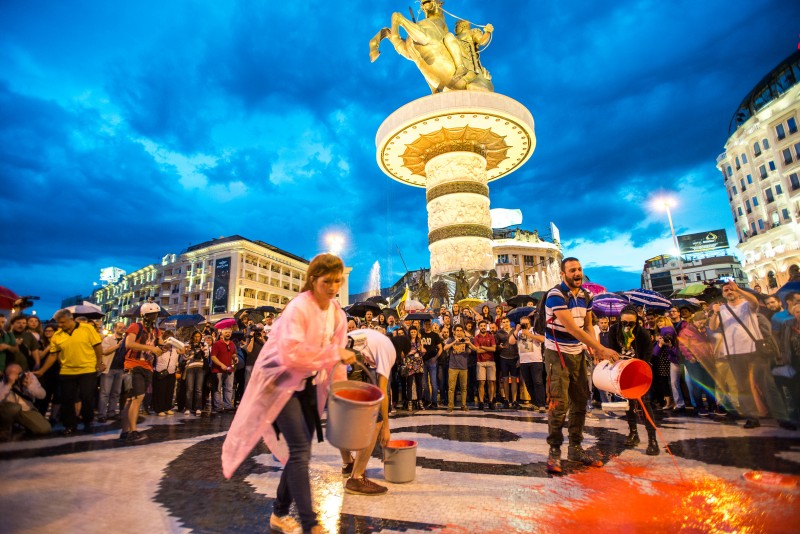 Activists Simona Spirovska and Pavle Bogoevski, photographed during painting of the Skopje main square red during protest performance commemorating the murder of Martin Neškovski on June 6, have been singled out for police harassment. Photo by Vančo Džambaski, CC BY-NC-SA.

This was not the first time that Bogoevski suffered a ‘spectacular arrest.’ In Macedonia, this term is used to describe a police procedure meant as a show of force and performed with a large number of heavily armed officers. Pro-government television crews often get invited to record such events and then broadcast the footage to emphasize the victim's humiliation. Leaked wiretaps have shown that such coordination is being done by high-ranking officials of the ruling party VMRO-DPMNE — in fact, the Special Prosecutors’ Office is currently investigating the 2011 arrest of opposition leader Ljube Boškoski as a case of torture.

Bogoevski also seems to be targeted. On June 19, riot policemen detained him during another Colorful Revolution action, when the activists attempted to display a critical banner close to where the ruling party was celebrating its anniversary. Not being allowed near the celebrations, the protesters tried to unfold the banner across the Vardar river, about a hundred meters away. The banner's text ironically asked, “When will you celebrate 10 years of MVRO?”, referring to wordplay that the former Minister of Interior used in a leaked wiretap, combining part of the name of the ruling party (VMRO) with the acronym for Ministry of Interior (MVR). In the wiretap, the minister explains how her official premises served as the party's local campaign headquarters during rigged elections.

When some known ruling party thugs attempted to storm the activists’ gathering and grab the banner, the police intervened, preventing further physical violence. However, they let the attackers go and pinned Bogoevski to the ground, even though he was reportedly not resisting arrest at all and had, in fact, been trying to lower the tension during the whole event:

Moment of releasing Pavle Bogoevski from the police station.

Over a hundred people quickly gathered in front of the police station. It was difficult to estimate exact numbers, since — quite curiously — the street lights in the area had been turned off, although they worked normally in the neighboring streets. Subsequent to the protest starting, Bogoevski was released, but only after the police slapped him with a misdemeanor charge “for not heeding a direct order” by a police officer. 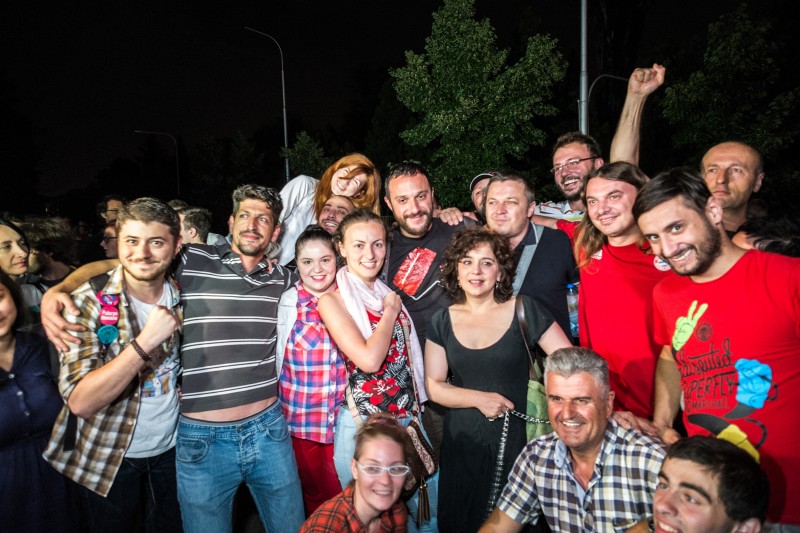 Group of Colorful Revolution protesters celebrating the release of Pavle Bogoevski (in the middle) from police custody. Photo by Vančo Džambaski, CC BY-NC-SA.

While most of the incidents using excessive force and harassment against protesters have backfired, many Colorful Revolutionaries are asking, “What next?” as they brace themselves for a more severe backlash before the anticipated fall of the regime.