According to the Indian People, The Real Brexit Happened In 1947 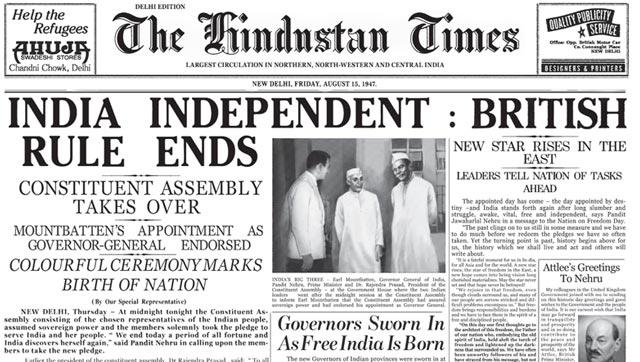 On June 23, 2016, citizens of the United Kingdom took part in a historic referendum to vote on whether or not they will remain in the European Union (EU). After a long and tumultuous few months of campaigning from both the Remain and the Leave camps, Nigel Farage’s UK Independence Party prevailed, with 52% of the country voting to leave the EU.

Much of the Leave campaign's focus was on concerns about immigration rather than on ideas about policy, with Farage perpetrating the idea that a massive influx of refugees into the UK through the EU’s open border system could lead to a spike in crime and terrorism and a departure from their traditional national identity.

The UK is the first nation to ever leave the EU and the repercussions from this vote were felt — both in the UK and in the global market — almost immediately. The pound fell to its lowest value in 31 years while investors have been pulling money out of Britain due to speculation about its financial future.

As the world continues to watch in anxious speculation about what Brexit will mean for the future of European economics and how this monumental decision will re-shape trading for the rest of the world, many countries have reacted to the Brexit news in remarkably different ways. Despite fears of a similar referendum for independence within Delhi, Indians have largely found the news of Britain’s exit from the EU to be comical and reminiscent of a similar Brexit that took place in 1947 within the nation.

Some Indians found Britain’s perceived threat to its national identity and sovereignty to be wildly hypocritical considering all of the countries, including India, that Britain has ruled over throughout its history. The Indian Brexit involved two centuries of mutinies and protests; the nonviolent movement led by Mahatma Gandhi compelled the British to grant India independence in 1947 and leave soon after.

Indians took to Twitter to express the irony that resulted from the Brexit vote and tried to understand the temperament that most Brits who voted to leave had towards their country’s border security. One Twitter user summarized India’s shock at the simplicity of the Brexit vote:

Rohan, an Indian comedian based in Mumbai, warned the EU that Britain might take actions similar to their maneuvers after leaving India; that is, taking all of the wealth with them:

Dear EU, if Britain has any of your jewellery, now would be a good time to take it back

Others, such as Derek Simon, could not comprehend how Britain’s citizens could be worried about immigration when they were usually the immigrants:

Can't think about #Brexit without thinking about this. pic.twitter.com/uRfIw7LGgu

Journalist Manu Joseph simply summed up India’s feelings regarding the Brexit vote in one tweet:

Unsurprisingly, many Indians share similar sentiments, believing that Britain’s vote is not only unprecedented but hypocritical based on the country’s history with oppression and violence.

Charu Sharma tried to predict what impact Brexit will have on India:

As Britain begins to prepare for the economic crisis that could follow in the wake of Brexit, India is preparing for troubles of its own. Despite all of the humor that Indians have about the vote, there are numerous reports of economic downturn in the region as a direct result of Brexit and even talk of the Kashmir region — whose territorial rights have been heavily disputed between India and Pakistan in the past — casting its own referendum on independence from either nation.

While Brexit might seem comical and ironic at first, its implications — both within India and throughout the rest of the world — could reshape the structure of global politics as we know it.