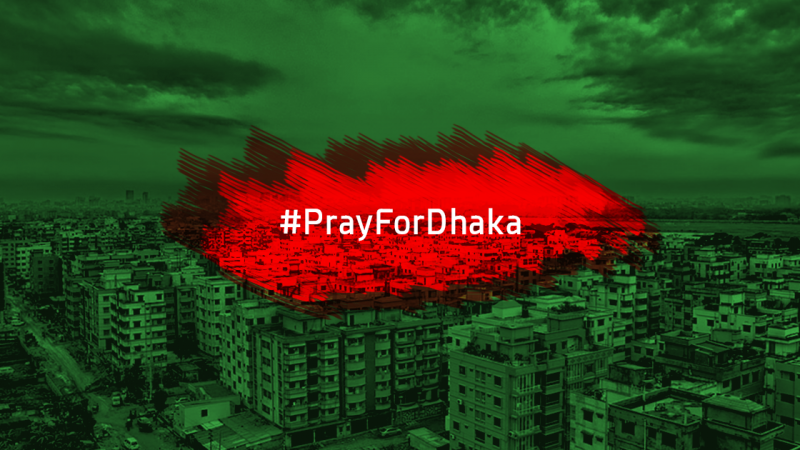 On Saturday, July 2, 2016, a joint force combining the Bangladesh Army, paramilitary group Border Guard Bangladesh, the police and the elite force Rapid Action Battalion stormed the Holey Artisan Bakery at a diplomatic neighbourhood in Gulshan area of Dhaka to end a hostage crisis.

Late Friday night, between seven and eight assailants stormed and took control over the cafe in the Bangladesh capital, an establishment frequented by expats, diplomats and wealthy Bangladeshi. The cafe/bakery has a very European feel and turns into a restaurant called O'Kitchen. Ironically, the restaurant is situated in one of the most secure areas of Gulshan; it is known as diplomatic zone, as the majority of the country's embassies and international organizations are located there.

The Inter-Services Public Relations Directorate (ISPR), the mouthpiece of the military, has confirmed that they found the bodies of 20 hostages — mainly foreigners, but also some Bangladeshis — most of whom were killed using sharp weapons. Thirteen hostages, including one Japanese national and two Sri Lankan nationals, were rescued and six perpetrators killed. During the Friday night standoff, two police officers were killed and more than 20 injured during a gunfight with the hostage takers, who hurled grenades at them.

#DhakaAttack-Commando Op that brought an end to siege. Never imagined this would be a scene from a city we love. pic.twitter.com/sTMxWWRwIY

ISIS, an Al Qaeda offshoot which has come to control large parts of Iraq and Syria using openly brutal, oppressive and violent tactics, has claimed responsibility for the attacks; their affiliated media, the Amaq News Agency, shared on its Twitter account some gruesome images from the scene, including the bloody bodies of some hostages. The authenticity of the pictures — or the claim — could not be confirmed.

On Friday night, eyewitnesses claimed about eight assailants — armed with AK22 guns, swords and bombs and shouting Allahu Akbar (meaning “God is great” in Arabic) — barged into the restaurant taking more than 20 hostages, including foreigners. Some visitors were able to flee the scene right away and later shared what they witnessed. Two police officers were killed — as the first respondents, they were taken by surprise. As the night progressed, at least 40 people, including policemen, were injured.

During the 12-hour hostage situation, netizens living nearby expressed some of their most agonizing moments through social media. Facebook user Fahim Razzaq heard some of the first gunshots and posted:

I've been hearing gunshots from my room. Supposedly there is a hostage situation at Holey Artisan Bakery at Road No 79, Gulshan 2 next to Lake View Clinic where it is rumored 2 people may have been killed. If anyone on my facebook friend list happens to be at this side of Gulshan, please stay indoors, lock your gates and if you are out please do not come here till this situation fades. Please also spread the news to anyone else you know who lives in this area.

I just heard one more blast, this one was louder than the last two. This ordeal needs to end soon, and safely as possible. #DhakaAttack

Soumir Baroi, whose fate is yet to be known, was trapped inside one of the bathrooms, but managed to establish contact with his brother through text messages. A young woman was also able to contact her father during the seige.

One rescued hostage told the media that the gunmen asked hostages to recite from Quran and tortured those who could not. They behaved well with those who could, even providing meals. Their main targets appeared to be foreigners.

There was soon a media blockade and the area within a four kilometre radius of the restaurant was cordoned off to allow the authorities to carry out the offensive against the attackers. However, some media were criticised for their irresponsible reporting:

On Saturday morning, authorities went into action as two armoured vehicles broke down the walls of the cafe to enter the premises. After a gunfight and explosions, six gunmen were killed and 13 hostages rescued. One gunman has reportedly been taken alive. Foreign missions are on high alert in Dhaka and embassies have asked their citizens to stay indoors.

For Bangladesh, this kind of attack is new, although Bangladeshi militants had previously murdered a number of secular bloggers and online activists. Since 2005, at least 23 bloggers, publishers, editors and activists have been killed and scores of others — including foreigners and people of other religions — attacked or threatened with death for their progressive and secular views.

Even as the hostage situation unfolded late Friday night, unknown assailants hacked a Hindu priest with sharp weapons inside a temple. They left him badly wounded, thinking he was dead, but locals rushed him to hospital where his condition remains critical. Another priest was killed that very morning by three men on a motorcycle, adding to the tally of dozens of brutal attacks in Bangladesh.

These attacks have long-term implications on Bangladesh's progress. Expatriate blogger and security engineer Ishtiaq Rouf wrote in a post:

The result of this earth-shaking attack will be terrible, especially for a country like Bangladesh. Imagine yourself in the shoes of an Argentinian citizen. They don’t care how much you cried over Messi’s retirement from international football, but they will care when the severed head of a fellow citizen will be broadcast over the internet. Imagine being an Italian citizen whose country houses some 50k Bangladeshi laborers. Or a Scandinavian citizen whose country funds countless projects. Or an orange-haired racist bigot who is looking for an excuse to uproot the RMG [Ready Made Garments] industry from cheap-labor countries like Bangladesh.

So please let us stop protecting those who did nothing to stop this inevitable day from coming to pass. Let us not draw up more excuses for people and ideologies that inspire such acts.

Instead, we should treat this as a kick up our collective backsides. Do something, or something will have been done to you. Eventually. Surely.