Thai Activists Use Toys, Balloons and Dolls to Campaign for Democracy 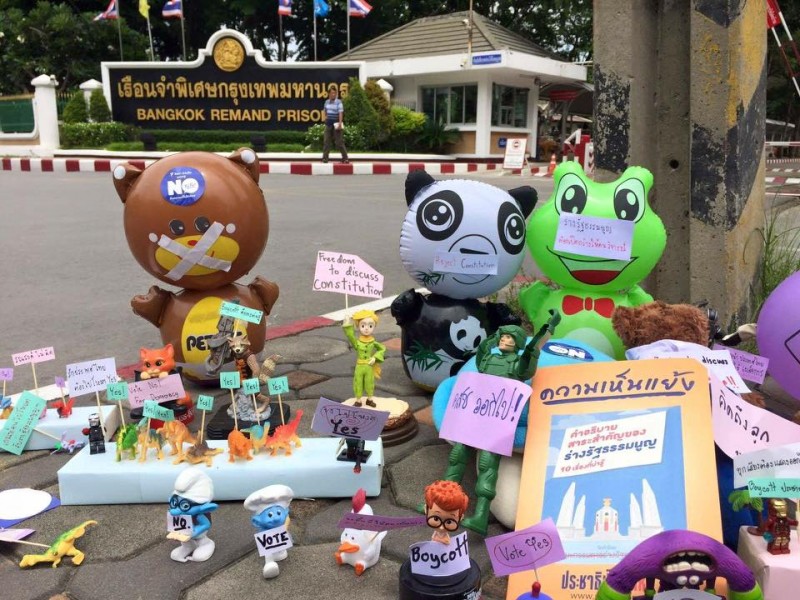 A ‘toy protest’ in front of a Bangkok prison where anti-Junta activists have been detained by the police for distributing flyers. Photo from the Facebook page of Liberal League of Thammasat for Democracy

Thai activists are getting more creative in their campaign to reject the proposed charter of the military-backed government.

After the arrest of more than a dozen activists who were merely distributing flyers about the charter, several groups across the country launched various types of activities to dramatize the call for democracy such as using toys and dolls to ‘speak’ for freedom and releasing balloons with a printed message that reads ‘campaigning is not a crime’.

The Thai army staged a coup in 2014 and has remained in power despite its pledge to restore civilian rule once it implemented political and economic reforms. It has drafted a charter which will be subject to a nationwide referendum on August. Activists and political parties describe the proposed charter as a threat to democracy because it allegedly contains provisions that will expand the authoritarian powers of the military.

Since 2014, protests and the gathering of five or more persons have been outlawed in Thailand. Recently, the Junta prohibited groups from campaigning for or against the charter and the upcoming referendum.

The police invoked these laws when they arrested members of the New Democracy Movement (NDM) who were caught distributing statements against the charter.

Some supporters of the NDM visited the detained activists while carrying pink balloons with the message “campaigning is not a crime.” Authorities confiscated the balloons.

This inspired students from Chiang Mai University to release purple balloons in support of the right of the people to speak about the charter. 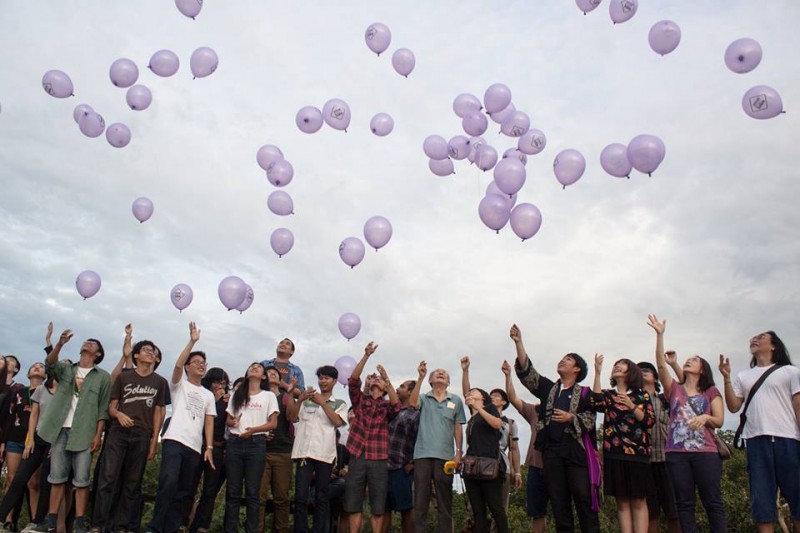 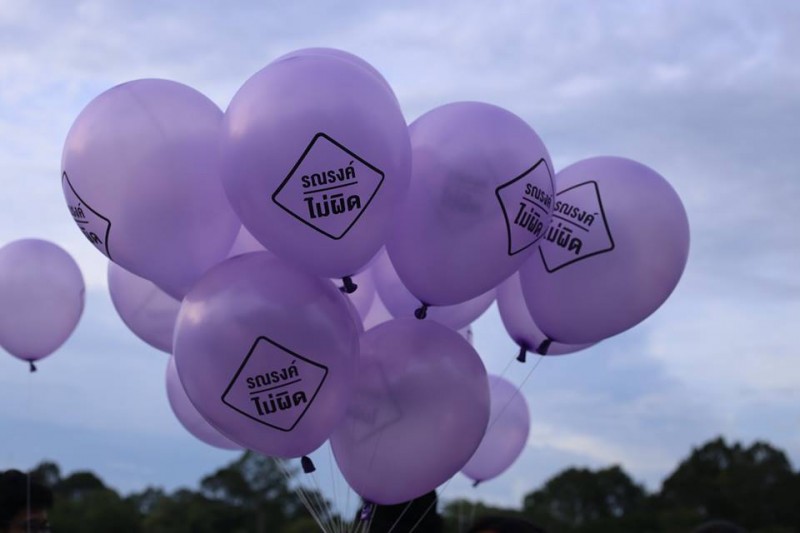 The message in the balloon reads “campaigning is not a crime’. Photo from the Facebook page of the Liberal Assembly of Chiang Mai University for Democracy – LACMUD 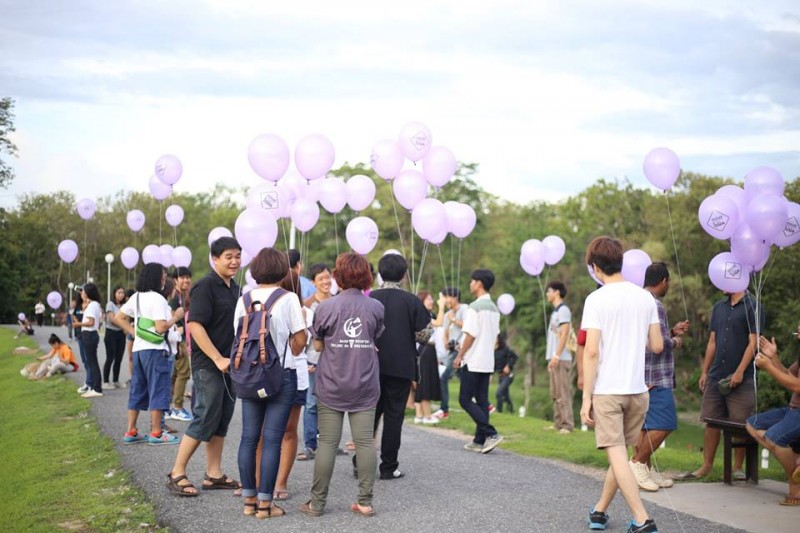 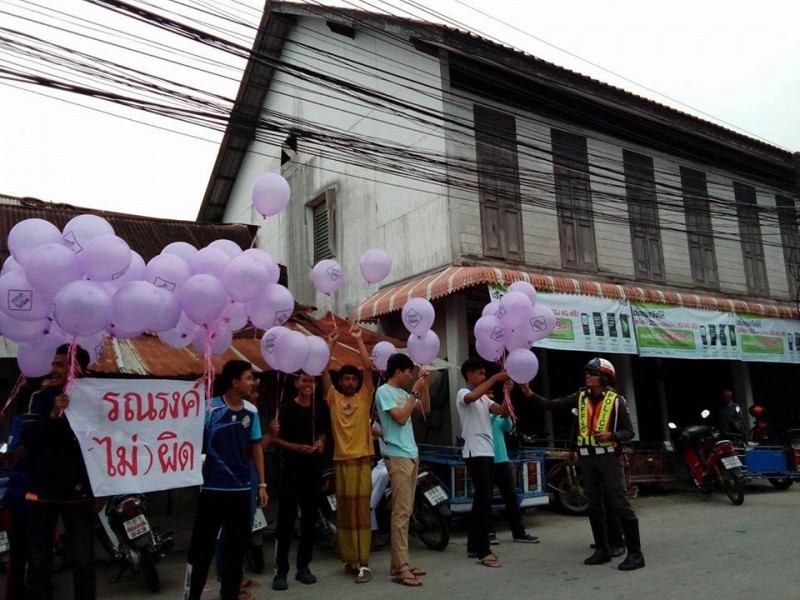 Activists from south Thailand also used purple balloons in their protest. The police briefly detained the protesters. Photo from the Facebook page of Min Law

Meanwhile, the Liberal League of Thammasat for Democracy initiated the ‘Free Dolls for FREEDOM: Let dolls speak for us’ campaign, which enjoins the public to share their views about the referendum and the charter by posting photos of dolls and toys. The campaign aims to demonstrate the injustice of the law, which prohibits the public from campaigning against the policies of the Junta. The campaign can be monitored through the hashtag #FreeDollsForFREEDOM. 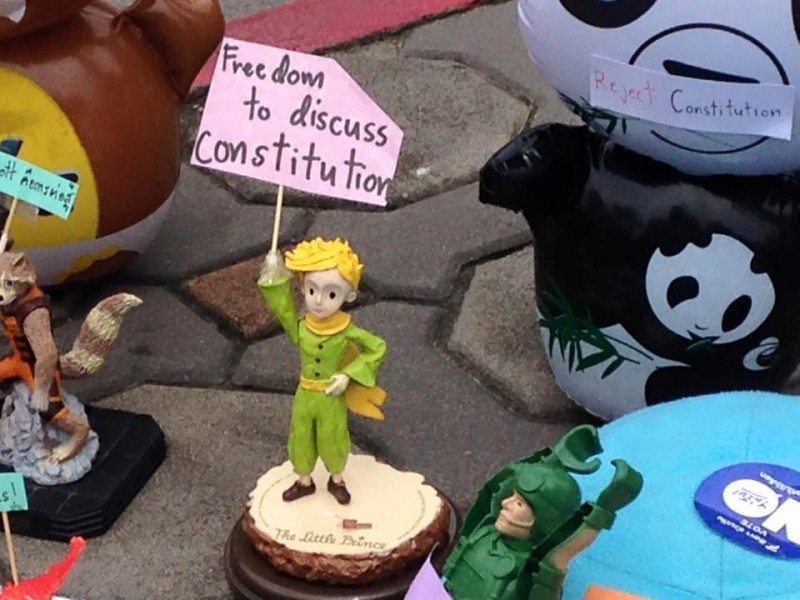 The ‘Little Prince’ advocates the right of Thais to speak about the proposed charter and the referendum. Photo from the Facebook page of Liberal League of Thammasat for Democracy 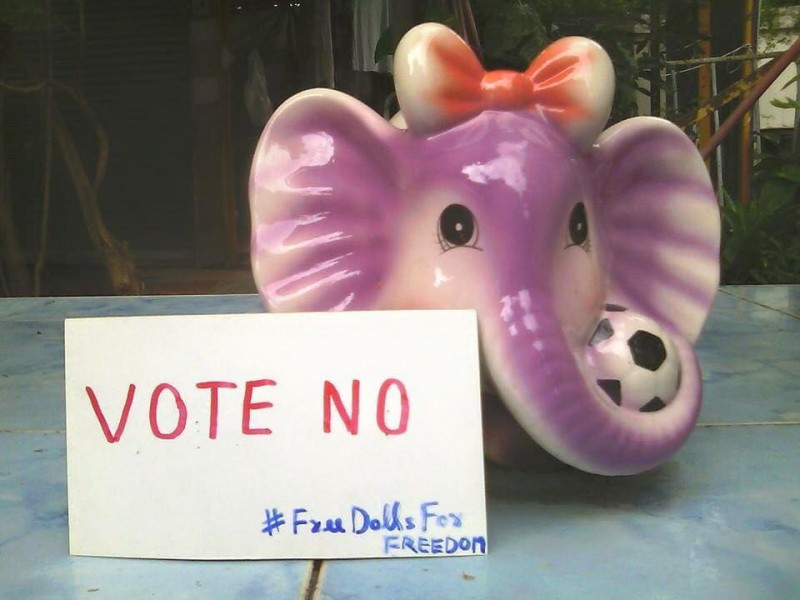