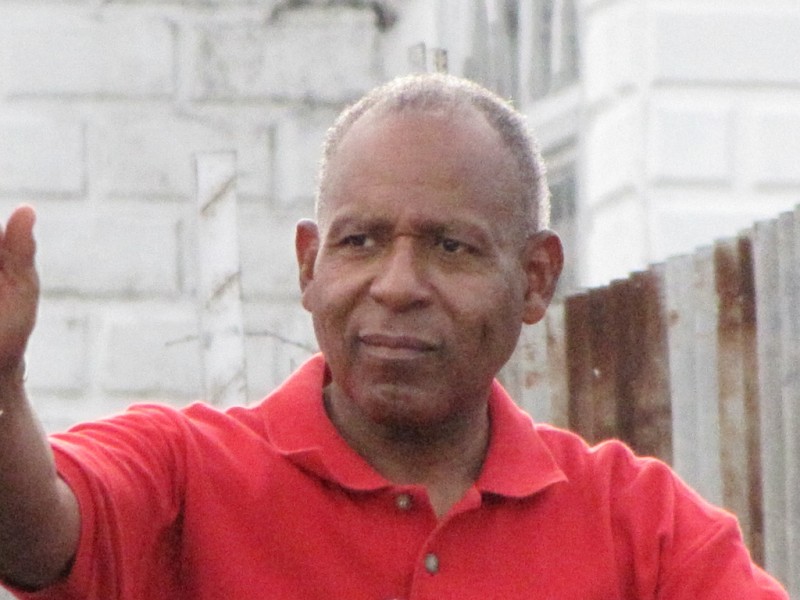 Patrick Manning thanking his constituents post-2010 election, which he and his party lost. Photo by Taran Rampersad, used under a CC BY-NC-SA 2.0 license.

On July 2, 2016, Trinidad and Tobago netizens woke up to the news that Patrick Manning, who served three terms as prime minister of the twin island republic, had died from acute myeloid leukemia. His wife had publicly shared his diagnosis just the day before, asking people to pray for him as he began cancer treatment. No-one expected Manning to pass away so quickly; his family made the announcement on his official Facebook page:

At 8:15AM today, Former Prime Minister Patrick Augustus Mervyn Manning passed away peacefully at the San Fernando General Hospital after battling Acute Myeloid Leukemia. Former Prime Minister Manning was surrounded by his family and loved ones.
The Manning family would like to thank everyone for their prayers, love and support during this trying time.
Funeral arrangements will be announced in due course.

In the blogosphere and on social and mainstream media, tributes to Manning soon began. The popular politics and sports website, Wired868, republished a statement by Stuart Young, a minister of parliament and the public relations officer for the People’s National Movement, the party which Manning led (and which is currently in government):

On behalf of the members […] and […] the Executive of the PNM, I take the opportunity to express our sincerest and heartfelt condolences to Ms Hazel Manning, her sons and Mr Manning’s wider family.

Mr Manning served Trinidad and Tobago for decades as a leader with great vision and his passing is a loss to the Nation and to his party, the PNM.

The current leader of the opposition, Kamla Persad-Bissessar, also paid her respects to Manning, despite the fact that they had been bitter political rivals:

It is with deep sadness that we heard of the passing of former Prime Minister Patrick Manning.

On behalf all in the Parliamentary Opposition and the United National Congress [the current opposition party], we send our heartfelt sympathies and prayers […]

Indeed, his wife Hazel has always exemplified strength and fortitude in her family, something which was clear throughout their public life.

The grief we share at his passing is, without doubt, grief that will be shared by our fellow nations in the region.

We wish the Mannings God's guidance and support and pray that the former Prime Minister will find a place of joy and rest.

A most memorable line, ‘Patrick, we stepping up with you’. Thanks for the service and thanks to the Manning family for allowing our former Prime Minister and Political Leader to serve. Rest in peace, Mr. Patrick Manning.

Some of Manning's regional peers remembered him as “a sincere advocate for regional integration”.

On Twitter, users remembered Manning's repartee on the electoral campaign trail as well as his eloquence in public speaking:

"Our people will be at the center of all development, without people my Dear friends there can be no development…" – Patrick Manning

Sad day for CARICOM.Former PM Patrick Manning,one of its true champions has fallen.His contribution in health&security will not be forgotten

Netizens also shared their feelings on Facebook. Trinidadian Michael Cherrie called Manning “one of the most courageous and complex leaders of our nation's history”, while Mollineau Chin Ashram noted that he was “a man that paved a political foundation for us.” Marsha Gomes-Mckie was appreciative of a visionary leader:

He loved his country, at times more than it loved him. Every time i see how the waterfront looks i will remember his vision for development. He is gone now and words are no longer useful. I send condolences to his family. May he live on in you. #PatrickManning #RIP Patrick Manning

This is not to say that Manning's tenure was without controversy. His administration was accused of corruption via the construction of the very same waterfront high-rise project, which eventually cost taxpayers billions of Trinidad and Tobago dollars (6.6 TTD = 1 USD). Many citizens also felt that he sometimes attempted to muzzle criticism against him and his government — and he received a lot of criticism over his plans for an aluminium smelter plant, the millions of dollars that were spent on the “monstrous” prime minister's residence and his refusal to include cultural stakeholders in the process of erecting the National Academy for the Performing Arts (NAPA), which is, at present, undergoing expensive remedial work to deal with issues related to its design and construction. NAPA — like many of the “megaprojects” undertaken during Manning's leadership — were increasingly awarded to foreign contractors.

Against that backdrop, Facebook user Sylvan Pardassie was amused at the outpouring on social media:

See all the HYPOCRITE coming out NOW…..Patrick manning Dead
Lets be real T&T if the man was bad and evil all the time he cannot be good and a saint NOW…….

RIP Mr. Patrick Manning. At this time it doesn't matter about Party Politics, the nation will morn the loss of another extraordinary man.