The ‘Achievement Epidemic’ in Vietnam Schools 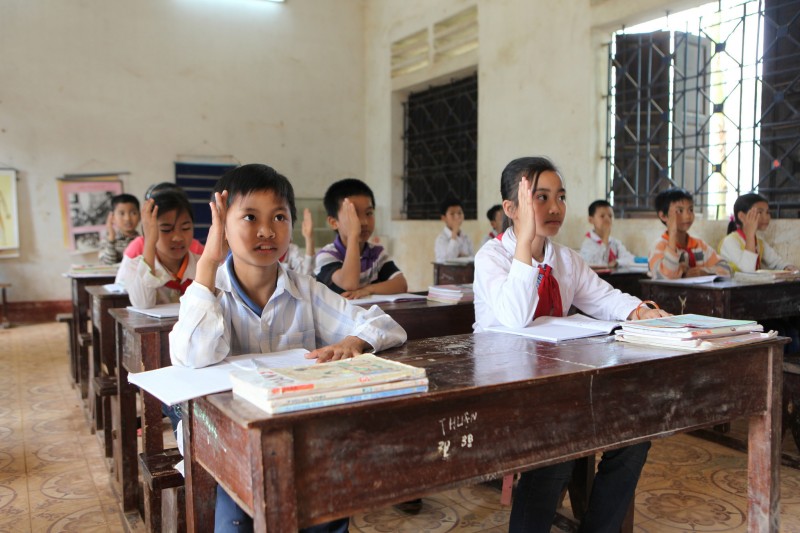 This article by Nguyễn Linh Chi is from Loa, an independent news website and podcast that broadcasts stories about Vietnam. It is republished by Global Voices as part of a content-sharing agreement.

The sound of cicada. The vibrant red color of the Flamboyant Trees’ blossoms. These are the distinctive signs of summer in Vietnam, as well as exam season. It is the most important time in a student’s life: The high school graduation test also determines college admission.

Vietnam’s first university, Văn Miếu Quốc Tử Giám or the Temple of Literature in Hà Nội, is humming with activity this time of the year. Students come here to pray for good luck before the big exam. Families make generous donations to the temple in hopes it will bring blessings to their children.

“My parents want me to get into college so I can have a brighter future,” says 17-year-old Đỗ Mai from Hà Nam province, south of Hanoi, one of the high school students taking the big test this year. Her dad is a retired soldier, her mom is a rice farmer. Mai applied to college this year with the hope of furthering her education, as well as making her parents proud.

She recalls distinctively what her mom once said to her:

A couple of years ago, my mom told me after a long day of working in the rice paddies: ‘You got to study really hard so you don’t have to do this kind of intensive field labor like me. Chances are in a couple of years, we won’t even have the rice paddies anymore. They are industrializing everything. Once they open factories here we will lose our paddies.’

This year, about 600,000 youths have registered their intent to go to college, in a country that has a little more than 400 accredited institutions. The shortage of university slots has made a rigorous testing system all the more competitive. Students are tested on a minimum of four subjects: math, literature, and English are mandatory. The fourth subject can be freely chosen from biology, chemistry, geography, history, and physics.

“I’m worried the most about English because I find it very boring to study,” Mai says. “But it is a mandatory subject so I’m worried.”

According to the Ministry of Education, the exam format this year will be similar to that of previous years: 60 percent of the material is considered “easy”, designed so students who only wish to graduate from high school can do well just by demonstrating their basic understanding of the lessons, while the other 40 percent of the test is made more difficult to challenge college candidates and categorize student levels.

Once the exam scores are announced, students can start registering for their college of choice. Based on the number of applicants and their performance, schools will then determine the accepted test scores.

Mai says if her results allow, she would like to study to become a preschool teacher.

They said I was good with kids since I was in sixth, seventh grade, so I should study to become a preschool teacher,” she explains. “They also said teaching jobs are among the harder ones to find after college, and it’s going to be a challenge dealing with upset children. But I made the decision to go with it anyway.

The preschool education program Mai chose is a highly competitive one. There were reportedly more than 15,000 applications to Hà Nội’s National College of Education in 2011, but the school only accepts 1,800 students a year. That’s a 12 percent acceptance rate, which is even more competitive than any Ivy League schools’ in America. Mai would have to score exceptionally well in order to make it to her desired program. And even if she completes her teaching degree, she may not find a job in the field she trained for. In 2013, the Education Ministry paused the teaching program due to “a sign of mismatch between supply and demand.”

According to Vietnamnet News, many graduates who have a teaching degree report that they can’t find jobs, so they have had to switch industries and explore jobs in different fields.

Bùi Văn Thuận, a chemistry teacher at the private high school Bình Minh in Hà Nội, says that mismatch points to another problem with Việt Nam’s education system: the lack of vocational schools for students.

I think families’ expectations and the career guidance given to students are unrealistic and not that helpful. There are many students out there who are talented in many skilled areas, mechanical for example. They could take a two-year training program on that specific skill, be excellent at it and graduate with a practical degree. But instead, they feel they must go to college. As a result, students may not study what they are truly interested in or passionate about.

Thuận says Vietnamese youths are under a lot of pressure as they are often taught that going to college is the only path to succeed in life. The nationwide exam takes place only once a year, so they can’t afford to disappoint their parents. He says the so-called “achievement disease” among parents is what has made the college admissions process become so stressful:

Vietnamese care a lot about reputation. If the neighbor’s kids get into college, they feel the pressure that their children have to make it too in order to not lose face. This is why many parents are more stressed out about the exams than the students themselves.

To make it easier on the kids, some parents have resorted to unethical practices to heighten his or her scores, so much so that it has now become part of the exam ritual, says Thuận. Before the test, many high schools hold meetings to collect what is called an “exam fee” from parents. In reality, this fee is used to bribe test proctors so they could be more lenient with monitoring students.

At the low end, 200,000 đồng equate to just about 10 US dollars, but the benefit is mutual: proctors earn extra income, parents feel more secure that their children have a better chance of scoring high in the exam, and the school gets to maintain high graduation pass rates on their students. Due to this practice, cheating has become common at high school graduation exams. A survey by Thanh Niên news found that, almost 85 percent of students acknowledged seeing rampant cheating on high school graduation exams – and Vietnamese educators say the findings come as no surprise. Thuận says:

After the exams, the entire school becomes white, covered with used cheat sheets. Students litter them in the school yard after they are done. Under the current exam system, the pass rate would only be about 40 percent at most if proctors monitored students closely.

This year the Education Ministry has come out with new measures to reduce cheating. Students who cheat will not be allowed to proceed with the rest of the exam and the next subjects. Mai says it is a risk she won’t take:

Cheating has a negative impact on me. If I’m caught, they will make the cheat subject zero, so I won’t be able to graduate from high school, and ultimately, I can’t go to college.

Mai says if she doesn’t make it to college, she will look into other career options such as getting a certification for a desk job, or even learning to become a seamstress.

The big exam is only a couple of days away. She tells herself: “Study harder! I’ll make my dream come true and move toward my future!”

One thing she is sure of is that she will not be a farmer like her mom.