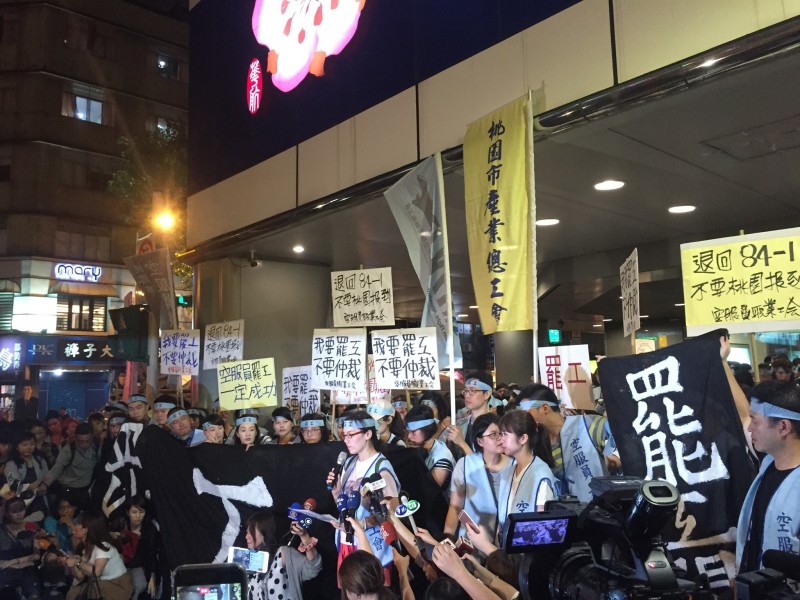 For the first time in its history, Taiwan witnessed a strike within the airline industry on June 24. Several thousand China Airlines (CAL) flight attendants protesting against a change to their working conditions first rallied in front of the Taipei branch headquarters. The strike then dramatically developed into an occupation of Nanjing East Road in the city center. The action resulted in the cancellation of 122 flights on Friday and Saturday; around 10,000 passengers were affected.

The strike came to an end the same day, with CAL flight attendants winning important concessions from the airline. And their success hasn't gone unnoticed by workers in other sectors in Taiwan.

By cutting their working hours, the company can squeeze more flights into flight attendants’ schedules without giving them full rest time between flights. In other words, the change exploits flight attendants’ rest time. In addition, a new contract that the airline requested them to sign recently extended their working hours from 174 hours per month to 220 hours per month.

The tension between the airline workers and the Taiwanese government-dominated enterprise has been escalating for many years. The company has been criticized for extremely long work hours and low pay on holiday shifts.

Smaller-scale demonstrations have taken place in the past two years. In September 2014, some flight attendants protested against the increased number of red-eye flights and the reduced number of flight attendants on each flight. In response, airline management issued a warning to them for protesting and suggested that they raise the issue in negotiations instead of protesting.

In January 2015, CAL’s workers protested again for their salary and bonus. The airline management did not respond to their request, but they penalized protesting flight attendants by transferring their job to customer service and forcing them to be re-trained.

After a huge CAL labor protest at the end of May 2016, CAL management proceeded to fire two members of the technicians’ union. At the same time, the union of flight attendants decided to vote for a strike that could force the airline management to take them seriously. This time, 2,535 out of the 2,638 members of the CAL flight attendants union voted in support of the strike.

After a five-hour negotiation, the company, under pressure from the government, agreed to restore the previous working hour calculation policy, consult with worker representatives on policy changes in the future, ensure sufficient holidays, and increase the flight attendants’ daily allowance at the destination location. The strike ended in the late evening on June 24.

On Facebook, one of the protesting flight attendants said:

Today the staff of CAL are exploited by management, and this is just one of the cases that labor face every day in Taiwan. The GDP growth of Taiwan is positive almost every year, has your salary been raised? […]

Even when the companies earn a lot of money, the hourly paid workers only earn the minimum salary, and the boss only pays you almost the same salary. The rest of the money always goes into their pockets.

Social resources are monopolized by the big companies, and the relationship between the workers and management is less and less balanced. No wonder young people cannot see a future, because they are doomed to be losers no matter how hard they work.

Therefore, let us fire the first gunshot of this revolution.

‘No one in any occupation should work like a slave’

The actions of CAL's management that triggered the strike didn't happen in a vacuum. Recently, Taiwan's business community has been lobbying legislators to introduce new revisions to the Labor Standards Act that would strip the government of their power to protect employees regarding their working hours and allow companies to extend workers’ schedules as long as they wish.

In a public hearing on working hours in Taiwan's Legislative Yuan on June 21, the executive director of the General Chamber of Commerce, an organization representing the interests of businesses, suggested that the upper limit of overtime should be extended to 60 hours per month because “it is good for the health and income of workers”.

If the business community continues with its push to extend working hours, it wouldn't be surprising if they encounter more and more opposition from their employees, especially on the heels of the CAL flight attendants’ success. In fact, the flight attendants’ strike has inspired workers from other sectors to reflect upon their labor rights and contemplate future collective action action to improve their working conditions.

The perception of flight attendants is always young, beautiful, good language skills, etc., those ‘petit bourgeois’ characters.[…] Today the CAL flight attendants wrote a new page in the history of strikes in Taiwan. I hope this success will not be limited to this class of workers, and this success could be extended to other less beautiful, less young, and less advantageous classes.

Health care workers in Taiwan have complained about their working conditions for years, but have a uniquely difficult time going on strike. Legally, management must approve their strike; any other action would be considered illegitimate. The law is made to protect patients, but more and more medical staff argue that their labor rights are aligned with patients’ interest. Vicky Lin, a nurse, said:

I heard people ask who should take responsibility if patients die when nurses strike.
What I want to ask is why should medical staff take the responsibility for the errors that they make when they are too tired due to overtime? Do we have a choice to leave our job on time? No! Therefore, why should we be sued for these kind of errors!?

The flight attendants’ strike has served as a kind of wake-up call for Taiwanese workers in other sectors that the proposed revision to the Labor Standards Act might affect them. Legislators who had signed on the revision are now under pressure due to what happened with this strike. Feeling that their interests are threatened by the success of flight attendants’ labor action, on June 27 the business community decided to suspend all negotiations with the government and workers regarding further legislation on public holidays and working hours.