Even Assad Supporters Aren't Immune to Syria's Kings of Looting 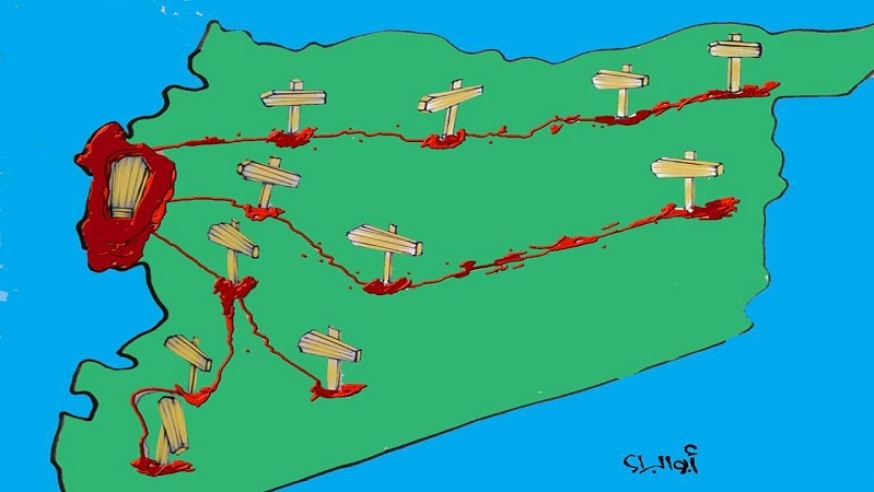 [Image: Drawing by Abi al-Bara’ shows the map of Syria as a road signaled by coffins leading to the coast. (Source: The Cry (as-Sarkhah)’s Facebook page)].

This story was originally written for Syria Untold in Arabic byʿAlia Ahmad, translated by Maya Milani and edited by Andrea Glioti. It is republished here as a partnership agreement.

A small stroll in loyalist neighborhoods in the Syrian cities of Jableh and Latakia will tell you that not all regime supporters are the same. Talks of “banal death”, “corruption”, “war profiteers” and “price peaks” are no longer confined to private spheres. You now hear it at the grocery store, on public transport and from passers-by on the streets.

An undeclared conflict of interests has split regime supporters into various groups. The community is split between benefiters of the status quo, backed by influential groups, and everyone else. The benefiters carry out “thuggish” (tashbihiyyah) abuses against harmless regime supporters, who do not dare to assert their basic rights.

“A new mobile phone model shakes me into action and occupies me more than the news of the death of someone I know,” said Nader, a techie college student, to describe how he relates to the numerous daily casualties around him.

“I don’t think of tomorrow. I live my day with minimum damage possible. I wait for the beginning of each month to collect the pension of my recently deceased mother, although it doesn’t even cover a quarter of my needs, and so days wipe out days.”

On the other end of the government supporters’ spectrum there is Wasim, an ex-telecommunication professional in his thirties, and a current member of the National Defense Forces (NDF). “I hope the crisis lasts for years. I got my back watched (by influential people) and no one can mess with me. I go on a stroll on the Latakia-Aleppo highway with my guys and they take whatever they want and no one dares to speak out or object. I now have several houses and cars,” flaunts Wasim.

He pauses for a few seconds, then continues loudly, as if to justify himself: “In this war I have lost my brother and by nephew and I have the right to make up for it!”

Some joined the pro-government militias to earn a decent salary, or to avoid being dispatched to remote regions. “I finished my studies at the industrial institute and I was to be drafted, so I had no choice other than joining the NDF, where the wage is better than with the army [30.000 SYP (roughly 58 USD) in comparison with 15.000 SYP (29 USD), although the army salary is inclusive of some clothes, room and board],” said Muhammad, another NDF fighter, “and I am serving in the Latakia countryside, so I get the chance to see my girlfriend and family once a week, which would be impossible in the army.”

Wasim, who became rich thanks to the same paramilitary group, takes a few more puffs of his cigarette, then continues: “The NDF is more like a gang forced upon me by circumstances. Actually it is a war gang of the worst type. Its leadership comprises the most dangerous criminals in the coast, who used to run illegal activities before the war. Those activities increased and spread out like a cancer in the last few years. Everything has a price for them.”

Regime militia members exploit their presence at checkpoints to extort tolls from drivers, and blackmail anyone whose ID points to an area out of government control.

They are also the kings of “de-furnishing” (taʿfish), which is the term used to describe furniture thefts from the houses of those who have been displaced as a result of military action. NDF member Muhammad commented ironically that their excuse is that those are “war spoils” (ghana’im) they have earned through their efforts to defend the homeland against the enemy.

He explained that the thefts reach even the houses of people living in regime-controlled Latakia and its devastated countryside. In these areas “the defender is the thief,” concluded Muhammad.

Death and its many explanations

“People of the coast are the regime’s human repository in this war, like embers they burn quietly beneath the ashes of this grinding war,” this is how Mahmud describes the situation. He works as a private tutor. He has intentionally not completed his college education to postpone the military draft.

He adds: “It is no secret that some consider death an honor and take pride in it, seeking it in battle fields all over Syrian soil. On the other hand, there are those who find themselves forced into taking part in this filthy war without belonging to any side.”

“Patriotic” ideologies control the minds and hearts of many of those who consider death a duty in the defense of the homeland. The violations committed by some opposition groups, or their extremism, become a pretext to convince themselves that defending the regime despite all its faults is the guarantee for the lives of their families.

Umm Ahmad is more than 70 years old. She lost four of her seven sons in the past five years. The old woman tearfully says: “ We must all sacrifice in self-defense so that we can survive. Of course the price will be very high, and I don’t mind losing my other three sons.”

Her husband Abu Ahmad agrees on that, even though he clearly expresses his rejection of the regime’s management of the crisis: “The traitors and the corrupt should have been held accountable. Those who handed over areas to the armed (opposition) men in return for money have not been tried for that. I lost one of my sons in the at-Tabqa airport battle (August 2014) and until today there is no official regime account that explains to us what happened there.”

On the other hand, Umm ʿAli, a woman in her sixties, takes a very different stance. After losing her middle son in the war, she says: “I am not willing to send my youngest to the military. I cannot imagine losing another son, come hell or high waters. My son never leaves the village in fear that his name might be called on for the draft, so he only leaves (home) to help his father work in the orange grove.“

Many changes have almost radically affected the stance of lots of regime supporters. Corruption has spread to an undeniably obvious extent and those who were desperately defending the regime and its symbols have been directly or indirectly subjected to an injustice that made them reconsider their stance.

Shadiah, an employee in her thirties, commented on this point saying: “In the beginning there was a majority of enthusiasts willing to sacrifice their lives for the sake of the homeland and its leader. In every heated debate, any critic of regime practices was considered a traitor. […] The apologists used the opposition’s silence against violations committed in the name of the revolution as an excuse to undermine the values and credibility of the revolution.”

Today, after five years, according to Shadiah, the vehement defense of the regime “has disappeared for many who suffered unjustified abuses, while it has remained frequent in individual instances. Nonetheless, the absence of the spirit of citizenship and the lack of respect for the human individual have left each person alone with their suffering.”

Having said that, the grievances of the “loyalist areas” from the war are not limited to the abuses committed by the regime and its militias. Car bombs, mortar shelling and the daily arrival of the corpses from battlefronts give the locals a taste of the Syrian tragedy as other Syrians have experienced it. Today numerous government supporters feel trapped between both sides.

This article was prepared inside Syria through direct interviews in the cities of Latakia and Jableh. Pseudonyms have been used to protect the sources.