Here's What Macedonia's Colorful Revolutionaries, Armed With Paint, Have Achieved So Far 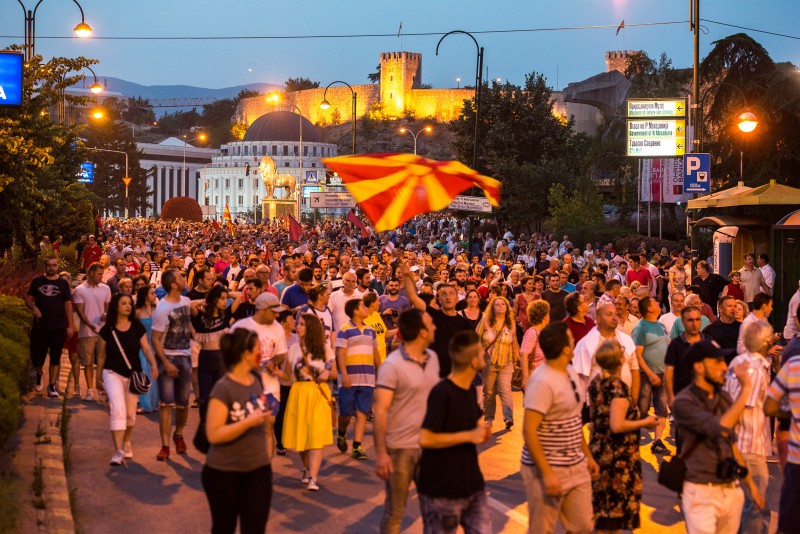 Two major demands have been met since protesters started coming out on the streets of Macedonian cities ten weeks ago: a presidential blank pardon to regime politicians has been withdrawn and the government planned ‘one-party’ elections — which only featured their party — have been cancelled.

Despite threats from the regime that criminal charges will be brought against them, the protesters are holding their ground and continuing to push for reform. They want the ruling coalition of VMRO-DPMNE and DUI out.

The anti-corruption protests in the tiny Balkan land-locked country — dubbed the ‘Colorful Revolution’ — are non-violent, include marches, performances, and lots of color. Armed with paint buckets and water guns, protesters have been splashing paint on structures that symbolize the impunity and poor governance of the ruling regime.

The nonviolent movement adopted the name Colorful Revolution, because of the paint and the diversity of the protesters. The movement includes civil society activists, members of the political opposition (from the center, the left and the right), and many politically-unaffiliated citizens from all ethnic backgrounds. The diverse mix of Macedonian citizens are united in their outrage over abuse of power within state institutions.

The pardon that opened a can of paint

The protests started on April 12, when President Ivanov pardoned all those charged and under investigation, by the newly-established Special Public Prosecutor Office, in a wiretapping scandal that targeted members of the country's opposition.

Within a month, the protests spread to 22 cities across Macedonia. In some cities, like Skopje and Bitola, they included almost daily marches and painting. In smaller cities, they were less frequent, but still numerous. During June, other forms of protests were also used, including blockades of crossroads, and protest performances. 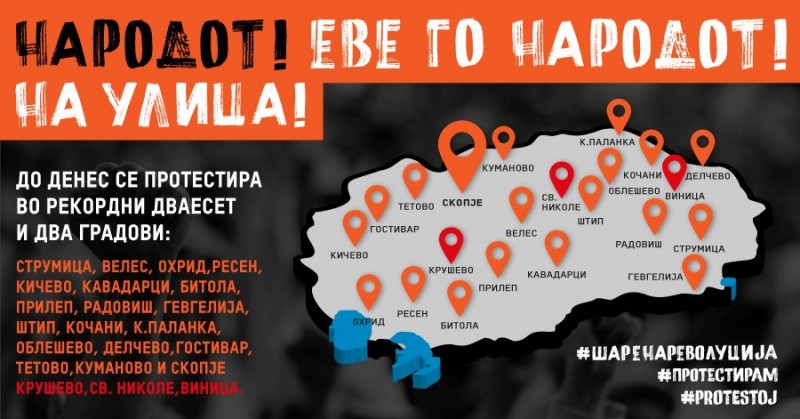 Paint is splashed across the State Election Commission

The government of Republic of Macedonia canceled its plan to hold an early election with participation of only the ruling party in June, fulfilling one of the eight demands of the protest movement. The process showed that the combined pressure from the people in the streets, and the other domestic and international factors, can bring about change even within very adverse circumstances.

Initially, the State Election Commission (SEC), where ruling parties appointees hold majority, approved the elections on April 16, even though its task to clean the voting registry from phantom voters had not been done. Back then, the SEC estimated that the starting price tag for these elections would have been EUR 7.5 Million (USD 8.34 Million) for their basic expenses.

On May 4, the ‘Colorful Revolution’ protest march in Skopje visited the seat of the SEC. Thousands of people marched behind the banner “Dictatorial Electoral Crime!”, and then the protesters lighted flares, and threw paint on the facade of the building. 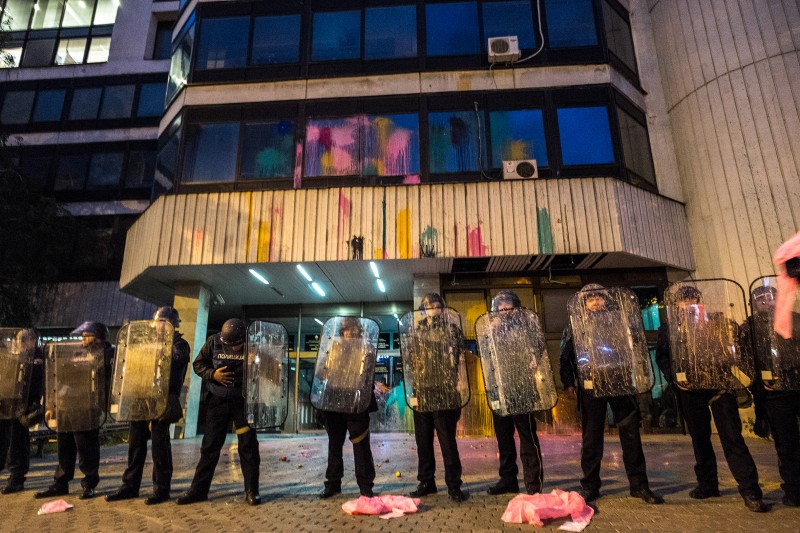 The State Election Office after the ‘Colorful Revolution’ protest on May 4, 2016. Photo by Vančo Džambaski, CC BY-NC-SA.

Considering that the basic conditions for the elections to be free and fair are not fulfilled, the protesters, the civil society organizations like election observers MOST, the international community, foreign analysts, the political parties in the opposition and also within ruling coalition all took position that such elections should not take place.

Attempting to maintain his image of invincibility, the ruling party chief Nikola Gruevski claimed that the one-party elections will take place on June 5, and then, after his party wins, he would also organize new elections with more parties.

Lack of pluralism brought back memories of communism, and further mobilized the ‘undecided.’ Some remembered that in the leaked wiretaps, the Parliament Speaker Trajko Veljanoski defined “democracy” as a state when all MPs are from his party. Others re-shared an interview with the president from 2013 in which Gjorge Ivanov praised the unchanging stability resulting from Chinese Communism.

“I see, finally we get an efficient Parliament” – a much shared 2009 “Pecko” cartoon by Darko Markovikj, who died on June 9, 2016. Protesters dedicated a march to his memory.

However, as daily street protests and other forms of influence continued, the VMRO-DPMNE backed down and canceled this plan through its apparatchiks in the state institutions. Тhe Constitutional Court annulled Parliament Dissolution and the reconvened Parliament postponed the elections without setting a new date.

In the aftermath of this decision, the Parliament also appointed new ministers from the ruling party, replacing opposition “caretaker” heads of the Ministry of Interior and Ministry of Labor and Social Policy. The ruling party politicians took a number of measures, including repeated detention of protesters, which have been interpreted as attempts to maintain the rule of fear. High ruling party officials and pro-government media stepped up their campaign against the protesters, targeting them with defamatory accusations of being foreign mercenaries.

Protesters again paint the Ministry of Justice, while the citizens chant: “Down with Dictatorship!”

But after weeks of stalling and bickering, the president actually revoked his decision for blank pardons of the persons under investigation by the Special Prosecutors Office on June 6.

There was no explanation why his list of preemptively pardoned people included some who had not been suspects in the  investigations. One such person, Kosta Krpach, was found dead in his apartment in Skopje, with two bullet wounds in his chest. The SPO informed the public that he was in fact a volunteer witness who had been receiving threats. After several weeks of investigation, the (non-special) Public Prosecutor Office declared that the case as “a suicide.”

After the revocation of the pardons, the protesters focused on two of their remaining demands. In order to prevent any new legalistic obstacles to the work of the Special Prosecutors’ Office, they demand from the Constitutional Court to issue a decision about the SPO's legality.

The Special Prosecutor Office was established as part of the Przhino Agreement, brokered by the EU and the US, at invitation of Macedonian political actors. International community involvement is based on the long term consensus that the country's strategic goal is to join the EU and NATO. While working towards the same goals, the protesters are also not shy of criticizing the all other stakeholders,  by issuing demands for allowing civil society monitoring of the negotiations in order to prevent backroom deals.

The second urgent demand is stopping police harassment of the protesters. Some of the more visible protesters have been singled out and subjected to repeated short-term detention, invitations for questioning in police stations, spectacular arrests, and house arrests. Often, such acts incite further, spontaneous protests.

During the second half of June, protests continued less frequently but with higher concentration. On June 20, over 25,000 people gathered in the center of Skopje to reiterate the demands of the Colorful Revolution. A week later, on the next organized protest in the capital, several thousands people showed up again.