The Uncertain Future of the Syrian Revolution 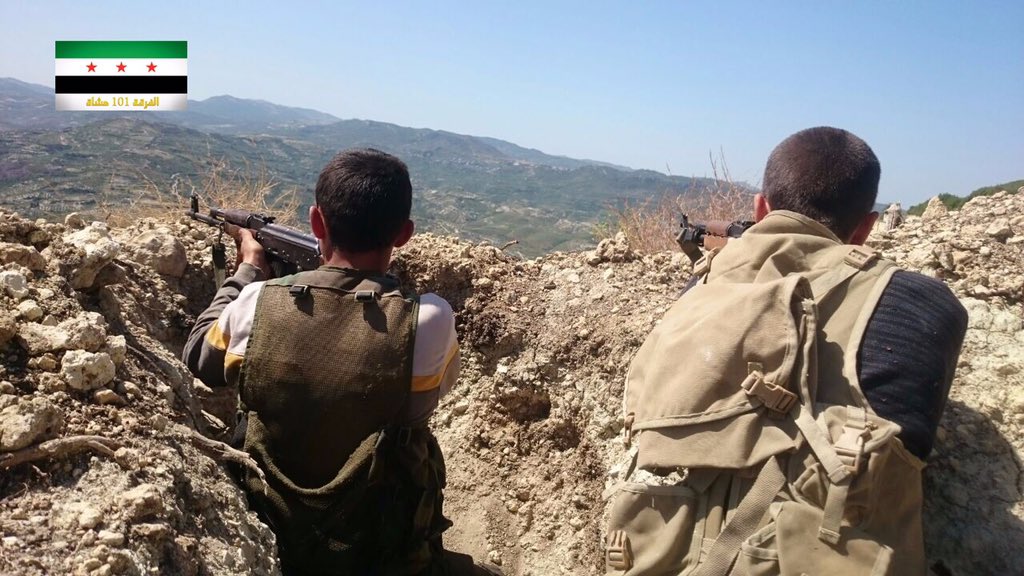 Fighters from the 101st Infantry Division. Picture used with permission from the Division's media office.

The Syrian Regime is willing to remain in its current position for years, as long as it does not pay for this time with the blood of its own fighters, but rather with that of foreign militias and Syrian loyalists whose lives are worthless to the Regime. Most often, the Regime pushes forcefully enlisted fresh recruits to their front lines, as sacrificial lambs, while wearing down the Free Syrian Army (FSA) with daily shelling, killing its finest fighters and media activists who are the well-known targets on the front lines.

The Regime has no problem with continuing in the current situation, as long as the loyal coastal cities and the capital remain under its control, as every day its enemies turn into friends and allies. Washington has shifted its prompt calls for Assad's overthrow to fighting terrorism, while its military operations moved to Pentagon to fight Daesh (ISIS) alone. The tactic is to fight and defeat FSA divisions one by one in order to create new units supported by the Pentagon to fight Daesh in Deir al-Zour and Northern rural areas of Syria. Other units seek to join the Pentagon program to receive extra funding in exchange for sending troops daily to fight Daesh, in what seems to be a failed strategy with no significant  advances on defeating the extremist organization for over a year now.

With the increasing influence of the Kurdish and Syrian Democratic Forces in the north and their attempts to take leadership of Rojava (Syrian Kurdistan Province) by controlling the cities of Manbij and Jarabulus, there will be new fronts for FSA to defend against such attempts to appropriate Syrian territory. This pits the FSA against the Syrian Regime, Daesh and the Syrian Democratic Forces, not to mention the back-stabbing by Islamic battalions close by. So, what will the FSA do?

We no longer hear of great battles led by the FSA, but rather about limited clashes and attrition battles with the Islamist factions designed to protect and strengthen some areas, or to regain control over areas dominated by the Regime or Daesh. The battles for Hama and Aleppo have yet started. As for Al Raqqa’s, if that happens it will not be a piece of cake for the FSA, as such a battle will be under the US and Russia, with a possible participation by the Regime, which would give it a clear pathway towards Tabqa airport and Palmyra. Thus the Syrian Democratic Forces and Assad’s army (with coalition and Russian Air Force support) will be the key players.

The FSA maintained its positions in the north through some of its factions, which are now static, drowning in the swamp of external aid. Other factions are going about their business as they reinforce their control and power over their areas. They have begun to establish relief societies, schools and bakeries, thereby turning into yet another battalion working in relief and commerce without being able to reach the point of self-funding that would enable them to cut the cord of external support and achieve independence and triumph.

The FSA now enjoys relatively easy movement in northern Syria without being under siege, as is the case in Homs city or Eastern Ghouta in Damascus. However, despite this freedom of movement over large areas, the FSA is caged within the boundaries of international red lines which can’t be crossed. “Nubl and Al-Zahraa” is a red line. “Al-Fu'ah & Kafriya” is a red line. Coastal areas are a red line. People Protection Units areas are a red line. Crossing these lines could result in attacks, possibly from the very parties supporting the FSA.

In Southern Syria, in Daraa province, the FSA military operations have been on hold for nearly a year, except for several battles against Daesh divisions. The FSA lost its momentum in rural areas of Damascus and Ghouta. It is fighting alone and under siege against al-Qaeda, its eternal enemy, in addition to defending the large fronts with the Regime to prevent any advancement. And it is unable to break this siege whether in Darya, Ghouta or rural Homs as it has been left alone in these areas without any back-up or support.

The main purpose behind containing the opposition in the Geneva talks for eight months was to force the FSA to stop fighting and drain its support while continuously arming and fortifying Regime areas. The alleged truce is proof of this. It was imposed by Russia and the US on parties in Syria and included demands to constantly fight against Daesh and Al Nusra Front, while giving legitimacy to aerial bombardment closing in onto FSA controlled areas, and validity to the presence of Hezbollah, Iranian and Iraqi militias by including them as parties to the truce. The aim is to create dissent and send a threatening message to the FSA through the use of internationally prohibited weapons like phosphorus and cluster bombs, which gives the green light for Russia and Assad to wipe out any area they want while the US and Europe turn a blind eye.

Hardly a week goes by without a prominent activist, leader, commander or lead fighter being assassinated, as part of a systematic strategy to cause the failure of the revolution’s work. These incidents go unnoticed and their perpetrators are not held accountable as they occur far “away from home”. But what some FSA officials do not realize is that the day will come when it will be them, or one of their own, who is assassinated.

The Future of the Free Syrian Army

If the FSA continues on its current path, as the tool of forces with external agendas (whether or not these align with the FSA’s projects), it will enter into a maelstrom without a end. The FSA will be the party that causes Syria to be divided, and the Kurds to establish a state of their own in Syria. The FSA will help the restructuring of the Regime's army, and the destruction of Syria under the pretext of the “war on terrorism”. Opposition activists will be placed under surveillance and scrutiny by the next regime, which will not include the FSA, nor revolution figures, and which will expel tens of thousands of families from the country, just like in 1982 after Hafez al-Assad's war on the Muslim Brotherhood in the city of Hama.

If the FSA does not act like an internationally powerful force with ownership of a leading project in Syria, it will be out of the equation and will lose its place to civil society organizations, with their dubious role in the Syrian revolution, and to fake opposition characters who are working to give Assad’s Regime a new look.

The FSA will be held accountable not only for what it has done, but also for what it should have done when the need arose. FSA leaders residing in Turkey, Jordan, and Europe are ready to give up certain of their battles, and even the basics and fundamentals of the revolution, in order to strengthen international relationships that support their current authority and give them hope for the future. If the FSA’s on-the-ground soldiers had dismissed their leaders, renounced external support and returned to the principles of the revolution as it was in 2012, when the FSA would self-arm from the gains of successful battles against the Regime, the situation would have been much better for the fighters, despite the fragmentation of loyalties.

The decision of the FSA’s 101st Infantry Division, operating in northern Syria, to abandon international support that came at the price of silence regarding the administrative and financial corruption of their allies, is a first step towards demonstrating the possibility of returning to the revolution’s independence. But are other divisions willing to follow the example, or will they just carry on?