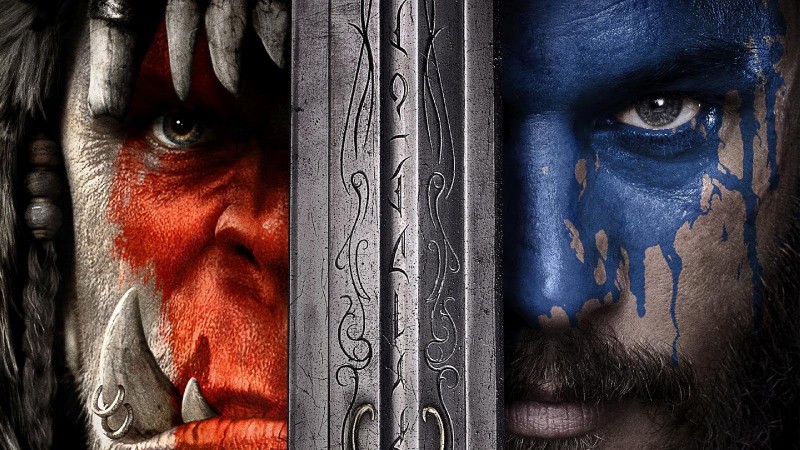 Warcraft, a Hollywood movie adapted from the famous multiplayer online game World of Warcraft (WoW), was released in China on June 8, and in the first five days, cumulative ticket sales reached $156 million there. In less than two weeks, the figure rose to $204 million. Meanwhile, in North America, the movie's debut weekend brought in about $24 million, and since its release has hit $44 million total. With global cumulative ticket sales at $412 million, that means China has contributed to about half of the movie's box office earnings. While the movie has been poorly ranked by western film critics, many wonder why it has surpassed other Hollywood movies in the Chinese market. The studio behind Warcraft, Legendary Entertainment, was acquired by Chinese conglomerate Dalian Wanda early this year. The local connection has helped the movie to develop marketing strategies that target the Chinese market and pull in a number of sponsors to boost ticket sales. A major strategy was to promote the movie as a kind of game festival for China's Warcraft generation to dress up or meet like-minded players.

‘This movie is about our youth’

Warcraft was first introduced in mainland China in 2005. At that time, Internet was having a profound affect on Chinese young people. Online video games were new and appealing, not only for the games themselves but also for the opportunity they represented to set up a virtual community and make friendships. The game was banned briefly in China in 2009, but hardcore fans still managed to find ways to access it. In a decade's time, China has become one of the biggest markets for Warcraft, with approximately two and a half million players. A lot of nostalgia surrounds the game for players who have been with Warcraft since it was first released. During the movie's premiere week, in addition to professional cosplayers (people who dress up in costume and play the role of a character) appearing in major cinemas, some Warcraft fans also organized festival-like gatherings with game props and costumes in theaters. One user of popular Chinese social media site Weibo, @novapang, received a free ticket from his company and dressed up for the occasion with friends: 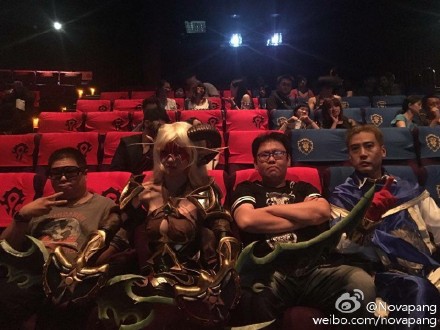 Another Weibo user, Xiao Di, reflected on the feelings of the Warcraft generation:

Sitting in the cinema, I was overwhelmed and almost cried. I started playing Warcraft in 2005 and was among the first group of players. I started as a silly preacher [a role in the game] and fought my way to the top. I made so many friends in the process. Although I lost contact with most of them, I am really thankful for their friendship — they helped in training my gaming skills […] It was a great time. But we have to change according to our age and that golden time will still have a place somewhere [in our memories].

Hardcore fans like @lucifer333 rebuked film critics and praised the movie for its nostalgia:

To those blind film critics who know nothing about Warcraft. Do you know what WoW is? Do you know how to play the game? Even if we are disappointed at the movie, it has presented a view of this universe. The director has spent much effort on that. This movie is about our youth, it is a nostalgic piece in which I see the grasslands where I ran around, the snowy mountain where I had my battles, the door of darkness that my team had run through. This is enough.

But some game players weren't so kind to the film. Mission 006 could not help expressing his disappointment:

Warcraft is worse than I imagined…After all, people went there to pay tribute to their youth spent playing video games. There are many characters in the film, like a big cosplay performance. For those who have never played the game, they would definitely lose track. The battle scenes are not grand. Needs to have a director who can handle a big production. Let's wait for the next one.

@sk-roro criticized that the film had failed the game:

Watched Warcraft: Can only see it as a cosplay show, the quality of the movie is unsatisfactory. The video game has such a grand story setting, but the film just only focuses on game gimmicks that appeal to the game fans. The storyline is scattered and flawed. I wish the next one is better as the game deserves a better movie. Or else why go to the cinema, let's just play the game.

Watched the movie and started arguing with my ex-gamemates after stepping out of the cinema. Of course, I miss the past […] the time when the only daily business is going online. I remember all the feelings — happy, angry, crazy feelings [when playing the game]. All these moments are real. But if you want to force me into saying that a movie which non-game players could not comprehend is a good movie, [my answer is] WTF!

Warcraft made 600 million RMB [$91 million] in two days — this has scared the Americans […] If we can make a film that earns 10 billion [$1.5 billion], then people from all over the world who study film will learn Chinese, instead of us learning English.

But while it certainly did well in ticket sales, some of its cinematic triumph was just hype, since the Warcraft movie also haunted by the phenomena of ghost screenings as a result of the large number of tickets pre-sold to corporations which financed or sponsored the film. Yoya-cc watched Warcraft with her boyfriend in one of the empty cinema halls and uploaded this photo to Weibo: 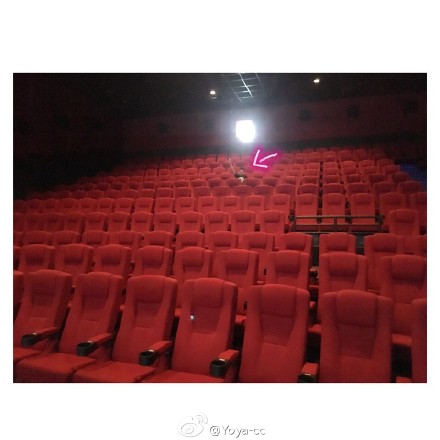 Ghost screening of the Warcraft. Image from Weibo.

This is a rare occasion. Just two of us in such big hall watching Warcraft. It reminded me of so many ghost stories about cinemas. My boyfriend said my photography skills are too poor and that he is barely visible in the photo. So I added an arrow to indicate where he was.