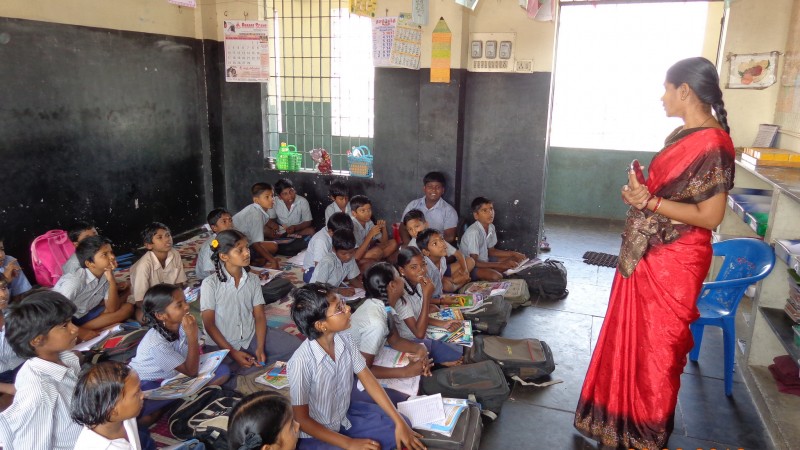 A Primary Education In Chennai, India. Image from Flickr by GlobalPartnership for Education. CC BY-NC-ND 2.0

The shortage of primary school teachers and facilities is a problem throughout India. According to a 2015 report, there was a shortage of 1.2 million teachers and almost half a million teaching posts were simply vacant. Recently, a citizen video depicting the teacher-shortage at a primary school in India's West Bengal prompted the authorities to install the required teachers.

The Right of Children to Free and Compulsory Education Act, a law passed in 2009, describes the modalities of the importance of free and compulsory education for children between six and 14 in India and sets a pupil-teacher ratio (PTR) of 30:1. A recent report by Oxfam found that 37 percent of the Indian government's primary schools lack adequate teachers due to insufficient funding, which in turn encourages students to drop out of school. More than 600,000 in-service teachers are untrained, Oxfam discovered, and—worse still—6,404 schools out of the approximate 760,000 primary schools in India do not have a teacher at all.

A few months ago, Soriya Banu (a community member of the international media and human rights organisation Video Volunteers) revealed that three teachers (including a temporary instructor and the principal) at a school in West Bengal each have to supervise roughly 200 children, varying from the ages of six to 12. According to the ratio mentioned in the Right to Education Act of 2009, the school needs at least five more teachers. Soriya writes:

Could the apathy towards the school be because only dalit and muslim children attend? One certainly hopes not. Yet the response from the Sub-Inspector of Schools sounds rather casual. “If the Head Master asks us for more teachers we will send him some from other schools.” Surely the Head Master has already made several such requests. And does this imply that other schools in the district are adequately staffed?

Below you can find Video Volunteers’ short film mentioned above.

Soriya went to several local administrative officers and showed them the video. Her efforts reached even Manas Chowbay, the school inspector from Kaliachak. He responded by sending a request to the chairman of region’s District Primary School Council, prompting the authorities to send a teacher to Uttar Dariyapur to fill the vacancy. Within six months of the report, the school got a permanent teacher and a head teacher, bringing the school's total faculty to four.

Akashi Tripathi writes about the reason for the teacher shortage in India:

The government run schools are reluctant towards filling up the vacant permanent posts of teachers for cutting up the costs. They do this by appointing teachers temporarily on an ‘ad hoc basis’. [..] By the time the ad hoc teachers understand the needs of the students, they have to leave their jobs in the same school or move to the next school. In a situation like this, teachers themselves also look for other opportunities which are more of a ‘permanent nature’ and when they can’t find them, they move in a different direction altogether.

The possibility of reaching state officials and winning some concessions on education appears to have become an inspiration for many throughout the country.