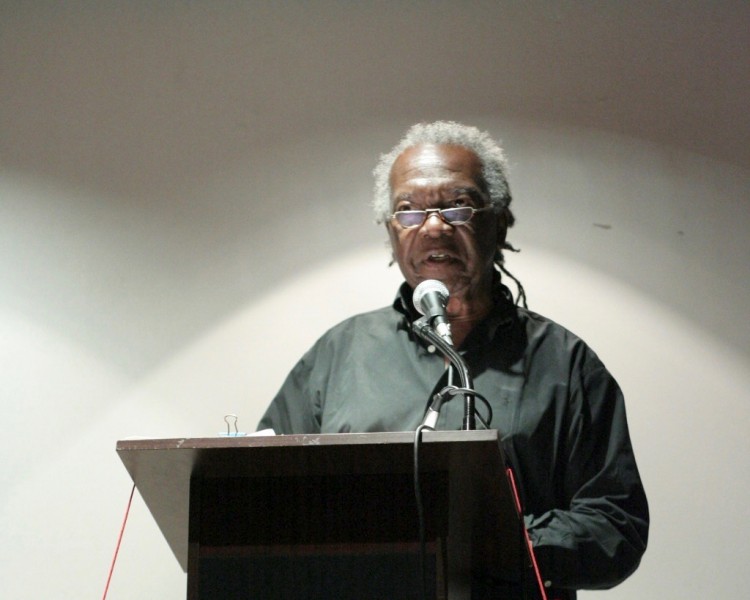 The Caribbean literary world is in mourning after learning of the death of Barbadian-Canadian writer Austin Clarke. The 81-year-old passed away on Sunday, June 26, 2016.

Clarke left Barbados in the mid-1950s to pursue his tertiary education at the University of Toronto; he became involved in the civil rights movement and began writing, publishing his first novel, The Survivors of the Crossing, in 1964. Through its main protagonist, — a canecutter — the story examined the effects of colonialism and slavery on politics and race relations in a pre-independence Barbados, but Clarke was perhaps best known for his novel The Polished Hoe, which won numerous literary accolades, including the Scotiabank Giller Prize (2002), the Commonwealth Writers’ Prize for Best Book Overall and the Trillium Book Award (both in 2003). Five years prior, he was also made a member of the Order of Canada.

Upon news of his death, tributes began to pour out on social media. Facebook user HoneyJam Barbados posted:

RIP to Literary giant Austin Clarke who died today in Toronto. He won many prestigious international awards for his writing. He was brilliant, witty, fearless, an activist, a poet, a humourist, an intellectual, always questioning and challenging the status quo, always holding people to account, sometimes courting controversy but willing to suffer the consequences of his opinions and convictions. He spoke his mind unafraid, he stirred the pot, he wanted us to know our history, to know our country, our culture, to not be ignorant of it, to look at ourselves and to always strive do better. He was widely acclaimed and celebrated but remained himself always. He was a citizen of the world but always belonged to Barbados. He was a proud native son.

A huge loss. An important voice not just for Canada and the Caribbean but for the world

Indeed, Canadian netizens were also proud to claim him:

#AustinClarke wrote his first novel before Frye said “where is here,” before Atwood, before Munro. He is a foundational Canadian author.

Can't emphasize enough how significant a presence #AustinClarke was in Canada's literary firmament in the 1970s. A pioneering voice.

Trinidadian Jonathan Ali shared the effect Clarke's writing had on him:

RIP Austin Clarke. His very funny memoirs Pigtails ‘n’ Breadfruit and Growing Up Stupid Under the Union Jack are among my favourite volumes of Caribbean biography.

On the heels of the UK's European Union referendum, one Twitter user cheekily recommended the latter of those titles to Britons:

#AustinClarke was an amazing writer, & even penned this guidebook for a whole new post-#Brexit generation in the UK pic.twitter.com/1Xqr7fVJGr

On the Facebook page Black Canadian Veterans Stories of War, the son of a Barbadian war veteran and poet posted a personal photo of a smiling Clarke in a tuxedo, pipe dangling from his mouth, explaining:

My dad's friend, author Austin Clarke passed away today. Both were born in Barbados and both loved poetry. Sentimemtal shot of Mr. Clarke, taken by my dad WWII veteran and Poet…Owen Rowe.

The Bocas Lit Fest — one of the Caribbean's most well regarded literary festivals — also acknowledged his passing:

Clarke's 2015 memoir, ′Membering, was longlisted for the 2016 OCM Bocas Prize for Caribbean Literature.

On Twitter, Austin was remembered as gracious, generous and an authentic literary talent:

Intelligent. Charming. Fun. Generous with emerging writers. We were lucky to have him. #AustinClarke https://t.co/NXeebVjr7Y

Austin Clarke: a man of unapologetic wisdom. Thank you for re-shaping & redefining Can lit. #austinclarke #ripaustinclarke

Other netizens — prolific writers and avid readers themselves — thought that Clarke's passing required taking a step back. Rhoda Bharath posted a photo of Clarke, saying:

I have to pause for this.
Transition well.

Patricia Worrell, who was weary of all the great losses the region has borne for the year thus far, added: