The Caribbean Considers the Ripple Effects of Brexit 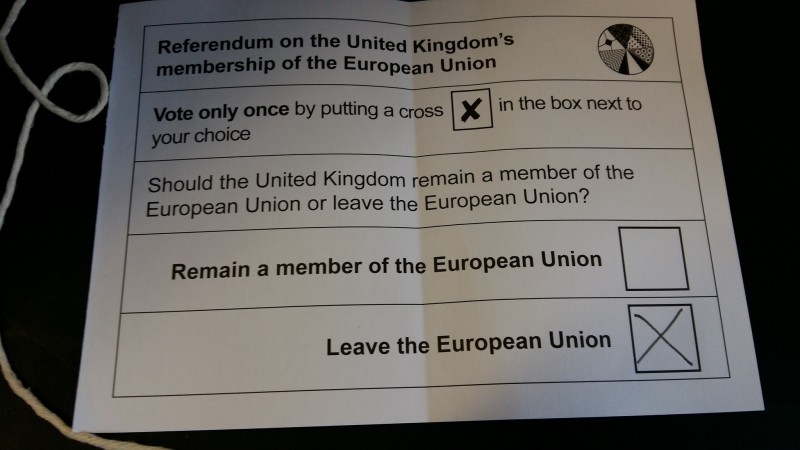 The startling results of Brexit, the UK's referendum about whether or not to remain part of the European Union, has left not only Britons and their fellow Europeans — but also the rest of the world — in complete shock. The June 23 vote resulted in 51.9 percent of the UK voting to leave, and 48.1 percent voting to remain.

The value of the British pound nosedived after the results were revealed and there are already rumblings in Scotland — which held its own referendum two years ago to determine whether it should be independent from the rest of the United Kingdom — that it will likely stage another referendum, given that many Scots believe they've been removed from the EU against their will.

Indeed, millions in Britain already want a second EU-related referendum, and there is a petition now circulating that essentially calls for a do-over, demanding that the government implement a rule requiring a new vote “if the remain or leave vote is less than 60 percent based on a turnout less than 75 percent”. The British Parliament tables issues for debate once petitions attain more than 100,000 signatures. At the time of this writing, the petition calling for a second referendum has more than 3.2 million signatures.

Caribbean netizens are also concerned about the domino effect of Britain's decision on trade, as well as on revenue streams like remittances. Many of the concessions that the region enjoys with the EU trading bloc are connected to many of its territories’ membership in The British Commonwealth.

The whole world fervently followed yesterday’s referendum that decided whether Britain left or remained in the European Union, because Brexit has truly global ramifications […]

To me, the whole debate really comes down to one thing: do you want to connect with others or go it alone? […] So yesterday’s vote, for me, was a vote on our own development, as a species, and a measurement of our own hope in ourselves. It delights me that Germany, the nation that twice led the world into war in the last century, is leading the global movement towards widespread, cooperative international peace. The same German state that murdered six million Jews barely 71 years ago […] voluntarily made space, last year, for a million refugees.

If that isn’t the best part of us, we’ve got nothing good going for us at all.

In fact, he suggested that if his own region continued to act in a similar manner to the UK, he'd be a candidate for leaving the Caribbean himself:

I know this for sure: gay, lesbian, bisexual, transgender, intersex – what-firetrucking-ever – people are people, human beings with human rights, and they are facing the same hatred that black people have endured from the time they arrived in the New World.
And if my own people – English-speaking West Indians, the bulk of whom have been treated as inhuman for the bulk of our history – cannot recognise the humanity of others, I vote to reject my people as easily as Britain rejected Europe yesterday.

Sad sad day. End of an era of breaking down walls, of globalisation, of multiculturalism, of state backed tolerance. Seriously those of you who voted out of fear and ethnocentrism your world became much smaller and isolated and you ruined it for everyone. For now. In solidarity with my friends who voted in: You are the best of the British and will be instrumental in turning things around. Cameron will go down in history as an idiot.

‪#‎Brexit‬. When the British Pound is at 3.64 to the lowly Eastern Caribbean Dollar, you KNOW you've screwed up.

Do the English fear brown people that much that they're willing to tank their own economy?
That says a lot.

Hmm, I don't know why I expected better from the UK. Disappointing. Isolation can't be the solution in 2016!

Many Caribbean netizens — some of whom have strong ties to England — couldn't help but feel sidelined by the final results. On Twitter, Trinidadian artist and activist Attillah Springer wrote:

Listen if they doh want me in they place no problem. Europe cold and have no mangoes. #AfricanUnion #CaribbeanUnity #downsouth

She then went a step further, saying:

To Facebook user Rhoda Bharath, knowing that border control was a key issue in the Brexit debate, the paradox was clear:

Many Internet users throughout the region shared the meme pictured below, also mocking the irony of Britain's fear of immigrants: 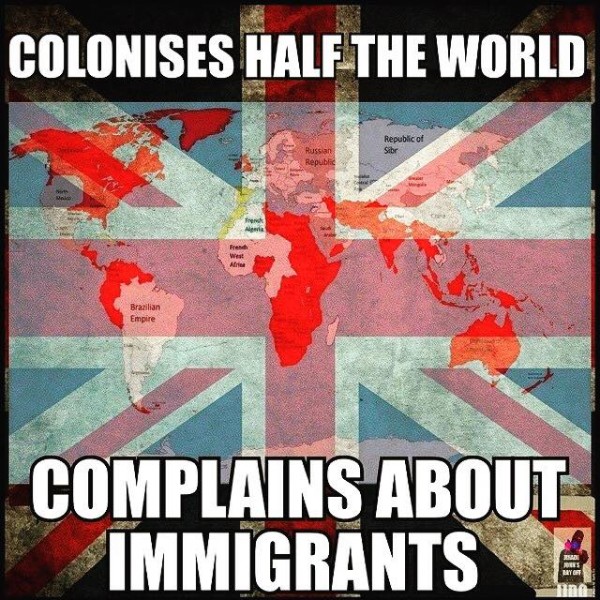 Memories of a Failed West-Indian Federation

For many regional netizens, the Britain-EU divorce brought up painful memories of its own unconsummated union. Back in 1958, an attempt at a Caribbean political federation began, lasting just more than four years. The hope was that islands that were still British colonies would band together for a common goal: to gain independence from the mother country as a single state. But internal political wrangling led to its untimely demise. The revered Trinidadian calypsonian The Mighty Sparrow famously sang about it:

At the time, there was a lot of finger-pointing at both Trinidad and Tobago, the intended headquarters of the federation. Jamaica caught some flak, too. Independent journalist and Facebook user Wesley Gibbings quipped:

Brits vote to leave the EU because: 1. We can do fine all on our own, thank you; 2. All ah dem people from all dem poor country coming in we country free free; 3. What we getting for de money we putting in dis thing? 4. All dem people goods coming in jess so, jess so. Dat cyar be right!

Why does all of this sound so eerily familiar? Eh, T&T? Eh, Jamaica?

“Brits vote to leave the EU because: 1. We can do fine all on our own, thank you; 2. All of those people from all those poor countries are coming into our country freely; 3. What are we getting for the money that we putting into this thing? (meaning the EU) 4. All those people’s goods are coming in [to our country] just like that. That can’t be right!
Why does all of this sound so eerily familiar? Eh, T&T? Eh, Jamaica?”

This must be how not having the Federation felt in 1958?
Im depressed and up in my feels on this.
‪#‎Brexit‬
‪#‎EU‬

With all this happening, the Trinidad-based satirical website The Late O'Clock News couldn't resist taking a fresh stab at Jamaica:

The Jamaican Attorney General Marlene Malahoo Forte says that Jamaica will soon hold a referendum or whether or not it remains a member state in the Caribbean Community (CARICOM).

She says that Friday’s ‘Brexit’ victory inspired her to push for this movement.

‘Brexit made me think back to the good old days when Jamaica destroyed Dr Eric Williams’ dream of unified Caribbean integration. And I thought wow. What are we as modern day Jamaicans doing to live up to the standards of our forefathers. I felt so inspired. […] I reminded the Prime Minister that Jamaica has to proudly uphold its proud reputation of being proud. Boycotting T&T products is good; but it’s not enough. So that’s how I decided that the natural next step is to launch Jamaicaway…

Members of the Caribbean diaspora living in the United States were also troubled by the implications of Brexit. The blogger and science fiction author Tobias Buckell explained that one of the reasons he so valued his UK passport was because of the “knowledge that it gave […] the ability to plug into a larger community of 300 million”:

This has been one of the biggest cutting off a nose to spite a face scenarios I think I’ve seen. It’s stunning. I’m still sorting through my reactions.

Basically, when Donald Trump, Iran, Moscow, and right-wing racist groups are all totally psyched, you fucked up.

Buckell wasn't the only diaspora blogger who made connections to Trump. Trini Like Salt, who was not pleased about Britons’ decision, wrote on Tumblr:

Watching with apprehension as the West continues its stampede to the far right.

You know that your foreign policy ideas probably were not as well thought out as you hoped when you find US presidential candidate Donald Trump agreeing with you.

‘I think it is a great thing,’ said Trump. ‘Basically, they took their country back.’

That’s one way to look at Britain’s decision, via a referendum, to quit the European Union. Another is that a nation whose empire once stretched across the globe is now so insular and deluded, it prefers to pull down the blinds, take the phone off the hook and pass the time reminiscing about Queen Victoria. […]

Faced with the challenge of learning to get along with its neighbours for the common good in a world that is shrinking by the minute, Britain chose a short-term, knee-jerk reaction. […] It was a very good day for bigotry.

This, Too, Shall Pass

Some Internet users took a more relaxed view of the Brexit developments. In a Facebook post, Laura Beadon, who lives on the outskirts of London, wrote:

What's done is done and we cannot change it […] This should be the perfect opportunity for the people to come together and put some drive and motivation into the life of this country.

This is not about democracy. It is about a successful PR campaign. For the most part, these issues are complex and multi-layered and usually beyond the interest and/or comprehension of the general public. Very few people are willing to wade through all the information.

Like many West Indians who were fans of the dry humour of British television comedies, Ramnauth immediately saw parallels:

From Jamaica, UK-born Emma Caroline Lewis soon shared a link from the same show on Facebook — a hilarious, satirical take on why Britain really joined the European Union in the first place: