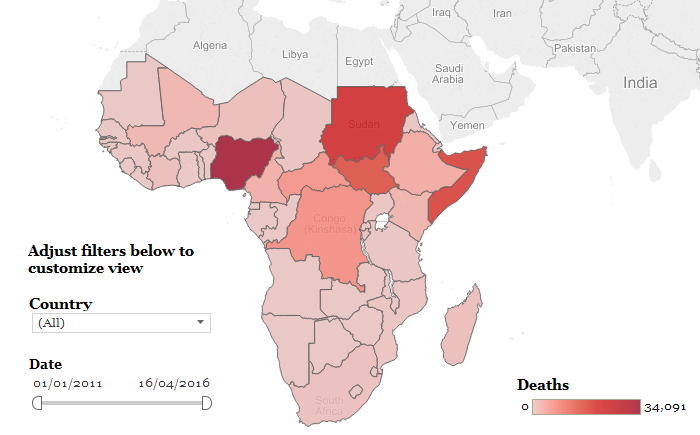 A screenshot of the Sub-Saharan Security Tracker (SST) .

The Council on Foreign Relations is a nonprofit think tank and publisher that deals with U.S. foreign policy and international affairs. Under the leadership of John Campbell, its Ralph Bunche Senior Fellow for Africa Policy Studies (Campbell has extensive experience in U.S. policy towards Africa and has helped highlight the continent's fight against HIV/AIDS), the Council has launched a useful tool — the Sub-Saharan Security Tracker (SST) — to monitor trends in political violence in 48 countries across Sub-Saharan Africa.

Designed by Allen Grane and Asch Harwood, the tracker draws on data from the Armed Conflict Location and Event Data (ACLED), which documents violence in Africa by surveying open sources, reports from non-governmental organizations, and publicly available data. The statistics, which are updated monthly, date back as far as June 1, 2011. Unlike ACLED's data, though, this tool is interactive and filters information relating to Sub Saharan Africa. This is particularly useful, considering that ACLED’s data covers more than 60 countries in Africa and Asia.

Currently, mass violence is a reality in many countries in Sub-Saharan Africa — South Sudan, Somalia, the Democratic Republic of Congo, Chad, Central African Republic, Nigeria and Mali, to name a few. Perpetrators are both state actors and non-state actors, including extremist groups such as Boko Haram, Al Shabaab, and Anti-Balaka.

According to a press statement, the tracker uses over three million data points to map deaths caused by political violence, categorizing them by geographic distribution, trends over time, and actors involved.

The data reveals meaningful trends over the past five years. For instance, a plurality of deaths associated with political violence are caused by state forces, rather than rebel forces or other militias. The group responsible for the most deaths, however, is Boko Haram, and it is followed by the military forces of Sudan and Nigeria. Consequently, Nigeria has been site of the most political violence.

The data is presented in five easily understandable charts:

The graph below shows deaths caused by political violence over time:

A screenshot of a graph from the tracker.

The tracker will allow researchers, journalists and policymakers to identify both current and future trends in violence in the region. However, the Council on Foreign Relations noted that:

The ACLED data [which is the source of their information] has limitations. The quality of reporting across sub-Saharan Africa varies, as do incident accounts. Political manipulation may affect media accounts. Such limitations make the SST figures indicative rather than definitive.