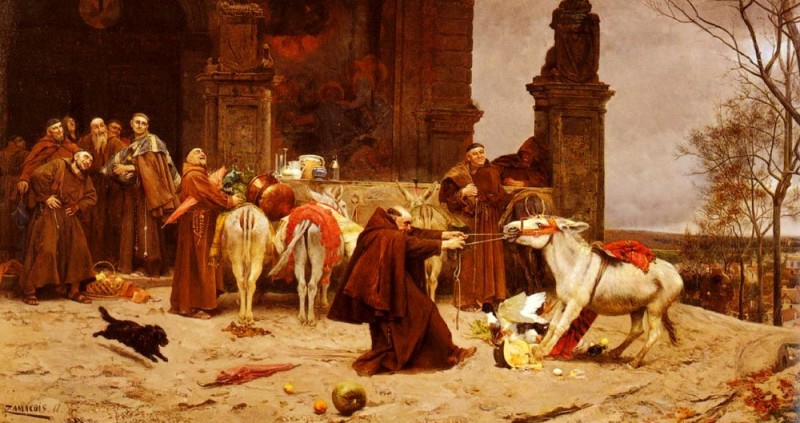 To illustrate schadenfreude — pleasure derived from misfortune of others — Wikipedia used the painting “Taming the Donkey,” by Eduardo Zamacois y Zabala (1868), in which a group of monks laughs while the lone monk struggles with the donkey. (Public Domain).

While the official reactions by most Balkan governments included expressions of concern for the European Union (EU) after the Brexit, representatives of right-wing parties expressed joy via social networks.

As Balkan Insight reported, initial official reactions from the Balkan region to the negative vote on the EU in Britain are gloomy: “Balkan officials voiced concerns on Friday about the uncertain future of the EU following Britian’s vote to leave the EU, while affirming their commitment to European integration.”

However, over the social networks, there was an outpouring of joy and schadenfreude — open gloating over the “demise” of the EU — by representatives of the right-wing political parties, both in power and opposition, including members of the Europe-wide European People's Party. While officially professing European values when speaking to their constituents, these parties often spread Euro-skepticism and Europhobia.

One of the often-repeated mantras of Balkan nationalists is “Why bother joining the EU and NATO when they will break up anyway soon, just like Yugoslavia did?” The Macedonian public recently learned that even their former prime minister, Nikola Gruevski, received such “words of wisdom” by a soothsayer that was giving him advice:

She also advises against Macedonian joining the European Union because she is worried that the ‘EU will fall apart’ and concludes that NATO will remain a factor but will be ‘artificially maintained’.

The narrative of the further disintegration of the EU was echoed by Turkish president Erdoğan, who warned that more countries will leave the EU. Deputy Prime Minister Mehmet Şimşek tweeted:

Macedonian president Gjorge Ivanov also stated, “We are worried that the EU may go down the same road as Yugoslavia.”

One of the reasons for the joy demonstrated by Balkan nationalists is the perception that the internal division would draw the attention of the EU away from its periphery, weakening its influence to demand the kind of reforms that could affect both national sovereignty and the grip on power held by corrupt elites.

One of the first public reactions to the Brexit happened the morning after the UK referendum results were announced. Vojislav Šešelj, a Serbian far-right politician who currently sits in opposition, tweeted, using metaphors from vampire folklore:

What a lovely Summer morning, and what a lovely news that overjoyed the whole Serbhood. The English nailed a wooden stake into the heart of the corpse of the European Union.

In Macedonia, there was a public uproar over a tweet by Gordana Jankuloska, the former Macedonian Minister of Interior and a high-ranking official of the ruling party, VMRO-DPMNE. She mocked the British decision to leave the EU by tweeting “Now what?” to the British Ambassador, Charles Garret:

Jankuloska has benefited from a UK government scholarship in the past. Her choice of words, “Now what?” (“Sega šu prajme?”) is similar to the form of “What's up?” (“Šu praiš?”) she used when speaking to her confidant, the then Minister of Finance Zoran Stavrevski, in leaked wiretaps related to ongoing investigations of high level political corruption by the Special Prosecutor Office. Jankulovska is one of the chief suspects in the case.

In 2015, the opposition used the term “Šu praiš” to mock Jankuloska — including through the use of graffiti, which the ruling party then covered over. Her attempt to reclaim the phrase can be interpreted as announcement of her impunity from the allegations of organized criminal activity contained in the wiretaps. Her tweet was re-tweeted by other right-wingers — including some current ministers — but it also received hundreds of replies, with many stating: “Now, you will go to jail.” 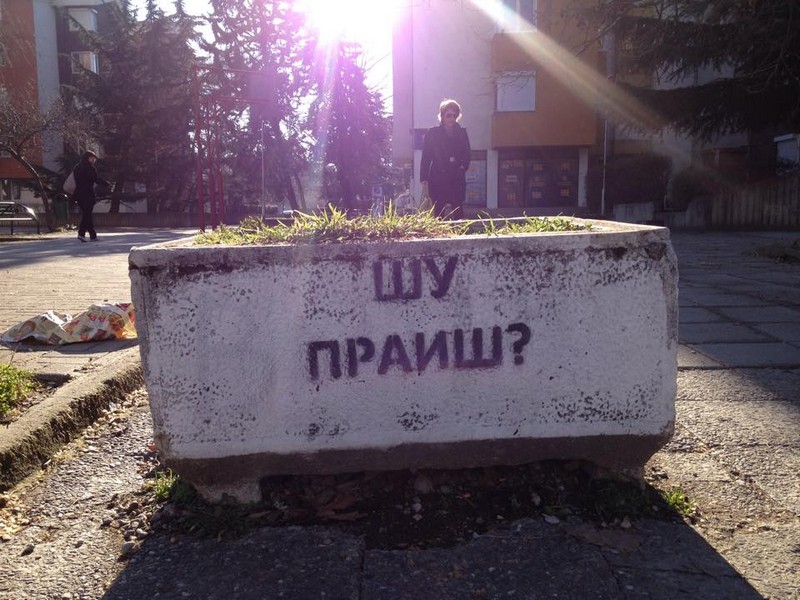 Some populist politicians used the outcome of the British referendum as an excuse to advocate for holding other referendums in areas under their control.

For instance, the President of Republika Srpska (RS) Mirolad Dodik, the Bosnian Serb entity, stated his commitment to the process of joining the EU, but also noted that the Brexit served to “affirm the additional strength of referendums as final decision on national issues, and that would serve the RS in some future.” Hinting at the desire for secession from Bosnia and Herzegovina, he added that the right to hold referendum was “sharply denied” to RS so far.

In Serbia, the anti-EU Democratic Party of Serbia demanded that the president fulfill his promise and organize a referendum on the entry of Serbia into the EU and NATO. Such a referendum would supposedly undermine the pro-EU efforts of Prime Minister Vučić.

In Slovakia, the far right party Kotleba – People's Party Our Slovakia launched a petition for a referendum on EU membership.

Mirroring some of the sentiments from the rest of Central and Eastern Europe, Ingo Mannteufel, the manager of Deutsche Welle Europe Department and the editor of DW in Russian, commented that while official Russian reactions would be diplomatic, the Kremlin would privately celebrate, as the EU would now be busy with its own woes. Brexit fulfiled the Russian goal to draw the Balkans further from the EU:

Currently we cannot speak of further EU enlargement. This is bad news for all Ukrainians, Moldovans and Georgians: expanding the EU by joining of former Soviet republics or Balkans states will be postponed to a far-away future. Now it is also hard to imagine that the EU would abolish the visa regime with Ukraine and Georgia.

However, one of the most re-tweeted tweets on the Brexit was optimistic and unorthodox, given the source. It came from the German Foreign Office, at the end of the long day after the referendum results were announced.

We are off now to an Irish pub to get decently drunk. And from tomorrow on we will again work for a better #Europe! Promised! #EURef 🇪🇺