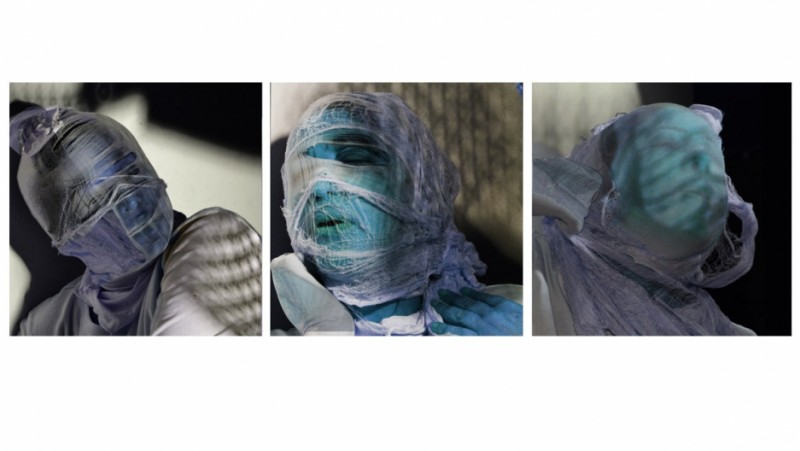 Jumana Jaber's project called “Chemo Therapy and Chemical Weapons.” The Syrian artist says it juxtaposes her experience with breast cancer in 2006 with the Syrian government's attacks on its people now. Credit: Courtesy of the Institute for International Education

This article by Jason Strother originally appeared on PRI.org on June 21, 2016, and is republished here as part of a content-sharing agreement.

Jumana Jaber has taught visual arts at Montclair State University in the US state of New Jersey since 2013. It’s been a little different from her job teaching art and theater design in the Syrian capital, Damascus.

Jaber and her family of four are among the millions of Syrians who have fled their country since the start of the civil war in 2011. But they aren't living in the US as refugees. Instead, they arrived with the help of the New York-based Institute of International Education’s Scholar Rescue Fund. Since 2002, the program has helped connect about 650 persecuted intellectuals (many from Iraq and Syria) with schools in the United States or in other safe countries. The fund splits the cost of settling academics and their families with a host institution for the first two years. It also arranges their J-1 exchange visitor and companion visas. 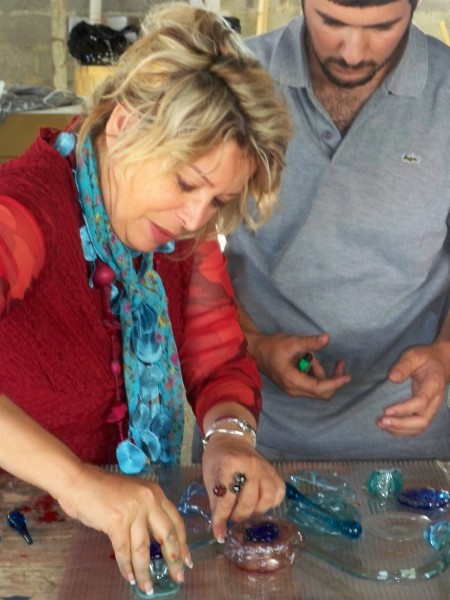 Jumana Jaber fled the war in Syria and now teaches in a college in New Jersey Credit: Courtesy of the Institute of International Education

Sarah Willcox, the fund’s director, says Jaber and her family are typical of the people that the fund seeks to help.

“They are often dissidents,” Willcox says. “Scholars are targeted because they are recognized and respected people in their community.”

In Damascus, Jaber made art with political messages, including paintings that incorporated parts of chairs, which she says are symbols of power in Syria.

“The president, the boss, the sheikhs who say this is halal and this is not halal, you can do that, you can’t do that,” she says. “They control everything, these people who sit in these chairs everywhere.”

As the uprising against the Syrian government devolved into civil war, Jaber says her commute to work outside Damascus became nearly impossible. Then the university where she worked along with her husband, a ceramic artist, came under attack.

“We took the students to the basement,” Jaber says. “Some of my colleagues were killed.”

Jaber’s oldest son, Yazan Al-Hajari, also got caught up in the unrest. At the time, he was studying classical music at a Damascus conservatory and had his own band. 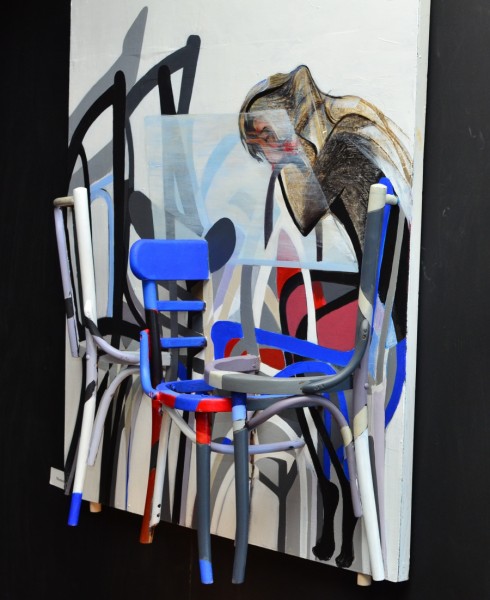 Chairs are symbol of power in Syria, says Syrian artist Jumana Jaber. Credit: Courtesy of the Institute of International Education

“When the revolution started in Syria I had to make a decision,” says Al-Hajari, now 31. And after witnessing the force used to put down the revolt, he sided with the revolution — politically and musically. Al Hajari was detained a few times for speaking out against the government. He also wrote a satirical song critiquing Syria’s leaders and media. After uploading it to YouTube in 2012, he feared for his safety and fled to Beirut.

Eventually, the rest of the family also escaped to Lebanon, where Jaber was introduced to the Scholar Rescue Fund and offered the teaching job in New Jersey. The family now lives in the suburban town of Nutley, about 16 miles outside of New York City.

But they’re in the country on temporary visas. So Jaber, her husband and their two sons are applying for refugee status — a process that could take years.

Jaber says she feels free to create art here in the US that she never could have made in Syria. Her family is worried about rising anti-Muslim sentiment following the attacks in Orlando and San Bernardino, however — even though they aren't religious. Jaber says she tries not to let the atmosphere get to her.

“It’s hurts me a little bit,” she says. “But I have wonderful colleagues and friends and they understand our situation.” 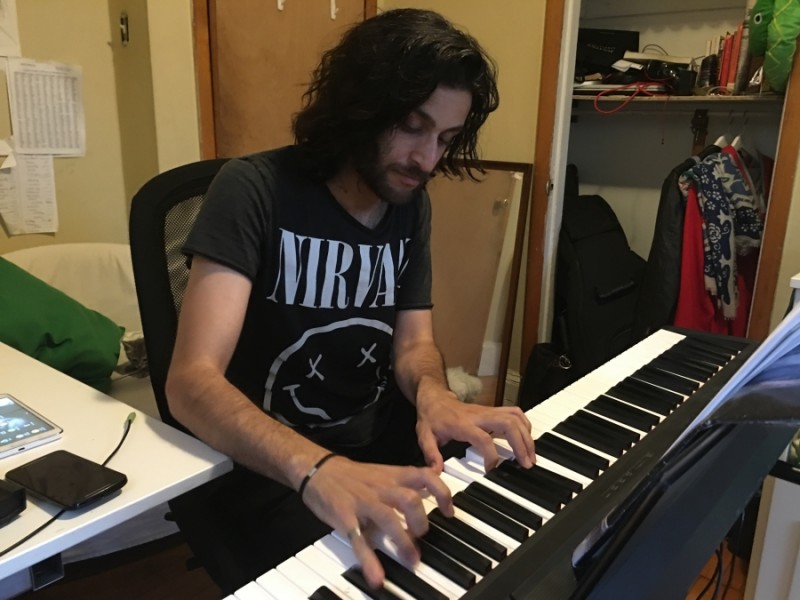