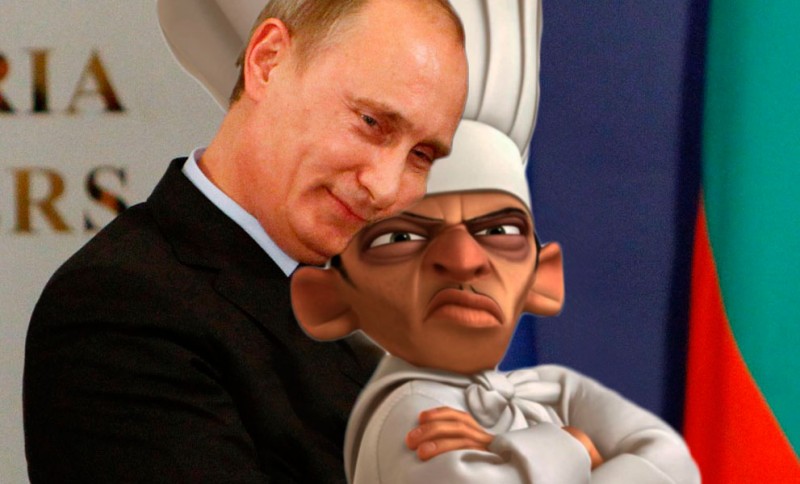 Vladimir Putin and what is probably his favorite chef, besides Evgeny Prigozhin. Image by Kevin Rothrock.

There have been more than half a dozen attacks on political activists in St. Petersburg since the beginning of the year. One man's skull was broken. Another man's face was smashed. Several people lost their cars in arson attacks. Dozens more people have been threatened and bullied online. The victims have been members of Russia's anti-Kremlin opposition, but they're ordinary activists, not the movement's leaders.

Victims believe they are being targeted because of texts and photos they've shared on social media. This, apparently, has been enough to enrage certain anonymous, self-proclaimed “patriots.”

Until recently the attacks generated little media attention in Russia. Finally, three victims managed to find each other online. After speaking to each other and realizing that they'd been targeted in patterned attacks, they approached the independent newspaper Novaya Gazeta. In late May, the newspaper published the stories of Danila Aleksandrov (a volunteer elections monitor), Yulia Chernobrodova (an activist), and Aleksander Markov (a former DJ who now manages the anti-Kremlin online community “Crime Governance”). Police have taken some action regarding these attacks, but without any results.

Earlier this month, in June 2016, the news site Meduza published a report about attacks on Aleksandrov, Markov, and others in St. Petersburg, finding that assailants apparently used a single common source of information to plan the assaults: a website called “Who Is Who,” which presents itself as a Ukrainian website concerned about the new government officials and politicians that came to power following the Euromaidan revolution. Who Is Who has two main types of content: dossiers on Ukrainian politicians, and pro-Kremlin news stories.

Recently, the website even held a contest, promising to pay 500 roubles (merely $8) for every “valuable” report. On Who Is Who, you can find all kinds of personal data belonging to Ukrainian politicians and Russian activists unfriendly to the Kremlin, including taxpayer’s numbers, photos, home addresses, and the names of people's relatives. The website lists various individuals in “whitelists” and “blacklists.” The victims of the attacks in St. Petersburg can be found on Who Is Who's blacklist.

For months, there was no hard evidence directly linking Who Is Who to the attacks on activists, and it remained possible that the website only inspired or mirrored ongoing bullying aimed at the Kremlin's critics. (Hate groups that mobilize online are not unheard of, in Russia and elsewhere.)

On June 21, The BBC's Russian-language service published an investigation on the “Who Is Who” project. Journalists found a woman who previously worked for a PR agency hired by “Wikiblogger,” the original version of Who Is Who. She said the project is poorly organized, claiming that most of the team quit when the website began hemorrhaging money in 2014. This woman says the project director was a woman named Yekaterina Petayeva.

The BBC’s Andrei Soshnikov contacted Petayeva, who only admitted to working for Wikiblogger for a month as a freelancer, though reporters say they obtained documents showing she worked there for at least six months. Petayeva said she couldn't remember the names of any of her colleagues at Wikiblogger, and refused to say who exactly hired her to dig up activists’ personal information. She also threatened to sue the BBC.

The anonymous cyber-group “Anonymous International” has leaked emails mentioning Wikiblogger. According to some of these messages, the project was financed by people close to Evgeny Prigozhin, a wealthy catering-company owner who's known widely as Vladimir Putin's “personal chef.” Prigozhin is also believed to have financed the infamous “troll factory” operating outside St. Petersburg, spreading pro-Kremlin Internet content on social media.

Earlier this month, Prigozhin filed a dozen lawsuits against the Internet search engine Yandex, seeking to make use of Russia's new “right to be forgotten.” He's demanding the removal of search results tying him to reports that he funds the troll factory, reports about his shady business dealings (particularly involving government-procurement contracts), and more. The St.-Petersburg-based news website Fontanka has devoted special attention to Prigozhin's nefarious “empire.”

Last month, in May 2016, Fontanka released footage of police detaining Prigozhin's private motorcade, showing how law enforcement ripped from the front of one of his cars an illegally-installed siren (which Russian officials use to pass through traffic). On June 21, the website published a report accusing Prigozhin of masterminding a spying campaign against its journalists, as well as cyber-attacks intended to steal reporters’ personal data. One victim of these cyber-attacks was Denis Korotkov, a Fontanka reporter who's exposed Prigozhin's role in the “troll factory,” his questionable contracts with the military, and his business dealings in places like Syria and Ukraine. Fontanka also hints that the police could be supplying information to the people attacking activists and journalists. Five of Prigozhin's companies, incidentally, are managed by former law enforcement officers.

On June 24, the Kremlin's spokesman, Dmitry Peskov, said Russian officials would not investigate the allegations against Prigozhin, calling the allegations “baseless” defamation.