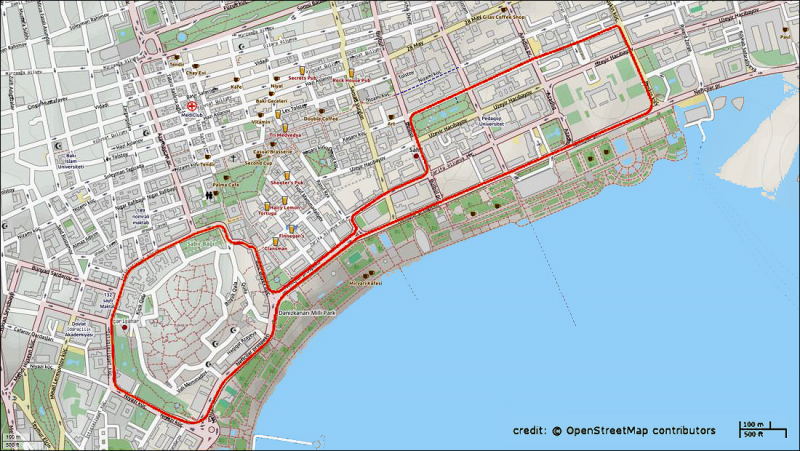 When Mirzabite Abdullayeva, a 21-year-old mother gave birth to triplets on June 21, she had little inkling that two of her three newborn babies would die in their intensive care basins within hours of their birth due to an electricity outage at the hospital and a malfunctioning generator.

According to independent media in oil-rich Azerbaijan, the baby that did survive was transferred to a hospital in Baku where its condition remains critical, and where the country had just finished hosting a showpiece Formula One Grand Prix costing several hundred million dollars amid a deepening economic crisis.

Instead of acknowledging state failure's role in the deaths of the two newborns at the provincial facility, the Ministry of Health said the newborns died before the electricity outage, and that the hospital therefore carried no responsibility.

According to the infographic below published by RFE/RL, Azerbaijan has allocated close to $500 million for its health budget in 2016, a 4.2% decrease from last year.

Both last year, when the economic crisis related to global oil's crash started to bite, and this year, huge amounts were spent on hosting the European Games and the Formula 1 Grand Prix respectively.

Defence remains the sector that receives the highest allocation in the budget pie, against the background of an increasingly combustible conflict with neighbouring Armenia over the disputed territory of Nagorno-Karabakh. 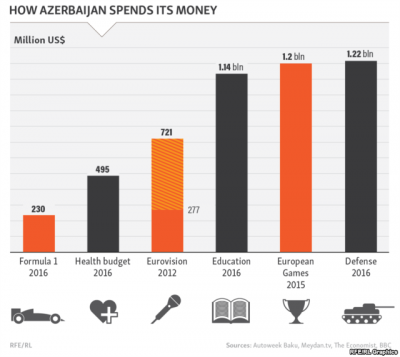 These skewed public spending priorities did not seem to bother government officials, or long-reigning F1 chief Bernie Ecclestone, who claimed his group had a “100 percent” clear conscience regarding human rights in Azerbaijan on the eve of the event's opening June 18.

His positivity was shared by Azerbaijan's ambassador to the United States: 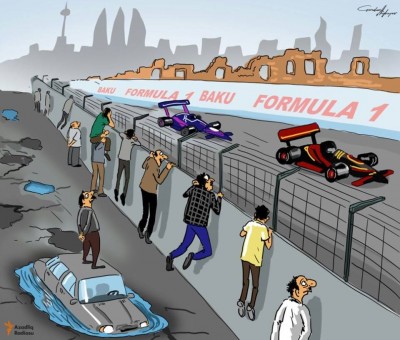 Cartoon by Azeri cartoonist Gunduz Aghayev highlighting inequality amid the glamour of the F1 Grand Prix.

Independent media and human rights activists in the country have a different take.

Meydan TV, a dissident media outlet based in Germany, put together an alternative F1 race circuit for readers that digs beneath the Baku glitz revered by Ecclestone.

Titled “Race for Truth: Explore the Stories behind the F1 Circuit”, Meydan's multi-layered, multimedia storytelling format brings readers stories such as “A Hard time for Pensioners”, “Two Faces of Baku”, “Tale of Two Schools” and “Downtown Baku: Playground for the Rich” all themed on the inequality and social injustice that has plagued the Caucasus country under the long-reigning Aliyev regime.

While taxpayers ultimately foot the bill for this, two privileged citizens have been massively enriched by the games: the president’s daughters. That’s because they control an enormous chunk of the luxury hotel business in Baku. Their hotels, sporting such well known Western brands as the Four Seasons, Sheraton and the Mariott, sit at key points in the city.

The Sport for Rights campaign has also been a loud voice reminding F1 fans of human rights violations in Azerbaijan:

#BakuGP is about to start! All eyes on the track, but don't forget #Azerbaijan political prisoners @SportForRights pic.twitter.com/RWB3oZxvXm

These two Azerbaijans — one thriving and prosperous, the other struggling and downtrodden — continue to live side by side.

But with prices for the country's key crude oil export stuck at around half their 2014 levels, there is increasing uncertainty as to how long Aliyev and his regime will be able to keep this double act going.