In Denmark, Imams and Priests Square Off in a Friendly Soccer Match 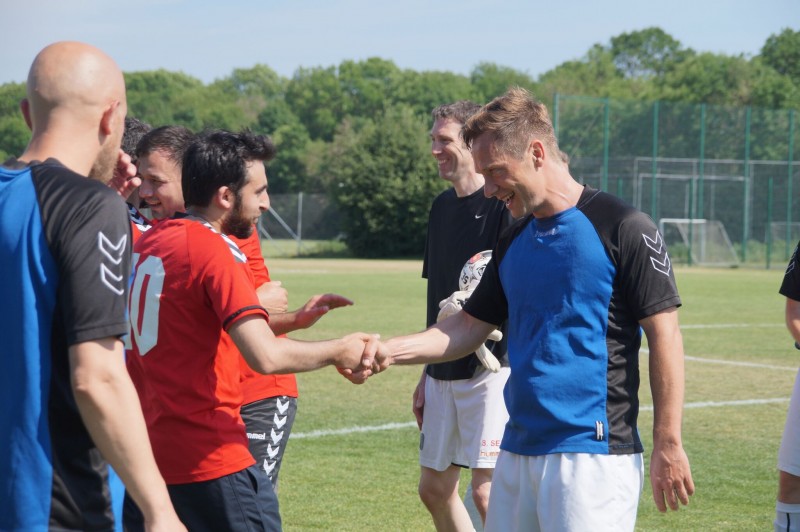 This story by Masih Sadat originally appeared in Danish on the website Opinionen. An edited version in English appears below with permission.

In early June, in Denmark, priests and imams challenged each other over a game of soccer. But besides sports and fun, this day had another, more serious purpose to it – to defy the media picture and show that Danes are perfectly able to coexist despite cultural and religious differences.

It was a Saturday mid-afternoon and the sun’s heat warmed the soccer fields in one of Copenhagen’s sport arenas. Families and friends across gender, age, religious and ethnic divides had come together and placed themselves on the sidelines, ready to act as cheering squads. From the stands, youngsters yelled “imaaams,” while other spectators clapped, rooted and drummed for the sweaty players out on the field.

If the fans were typical, the teams were anything but. On both sides of the field were religious leaders, wearing soccer shoes and ready to play. On one side were Danish priests in blue jerseys, and on the other side Danish imams in red. Both had put aside their religious uniforms and holy books for a while to focus on one thing – the ball.

One goal, one society

The match was arranged by the organization, One Goal, One Society, recently founded by Nora Omari and Mikkel Lind. Beyond soccer, fun and heat, these two had something more serious on the agenda.

Sadly, we live in a society in which religion is seen as something that contributes to creating hate between people. Many believe Christians and Muslims aren’t able to agree with each other, and we wish to break with these many prejudices … Soccer has in many cases proved to work as something that unites different peoples and religions. With the world’s most popular sport, people are gathered from north, south, east and west, in peaceful harmony. This will with certainty happen here as well.

Danish rabbis were also supposed to participate in the match on the imams’ team, but had to bow out because it took place on a Saturday – the weekly Jewish day of rest. A Danish magazine called Føljeton interviewed rabbi Jair Melchior, imam Waseem Hussain, and priest Jeppe Nissen before the big match:

Following the match, One Goal, One Society plans to arrange similar events in the future, co-founder Nora Omari said.

Our primary aim will be gather people across religion, culture, skin color, ethnicity, and everything that is considered divisive in society.

Nora said she and Mikkel were inspired by a similar event in Norway, which received a large amount of support and positive feedback:

We immediately came to realize that this event is needed here in Denmark both because it’s fun and because of the negative political debate taking place. We need something that shows that we as human beings are able to live together.

The media picture is flawed

My message for today is that we should aim to look for the small things in life that give us pleasure in day to day, and that's what we should hold on to. We have to look at ourselves – not necessarily as religious, but first and foremost as human beings, and that's what we are when we play on the field. The meeting that is taking place today, for example, between Muslims and Christians, that's what will give us something. Just as on our imam team we are only nine people, but still we represent a whole of seven different nationalities and we have both a Shia player and Sunni players.

Naveed said he was saddened by the negative picture that Danish media draws of the relationship between citizens of different walks of life in Danish society – a relationship which Naveed believes is working perfectly fine. For him, diversity already exists in Denmark, not just among Muslims, but among citizens in general. This, he believes, is something Danes should appreciate and be proud of.

It is unfortunate that one has to keep telling the world that we are not each other's enemies, but I am an optimistic person and I will hold onto hope. We are all in the same boat. If one of us makes a hole in the boat, we will all sink. May God give us strength enough to stay together and create a strong cohesive power for each other and for everyone in Denmark.

‘Religious people are able to function together’

In the opinion of all of the players, the event was a successful one. Especially for the imams, who beat the priests in the final match and won the trophy with a 3-1 victory. 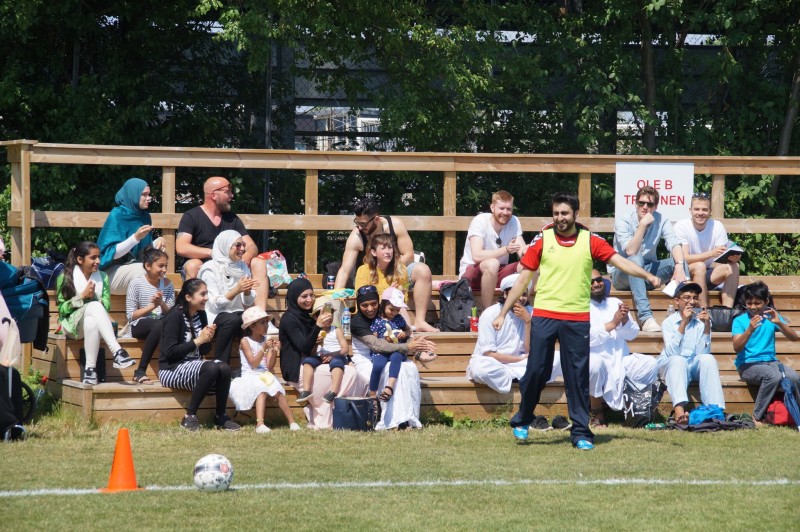 For Thomas Nedergaard, a priest at uKirke in Vesterbro (central Copenhagen), the match wasn't meant to be a superficial public relations stunt:

It was supposed to be priests and imams playing some soccer with each other and that was what we did – and it was fun. I truly hope this match will prove that we belong together rather then being apart; that there is love between us and not fear.

Waseem Hussain, an imam and chairman of the Danish Islamic Center, shared the same hope. He said he also believes that citizens in Denmark, across religions and cultures, are able to live together:

An event like the one today will help break some prejudices and show that religious people are perfectly able to function together, and that it is not worse than that. We are used to looking blindly at the problems we have, rather than looking at the solutions and the things we can accomplish together. It's like if we, for example, had a soccer field here, then we, the soccer players, could all choose to either just look at some hole, an irregularity, and just complain about it, or we could choose to say, oh well, there's a hole, a problem, but we will play the game anyways.

“And what made the day even better is the fact that we won,” Imam Naveed added, laughing.

The organizers of the match Nora and Mikkel have got big plans for their project following this success. “We will continue doing this and on a bigger scale, and hope that it will have a ripple effect.” Their next event will be women's only and possibly with other type of sports. 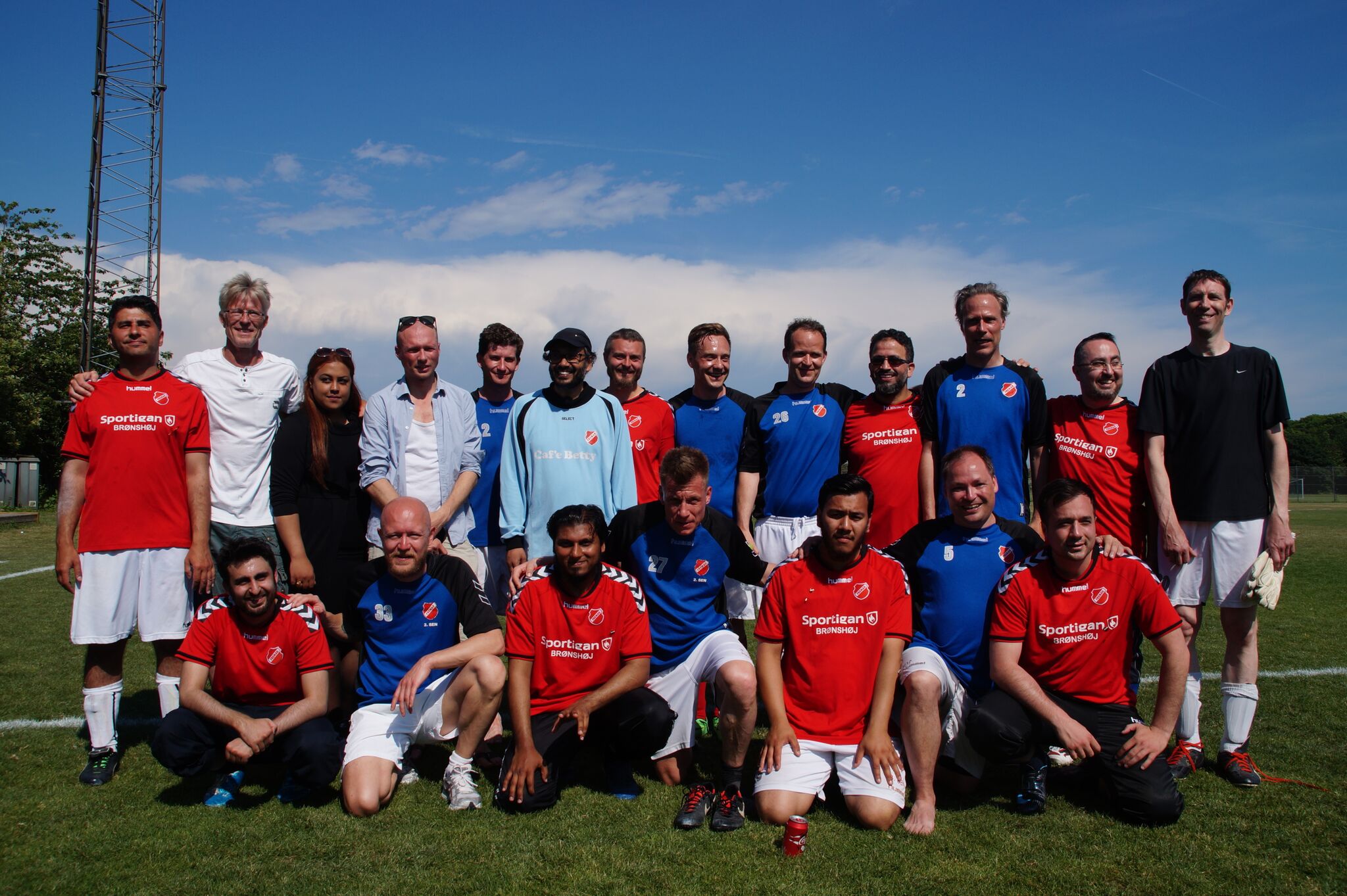